Across the nation, swaths of nine-to-fivers look forward to Friday all week long. Every week. This week, they are joined by their Democratic Party representatives in the lower chamber of the legislative branch of the U.S. government. House Minority Leader Kevin McCarthy of California took the podium late on Thursday night and slammed the president's $1.75 trillion-ish "Build Back Better" bill, saying, "This is the single most reckless and irresponsible spending (bill) in the history of the country."

That's not all McCarthy said. Indeed, he went on, and on, and on, discussing various off-topic items such as migration at the southern U.S. border, COVID-19 restrictions and his Democratic Party political opponents at large. McCarthy dragged his address on for over eight hours, forcing those opponents to delay a vote to pass the social/education/climate issues bill until 08:00 ET Friday at the earliest.

This vote had been delayed for weeks already by the fiscally moderate wing of the Democratic caucus as they waited for the CBO (Congressional Budget Office) to score the bill that the administration had often either mistakenly or erroneously referred to as "fully paid for." Readers must understand a few things prior to trying to understand the fiscal impact of this bill.

The White House currently projects this bill ultimately will add $112.5 billion to the federal deficit over a decade, while the CBO sees that number closer to $367 billion. The lion's share of this difference comes from a gap in what the $80 billion that the bill spends on increased IRS income tax enforcement might bring back in return. The CBO's bottom line does not assume any return from enforcement for a technical reason, while separately that office estimates a $207 billion return that the White House sees as $480 billion. Fact is that, over time, I find it difficult to put much faith in estimates made by either administration's (regardless of party) sources or the supposedly bipartisan CBO.

Early reports show that now after seeing the CBO's score for this bill, all but one Democratic moderate has gotten behind the bill, while those on the extreme left have also reluctantly signaled their support. This bill is expected to pass in the House. Even once passed in the House, this bill will head over to the U.S. Senate, where it has almost no chance of passage in its current form. With that chamber split 50/50 between Republicans and the Democratic caucus, and with those Republicans united, the left cannot lose a single vote and then must rely upon a tie-breaking vote by Vice President Harris.

Right now, at least two Democratic senators -- Joe Manchin of West Virginia and Kyrsten Sinema of Arizona -- are thought to oppose the bill the way it is now. There will likely be changes made (at least) to the proposed paid-leave program as well as the House-proposed increase on the SALT (state and local real estate taxes) deduction from $10,000 to $80,000 regardless of income level. There will also be problems with a measure within the bill that temporarily provides legal protection to all immigrants already inside the U.S. illegally.

At that point, whatever passes in the Senate must go back to the House for a re-vote with the Senate's changes made. Only then does an identical bill passed by both chambers head to the president's desk. So, the bill is close, but not that close, regardless of what keyword-reading trading algorithms do to markets here on Friday morning.

Readers will note that demand for the U.S. dollar, gold, and U.S. Treasury securities ramped up sharply shortly before 04:00 ET Friday. At first U.S. equity index futures moved sharply higher as well and then took a ferocious turn lower within an hour. After all that, futures moved back toward the overnight mean. This has much more to do with Europe than anything happening in D.C. Early on Friday morning, we see increased COVID restrictions being implemented across European nations currently suffering from surging levels of new infections.

This negative equity market reaction could build upon a Thursday trading session that was fairly ugly in its own right. After absolutely fantastic results were published in the Philadelphia Fed Manufacturing Index that included robust increases for New Orders, Shipments and Unfilled Orders, but also dramatic rises in Prices Paid and Prices Received, U.S. equities shaded heavily into the red despite deceivingly moderate to upside performance at the headline level.

While it is true that the S&P 500 gained 0.3% and the Nasdaq Composite and Nasdaq 100 increased by 0.45% and 1.07%, respectively, for the regular session, it's also true that eight of the 11 S&P sector select SPDR ETFs closed down on the day. Breadth was awful. Losers beat winners by a rough two to one at both of New York's primary equity exchanges, while aggregate trading volume increased significantly for names domiciled at both exchanges as well. Advancing volume comprised just 28.4% of the composite for NYSE-listed names and just 31.4% of the composite for Nasdaq-listed names. I think it is safe to say that there is some professional distribution in progress. As Helene Meisler noted in her Thursday night piece, new lows at the Nasdaq totaled 409 while new highs were just 158.

Austria is scheduled to go into a fourth nationwide lockdown this Monday. Germany is said to be considering a similar move as regions within the nation have already taken action. New infections are at record levels in Austria. Lothar Wieler, head of Germany's RKI public health institute, simply stated "The whole of Germany is one big outbreak."

Hospital beds, and more specifically ICU beds, are once again becoming a precious resource across central Europe. One statistic I find particularly scary is that Germany has fully vaccinated less than 70% of its population, lower than most of its European neighbors but higher than the U.S. If what I am reading is correct, more than 45% of hospitalized COVID patients in Germany have been fully vaccinated. That comes from the Robert Koch Institute, which is Germany's center for disease prevention.

Local leaders are blaming this circumstance on the waning protection offered by the vaccines. What I have seen did not break down vaccination by manufacturer, and that would be good information to have. Regardless, just looking back anecdotally, Europe for the past almost two years has run about a month to five weeks ahead of the U.S. on COVID trends.

Sometimes it becomes easy to forget, because we want to forget, that the virus is still in charge. Of everything. More vaccinations. More boosters. Yes, I am long Pfizer (PFE) . Can't imagine demand for protection decreasing this winter.

I just have to love Ford Motor's (F) Jim Farley. I love his aggression. Wants to be No. 1. In electric cars. In cars, period. He gets after it. On Thursday, Ford came to a strategic agreement with GlobalFoundries Inc. (GFS) to develop chips together, and potentially to end up jointly producing said chips in the U.S. The short-term goal is probably simple -- to improve product availability. The longer aim is probably to bring both design and fabrication of automotive semiconductor chips in house at Ford.

Ford wants to focus on three kinds of automotive chips -- those designed for autonomous driving, those meant for in-vehicle networking, and those specifically designed to manage battery life. I find it interesting that later in the day General Motors (GM) was in communication with Taiwan Semiconductor (TSM) , Qualcomm (QCOM) and NXP Semiconductors  (NXPI) . Coincidence? Possibly. Volkswagen (VLKAF) has also made some noise about designing its own chips going forward. 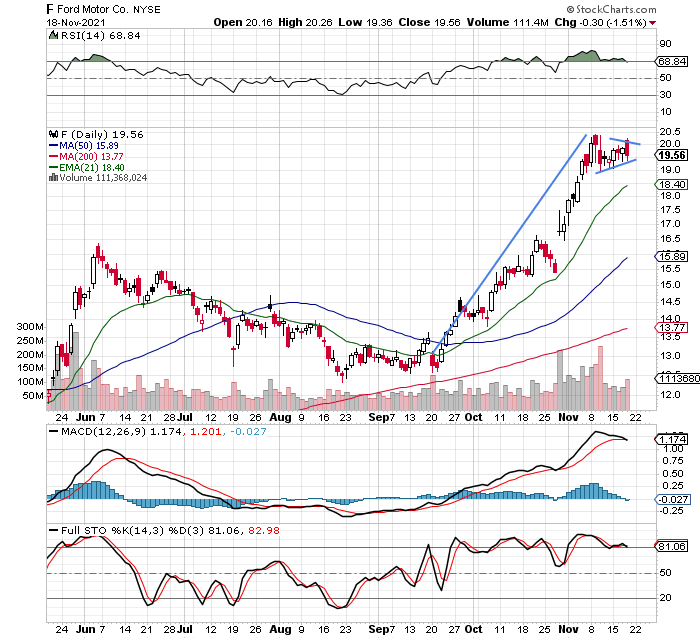 This chart of Ford Motor illustrates the same bullish flag that we have seen elsewhere at this time. The stock is currently, at least according to the metrics pictured here, technically overbought. That said, the flag is still building and would be considered a pattern of continuance.

Bloomberg News broke a story on Thursday afternoon describing Apple's (AAPL) push toward accelerating the development of an electric car with the focus on autonomous driving. Right now, according to the story, Apple is working in two directions, one with limited autonomy and one that requires no human intervention whatsoever. Can you imagine getting into a car with no steering wheel? I don't know about that, but I am old. This may not seem so strange to a child still 10 years away from learning how to drive.

Interestingly, on CNBC, Loup Ventures' Gene Munster said, "When you stack Apple up against Tesla (TSLA) in terms of tech prowess, I think that they are probably closer than you think to where Tesla is at today."

The question, I think, becomes just who does Apple team up with? The legacy automobile manufacturers? They have the assembly lines. They already have the labor force and the desired ability to scale. Almost all the highly valued electric vehicle "manufacturers" that at this point can show very little revenue sold off on this news. Perhaps, this makes one or two of them, without naming names, because I do have financial interest in the space and I do not want to start unfounded rumors, more attractive. 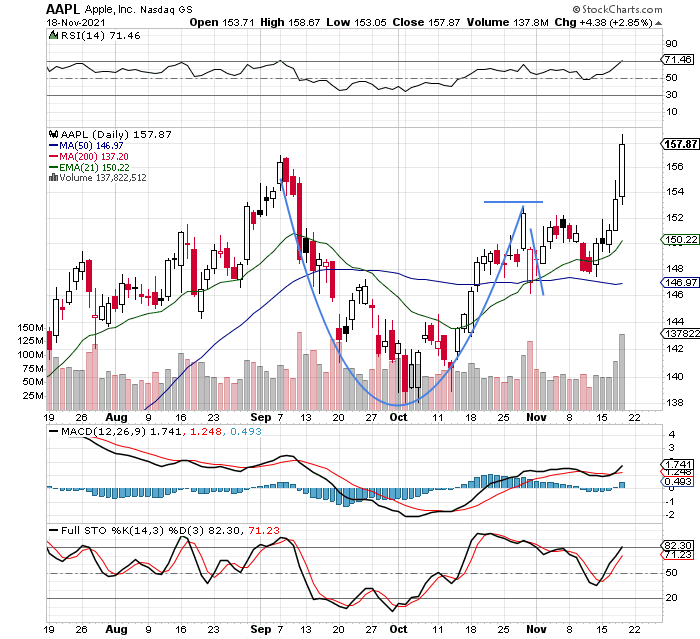 Readers will see yet another name bordering on being technically overbought. Here, though, we do not see a bullish flag, we see a traditional cup with handle pattern with what appears to be a breakout in progress.

Target Price: $190 (not the highest on the street)

(F and AAPL are holdings in the Action Alerts PLUS member club. Want to be alerted before AAP buys or sells these stocks? Learn more now.)

Get an email alert each time I write an article for Real Money. Click the "+Follow" next to my byline to this article.
TAGS: ETFs | Indexes | Investing | Stocks | Automotive | Pharmaceuticals | Semiconductors & Semiconductor Equipment | Europe | Real Money | Coronavirus | Electric Vehicles