Kreiz said Mattel's quarter exceeded all the company's expectations despite the Covid-19 pandemic. He said sales were strong in North America and Mattel achieved its highest gross margins since 2016.

Barbie was one of those strengths, he said, posting 10% revenue growth and a 35% pickup in consumer demand. That growth was led by innovations, cultural developments and original content that is creating more interest in the brand.

Cramer said he believes the turnaround at Mattel is for real.

Let's check out some real charts and indicators.

In this daily bar chart of MAT, below, we can see that prices made a low in March and then a retest in May. Prices were cut in half in the February-March decline, but trading volume was not all that heavy in March at the lower price area. The 50-day moving average line did not have a positive slope until late May and the 200-day moving average line still has a negative slope and acted as resistance this month as prices could not sustain a rally above it for long.

The On-Balance-Volume (OBV) line did not make its low until May and has moved sideways since then. This is not a picture of aggressive buying that envisions a turnaround. The trend-following Moving Average Convergence Divergence (MACD) oscillator finally crossed above the zero line in late May but now looks like it is rolling over to a take profits sell signal.

In this weekly bar chart of MAT, below, we went back four years to show the continued weakness in the stock. Prices have been in a downtrend for years. The slope of the 40-week moving average line has been negative for a long time and the OBV line does not show aggressive buying even since the recent May low. The MACD oscillator is still below the zero line after a belated cover shorts buy signal.

In this daily Point and Figure chart of MAT, below, we can see that prices reached an upside price target. This does not mean that prices cannot rally further, but it can be a reason for traders to liquidate positions. 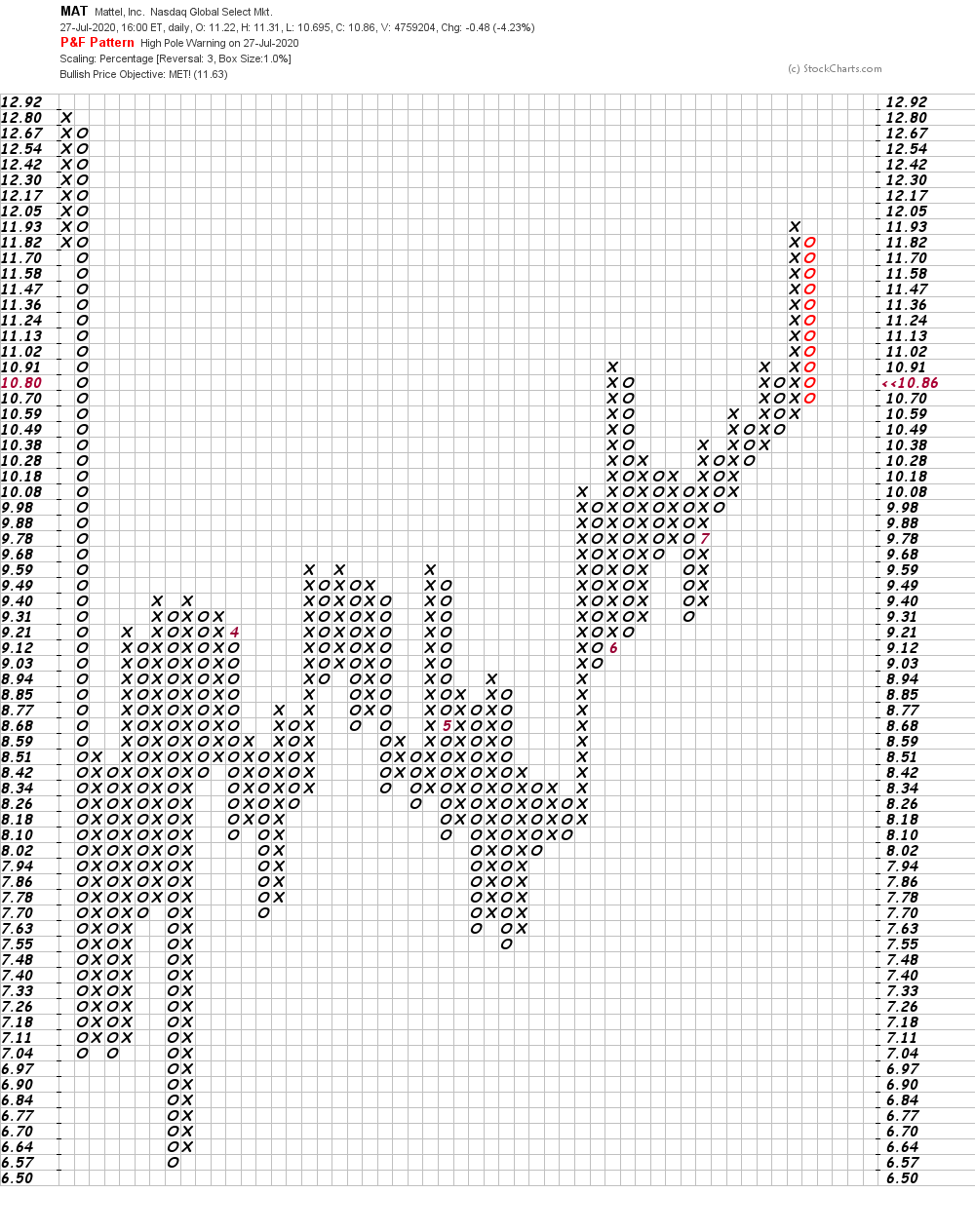 Bottom line strategy: The fundamental story at Mattel may be improving but the charts continue to disappoint and suggest more base building and sideways price action ahead.

Get an email alert each time I write an article for Real Money. Click the "+Follow" next to my byline to this article.
TAGS: Earnings | Investing | Stocks | Technical Analysis | Consumer | Mad Money | Executive Interview | Real Money