...And go away? No, this is not going to be one of those lengthy articles that ends up telling you that even though over the years the May through October period tends to underperform broader markets. (Even if it does also tend to produce a positive return.) May through October is far too long a period for traders, or maybe even investors, to ponder with any kind of certainty right now.

Equity markets gave something back on the last trading day of April. That was fairly easy to see coming, as April 2020, at least for the S&P 500, ended up being the second-best month of my career, and the best since I was a young man. We knew ahead of Thursday's opening bell that such strength would force at least a certain level of reallocation, and that the Energy sector would probably not lead as it had earlier in the week/month.

Small-caps, recently the hottest slice of the market, did give a bit back on Thursday. Trading volume at both of New York's primary exchanges shaded decisively red, that much is true. However, that volume leveled off at Wednesday's levels.

On a day that saw all eleven sectors close down for the day, both internet stocks and software names, for the most part, bucked the trend. This might have been seen as a positive, as the focus for the large-cap equity traders has been more on technical analysis than on fundamentals, unless of course one considers the impacts of policy to be a part of fundamental analysis.

All this said, the entire ballgame evolved significantly just after Thursday afternoon's closing bell. Would it shock to see the major equity indices test their 200-day simple moving averages? After some of the macro we have seen and expectations for what may lie behind the next door?

The president appeared angry. Heck, most of planet earth is pretty darned angry these days. John Roberts of Fox News asked President Trump if he has seen anything that leads him to a certain level of confidence that the coronavirus that has infected millions, killed hundreds of thousands and destroyed the global economy, might have originated at the Wuhan Institute of Virology. The president did not go into details, but did let some anger show.

The U.S. intelligence community does seem to agree with most who have studied this virus that it was not man-made, nor genetically engineered, but that does not rule out an accident, nor excuse what some see as less than optimal behavior in the aftermath.

The Washington Post reported on Thursday that U.S. officials might be exploring ideas meant to recoup financially at least some of what has been lost from the Chinese government. Ideas supposedly under consideration could be stripping China of sovereign immunity, which would allow the nation to be sued for damages. There was also talk of maybe cancelling part of the U.S. debt obligation to China, though President Trump did appear to downplay that option.

What the president did do at that press conference was suggest the possibility of new tariffs on Chinese imports. Then later on Thursday evening, Bloomberg News reported that the administration had under consideration an executive order that would in effect halt certain retirement plans in the U.S. from investing in funds that invest in Chinese securities. What ends up happening? We shall see. How broad does it go? Again unknown. Anger? Yeah, we see it.

Very early on Friday morning, Reuters reported that Moderna had come to a 10-year collaboration agreement with Swiss contract drug manufacturer Lonza AG (LZAGY) to produce up to a billion doses of this vaccine per year at Lonza U.S. for worldwide usage.

Then It Got Ugly

The closing bell had just stopped ringing. The futures responded before I could even see the numbers. The last sale for the shares of Amazon (AMZN) told me all I needed to know. Something must have not gone according to plan. We all knew that margin could be an issue. Not could be, will be. Then came Apple (AAPL) . Pretty decent quarter all things considered, increased return to shareholders... but no guidance. How could they possibly guide?

There were a number of other earnings releases for investors to ponder on Thursday evening, but Mr. Market had made up his mind. He said "sold" into the evening, and then said "sold" again as the wee hours passed. Let's explore.

Amazon went to the tape with the firm's first-quarter financial results. We all knew that demand for what this firm is best known for, e-commerce, had been immense and that the firm had taken steps that included adding payroll in order to meet that surge. Margin could be a problem. Amazon posted EPS of $5.01, earnings growth of -29%, and a sizable miss, at that. There was indeed, sizable year-over-year revenue growth (+26.5%) that amounted to $75.5 billion. This would be the strongest pace of comparable annual growth for Amazon in any quarter since mid-2018.

Across the company's segments, performance was strong. As one might expect, Online Stores experienced growth of 24% (really 35% ex-FX, to give one an idea of the surge in demand), as that line provided more than 48% toward the entire pie of revenue distribution. Amazon Web Services showed growth of 33%, which may have been seen as a very small segment miss, but not one that would stop this trader from sleeping at night. That unit remains an over-achiever in terms of margin generation. Subscription Services have experienced a dramatic pop in business during the pandemic. This would be the Prime services -- video, music, e-books, audio-books, etc.

Advertising also grew wildly, under the heading of "Other," as the e-commerce sites and the various subscription services attracted eyeballs even amid this period of reduced budgets for marketing. Why did I breeze past all of these business lines without going into the nitty gritty? Simple. Corporate outperformance in revenue generation, and better than could be expected corporate execution, is not why Amazon sold off over night. Let's look at guidance.

CEO Jeff Bezos wrote, "If you're a shareholder in Amazon, you may want to take a seat, because we're not thinking small." What is now clear as a bell is that Amazon is now in investment mode. In the business, and in the labor force, as both must respond to, as well as co-exist with, the negative impacts of the Covid-19 pandemic.

As a means to meet increased demand for pantry and household essentials as well as office supplies as many Americans fortunate enough to remain employed must now work remotely, Amazon has been aggressive. The firm added 100,000 new employees to the payroll at a time when the entire nation has been moving in the other direction. The firm has made public its need to add 75,000 more, as well.

The firm guided Q2 revenue toward a rather wide range of $75 billion to $81 billion, which at the low end, would still be 18% growth. The range offered allows for some wiggle room, but largely centers itself around what is already Wall Street consensus. The difference is this. The firm acknowledges "substantial uncertainty" around the pandemic. As for operating income, the firm now expects to see anything within a range of -$1.5 billion to +$1.5 billion. Wall Street was looking for something closer to $4 billion.

On that note, Bezos added, "Under normal circumstances, in this coming Q2, we'd expect to make some $4 billion or more in operating profit. But these aren't normal circumstances. Instead, we expect to spend the entirety of that $4 billion, and perhaps a bit more, on Covid-related expenses -- getting products to customers and keeping employees safe."

The firm will be spending on virus testing, personal protection equipment, as well as the cleansing of the firm's vast facilities, in addition to increasing wages. Amazon is investing in its business by investing in its people. That might make Wall Street sell the stock. Not me, though. Sure, I'll get hit on the nose this morning. Won't be the first time. Take a look at this: 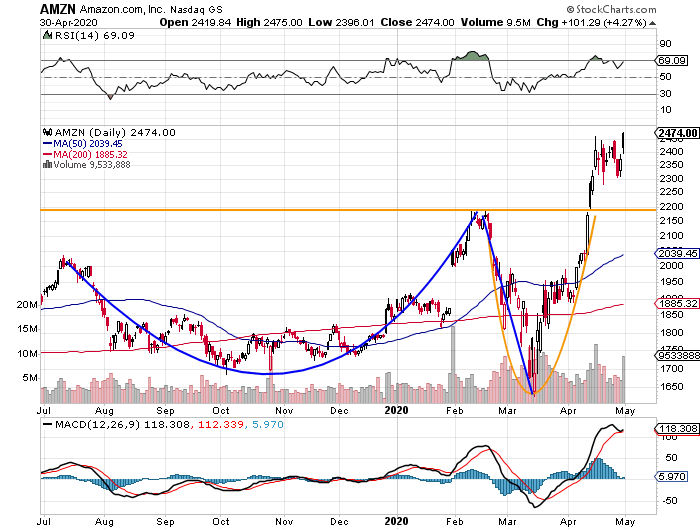 Remember this chart? I drew it up for you just a little over two weeks ago. Well, we sure did get the breakout above pivot. You may also recall that in that piece, I stated the need to add a handle to the cup, and if we saw that handle, then the pivot would shift from the left side of the cup (2185) to the right side of the cup (2475 top just yesterday). Very interesting, indeed.

Not only will I not join this selloff, depending on its depth, I may add. This commitment to the firm's employees and spate of hiring when no one else will, should, in my opinion, inspire loyalty in the ranks. The fact that the Amazon truck comes down the block every day regardless how how awful things have become will inspire loyalty among consumers.

Investing in these issues is long-term thinking and is also very smart. Just an aside, because I do not want to leave them out, Walmart (WMT) has also in my very myopic view, performed very well under pressure. Is this a two horse race? Costco (COST) ? Target (TGT) ? We'll see.

Get an email alert each time I write an article for Real Money. Click the "+Follow" next to my byline to this article.
TAGS: Drug Approvals | Earnings | Economy | Indexes | Investing | Markets | Politics | Stocks | Technical Analysis | Trading | U.S. Equity | Coronavirus