When I lived in Asia and traveled back and forth to the U.S., it was never the long flight that bothered me but the jet lag. After a long trip, I would sit at dinner with my family and my eyes would start closing, no matter how hard I tried to keep them open. It was as if my eyelids had a mind of their own and would keep slipping. Then my head would roll to one shoulder, until someone nudged me to wake up.

That's what the market feels like. It's like it really wants to stay awake (the selling isn't heavy) but the eyelids keep closing (the buying isn't heavy, either). Every time its head rolls to one side, someone nudges it to head back up again.

Just look at the market's breadth. It's not dire, it just can't keep its eyelids open. Last week the S&P 500 was flat as a pancake and breadth dripped a bit lower, not quite as bad as late February, but similar. 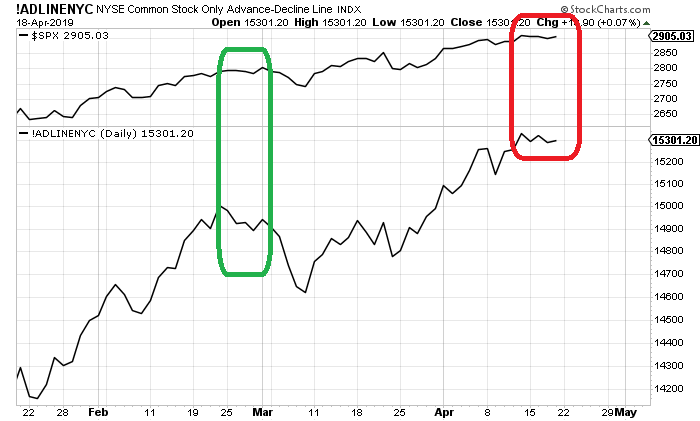 You can see it more clearly in the McClellan Summation Index, which tells us what the majority of stocks are doing: It has rolled over, and done so from a lower high (than February). It now needs a net differential of +1100 issues (advancers minus decliners) to turn it back up. In this case, the eye lids are closing and the head is rolling toward the shoulder.

More proof that the market is having trouble keeping its eyes open is in the number of stocks making new lows. The New York Stock Exchange hasn't seen a marked pick up (still fewer than 50 new lows) but Nasdaq had more new lows than new highs on Thursday. This is not how a market that is wide awake should act at its highs. The 10-day moving average of new lows is rising. If the selling in the health care names dries up, this indicator should peak and roll back over. But for now, it is up.

Sentiment is looking stagnant: complacent but not giddy. We have seen this often when a market has run far and then spends a good deal of time chopping as it tries to keep its eyes open. Every down day gets greeted with the fear that, "This is it, the correction is here." And then, every up day gets greeted with cheers for a "melt up." We saw this last week when the put/call ratio for the Volatility Index soared to a level not seen in nearly six months. That's when it zoomed to 149% (that's the "too big" bet that the VIX is going lower, stocks higher) followed by two consecutive days of readings under 20% (that's the "too big" bet that the VIX is going up, stocks lower). It is unusual to see so much emotion in an instrument that has barely budged off the 12 level.

Just to confuse the situation, the Daily Sentiment Index for the VIX is now 14. That's too low. And if it slips under 10, it will be a very strong sign the VIX is ready to rally.

The market appears to have jet lag. A good night's sleep is what would cure me when jet lag was bad. So maybe a pullback would help the market shake off its jet lag.

Watch for Follow-Through on Stocks

While a follow-through day is not a requirement, it certainly gives us more confidence that buyers are supporting a stock at certain levels.

As to performance, I'm guessing Tuttle will be even more volatile than the core ARK Innovation ETF.

Square Is Close to Hitting on All Cylinders: Here's How to Trade It

Yet I'm not all that crazy about such a reliance upon Bitcoin for performance.