Why aren't we celebrating?

The equity indices are generating more new closing highs while another index trend has turned positive.

Our primary reasons are valuation, investment advisor sentiment and the VIX sending a very cautionary signal.

The bulk of the major equity indices closed higher Tuesday with the exception of the Value Line Arithmetic Index posting a loss.

Internals were positive on the NYSE but the Nasdaq saw positive breadth although negative up/down volume.

The S&P 500, DJIA, Nasdaq Composite and Nasdaq 100 made more new closing highs while the S&P MidCap 400 closed above resistance, turning its trends to positive from neutral.

So now we find only the Dow Jones Transports is in a neutral trend while the rest are in near-term uptrends.

The cumulative advance/decline lines for the All Exchange, NYSE and Nasdaq are positive.

However, we remain quite concerned regarding the VIX at 11.74 (see below) that has been a reliable cautionary signal prior to sudden market downdrafts when investors have become complacent, as now may be the case.

The VIX chart shows the degree of elevation in volatility from these levels over the past 12 months resulting in sudden market downdrafts. 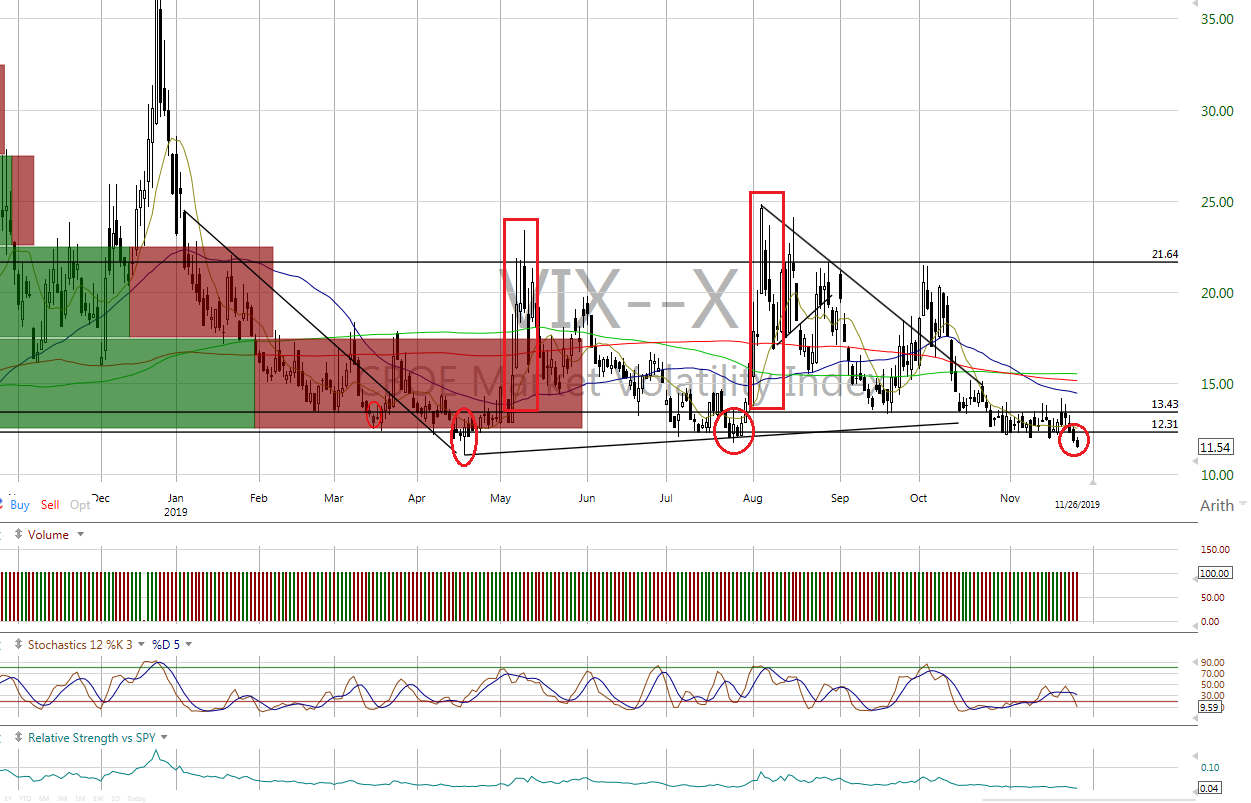 The detrended Rydex Ratio (contrary indicator) is also neutral at +0.72.

However, the Investor's Intelligence Bear/Bull Ratio (contrary indicator) remained bearish at 18.1/57.1, suggesting a continuation of excess bullish sentiment/complacency on the part of investment advisors.

The percentage of S&P 500 stocks trading above their 50-day moving averages is a neutral 65.2% as is the Open Insider Buy/Sell Ratio at 44.2.

The S&P 500 has seen a decline in forward earnings estimates to $171.60 per share via Bloomberg as the index has risen, resulting in it now being fairly valued. The S&P is trading at a forward P/E multiple of 18.3x, while the "rule of twenty" finds fair value is also at 18.3x. The prior attractive undervaluation has been resolved.

While the index charts are sending largely positive forecasts, investor psychology is showing an increase in complacency now that the indices have had a nice run, pushing them into fairly valued territory. Meanwhile, the VIX strongly suggests the potential for a market correction. As a result, we remain "neutral/negative" in our near-term outlook.