Note: Wednesday is Yom Kippur, a holiday I observe. My next column will be Friday morning, October 7. If you observe, have an easy fast.

Over the weekend the chatter going around from market folks was all scary, Lehman-type stuff. I get it.

You see I believe we all have some version of recency bias. I lived through the Crash of 1987. For years thereafter folks were looking for another Crash everywhere.

I recall in early October 1989, almost exactly two years after the '87 Crash, leveraged buyouts (LBOs) were the hot activity on Wall Street. On a Friday afternoon with an hour of trading to go, United Airlines came out and said they could not get the financing for their deal and the market tanked. The only thing that saved it was the closing bell.

We didn't have cell phones or even the internet back then so the weekend was filled with anxiety. Folks came to work on the Goldman Sachs (GS) trading desk wearing literal crash helmets. We were all told on Friday night to be at the desk by 6:30 a.m. the latest. Everyone was prepared for another 1987 Crash.

What did the market do? It rallied.

When we are all so prepared for an event because another one somewhat similar is so fresh in our minds the outcome is rarely the same. Does anyone really think the Fed would not have come in to calm the market in some manner if we had a "Lehman Moment"? Even if you are a Fed hater (and there are many out there) you know deep in your heart, there would have been soothing words uttered.

Now that we've had our early October rally, the question that fills my inbox is if we're heading back down and when. Let me report I wish I was that smart! I can only go with what my indicators tell me and they say we are not yet overbought, not on a short or intermediate-term basis.

The breadth of the market was in line with the rally. It was good enough to get the McClellan Summation Index, below, to turn up. You might need to squint a bit to see it, but there it is. And it has happened on Day Two of the rally, not four or five days in. The earlier it turns the more likely the rally is to stick for more than a few days.

The Nasdaq saw the number of stocks making new highs increase a bit more; they now number 68, which is the same number of new highs we saw when the Nasdaq was 1500 points higher than it closed on Tuesday. 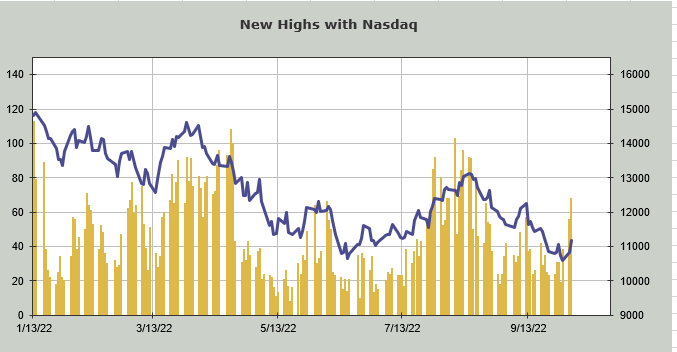 Sentiment-wise we saw some folks warm up but I would not say many. As I said a week ago, I expect we will eventually see the bears mosey over to the bulls' fence.

If you want to fret, then fret that the bonds were stalled out, not able to get going. Perhaps they are waiting for the Jobs Report at the end of the week, but that continues to be something to focus on.

There is also some resistance the major indexes are coming into. You can see it clearly on the chart of iShares Russell 2000 ETF  (IWM) . But if bonds don't die again I am inclined to think a pullback would lead to another rally for stocks.

Get an email alert each time I write an article for Real Money. Click the "+Follow" next to my byline to this article.
TAGS: Bonds | Federal Reserve | Indexes | Investing | Markets | Stocks | Technical Analysis | Trading | Treasury Bonds | U.S. Equity