No tool, so ancient. No weapon, so primal. Few activities provide for the inner soul with the sublime satisfaction that the sharpening of a blade might. Medieval. With a stone. Both sides. Over and over and over again. Until that blade will cut through anything... and I mean anything. Some may consider the act a futile waste of time, simply a chore. Just buy a new blade? Others know. Positive energy. Restored.

Cold steel? The concept, though, is far deeper. In order to excel, one must hone one's efforts, repetitively. Prayer. Meditation. Shutting one's pie-hole long enough to absorb another's thoughts. The method is individual. The results, the same. A sharper understanding. A broader state of readiness.

It's so good, I wish I could claim it as my own. Vito Racanelli's column in this weekend's Barron's nailed it, but good. In possibly the most accurate description of recently bazaar market behavior, Racanelli refers to what we have experienced as the "zombie market," a marketplace where no attempt is made to understand, nor interpret, information. A market where the algorithms and bots are driven to feed off of any information, significant or not, and then the rest follow in aggregate in whatever direction.

Nice job, Vito. I have tried to explain the constant overshoot caused by headline reading/keyword seeking algorithms for quite a while. I think your description is just perfect.

Another year begins. Everyone one of us that, to our personal amusement, find ourselves on the right side of the dirt for one more beautiful morning... has something to be grateful for. Something wonderful. Even those who might, on a personal level, be trading at or near the bottom. It is you who are closest to a personal renaissance.

How do I know this? That's easy. For if one has taken a beating, is living in a bad place, mentally or spiritually, but still fights on, then we know that this is one who does not quit. You are reading stuff like this on New Year's Eve day. You are made of metal. We already know that cold steel can be sharpened. We already know what a newly exposed edge is capable of.

To be clear, stock market volatility is here to stay. We can honestly opine on market structure, but day to day, we deal with what we are capable of impacting in a positive way. This is a negative. An unpredictable obstacle to success. We adapt. We narrow our scope. We learn, if we have not done so before, to hedge, to play small ball.

Growth will be tougher to come by, we know this. Economic growth? Earnings growth? Yes. Time to get back to basics. As the day-to-day issues of high-speed perversion in price discovery at the point of sale are worked out, the fundamentals of the balance sheet will gain in importance. Do not be afraid to put the work in. Understand what is key here, what is healthy, what is not. Cold steel. Everyone of you can do this.

The most important medium-to-long-term impacts on investment decision making remain from 2018 into 2019. Monetary policy, first and foremost. The trajectory of expectations for the Fed Funds rate is important. But markets will continue to be at least somewhat illiquid until it is broadly understood that much of the condition has been created by the speed of the Fed's balance sheet draw-down program, know as "quantitative tightening." Does it not make sense that if asset valuations were artificially impacted in a positive way as this balance sheet was expanded, then the withdrawal of money supply at speeds far exceeding that expansion would incur dramatic impact? Duh.

Remember that when "they" try to explain to you that this "created" money supply that was not released into the real economy, they exaggerate just how benign that expansion was. Think. When the U.S. Treasury borrows money to fund the business of government, and the central bank creates the money out of thin air to be lent. Just what happens to that dough after auction? Salaries, contracts, etc. In other words, real economy impact. Again, duh.

Just as important to market conditions will be the amicable resolution, or at least the appearance of an amicable resolution, to the ongoing trade dispute between the U.S. and China. The president tweeted optimistically on movement toward a "comprehensive" deal on Saturday. That is one reason why equity index futures are trading in the green early Monday morning.

In case one does not study Chinese macroeconomic data all that closely, that nation's official manufacturing PMI for December printed in a state of contraction. Does that put more pressure on the Chinese delegation at the (low level) meeting set to take place next week? The markets would like to think so. I expect nothing. Therefore, I am surprised by nothing.

I would like to think that the positive movement witnessed across U.S. equity markets to have been caused by the sizable pension fund re-balance that all of us have been looking for. That would at least offer a neat and tidy explanation. Unfortunately, we have not seen money move out of the bond market just yet in any way that would confirm this for me. If this expectation is to be realized to broad expectations, a lot has been left for today. With many foreign markets closed for the holiday, this could get really sloppy really fast.

Do not worry about thin markets here in the U.S. No U.S. trader worth his or her salt takes off on New Year's Eve. Just does not happen. Hear that explanation used in a way to justify volatility today, you know that individual is winging it, and probably knows less than you do.

Yes, one of my core longs through all of the recent market misery has been Walt Disney (DIS) . Obviously, the business of entertainment is all abuzz regarding the release of just about every Disney movie, as well as every improvement made at Disney theme parks around the world. The focus, at least for the short-to-medium-term, remains on the transition of cable television to a model that accommodates both traditional cable viewers as well as cord cutters.

Many of you know that one of my favorite short ideas for 2019 is Neflix (NFLX) . The fact is that I did indeed cover that short last week, but that was simple profit taking. The trade had exceeded its target price -- and well, you know how I am about market discipline. The fact is that for many firms engaged in the business of streaming television, costs are only going higher, perhaps much higher as the field becomes ever more competitive. After first dealing with Hulu -- primarily a Disney offering going forward -- and Amazon (AMZN) Prime, the field has grown. Or will soon enough to include Alphabet (GOOGL) , AT&T (T)  and Walmart (WMT) , not to mention others. The biggest dog in this fight will likely be the king of content, itself, Walt Disney (DIS) . 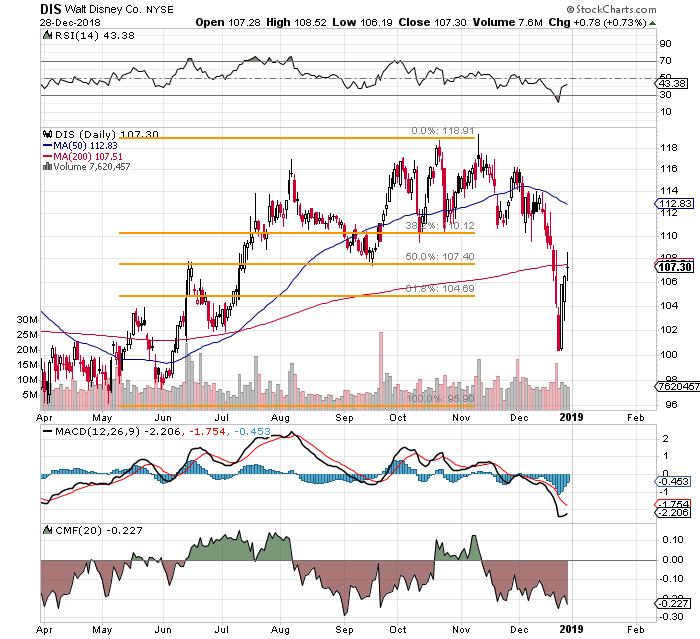 I'll tell you what. I love the ESPN plus service. So much to see there. It has all of the ESPN offerings across the various networks, in addition to many sports not readily available otherwise. I watched Army play Brown in ice hockey Sunday night. Beat that. I know that I will be an early sign up for the new Disney service when it becomes reality. Still love the mouse.

What I see here is a name that until recently had held up rather well. Then, in line with broader markets, took a serious December beating, only to find some solace last week. Money Flow remains glaringly awful. The daily Moving Average Convergence Divergence, though potentially turning, still places all three EMAs (12, 26, 9) below the Mendoza line.

Help did arrive last week above par ($100). There had been some resistance to that spot back in the Spring, which created some algorithmic recognition there. There remains the danger, after the pension rebalance and any lingering January effect are out the way, that the name could experience more selling. Hard support seems to live down around $96. The stock has been repelled at, or close to $118 three times now. DIS will report the firm's first-quarter earnings results after the closing bell on Tuesday, February 5. Looking to add, or initiate, here is an idea.

1) The sale of these options in aggregate drops the net basis of the initial purchase to $103.60.

4) In the event of a worst case scenario, the trader would then sell three out of the money calls (likely targeted around Q2 earnings results in May), against the position in order to further reduce basis.

Get an email alert each time I write an article for Real Money. Click the "+Follow" next to my byline to this article.
TAGS: Economic Data | Economy | Investing | Put Call | Stocks | Market Recon | Global Equity