So, while the charts remain bullish and have yet to generate any sell signals, indicators imply a weakening of the market's "shock absorbers" to a point where near-term risk may be outweighing reward. Thus, we are shifting our near-term outlook. 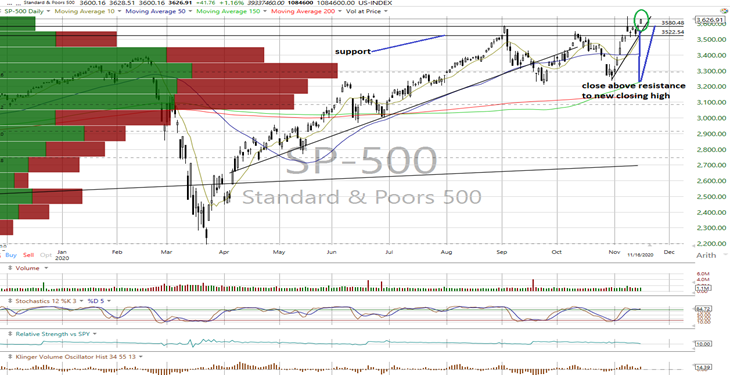 All the equity indices closed higher Monday with positive internals on the NYSE and Nasdaq as trading volume rose from the previous session.

All closed near their intraday highs with the S&P 500 ( see above), DJIA, Dow Jones Transports, S&P MidCap 400, Russell 2000 and Value Line Arithmetic Index posting new all-time closing highs. All remain in short term uptrends and above their 50-day moving averages.

No sell signals have been generated although the bulk of the stochastic readings are overbought.

Market breadth remains positive with the cumulative advance/decline lines for the All Exchange, NYSE and Nasdaq positive and above their 50 DMAs.

The data, however, has increased its cautionary message to a point that suggest near-term market risk has become elevated.

The one-day McClellan Overbought/Oversold Oscillators moved deeper into overbought territory with the NYSE's being very overbought (All Exchange: +87.13 NYSE: +100.94 Nasdaq: +76.67).

The Open Insider Buy/Sell Ratio dropped to neutral at 26.1 but has not broken its recent downtrend as insiders had been increasing their selling activity as the rally progressed.

Also, this week's Investors Intelligence Bear/Bull Ratio (contrary indicator) saw a decline in bearish advisors as bullish sentiment increased and remains bearish at 19.4/59.2. The same dynamic was registered on the AAII Bear/Bull Ratio at 28.69/43.02. 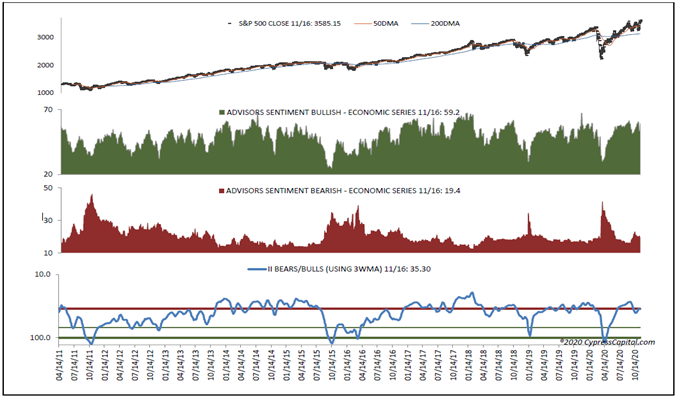 The valuation gap appears quite extended with the S&P 500 trading at a P/E multiple of 22.9x consensus forward 12-month earnings estimates from Bloomberg of $158.19 per share, while the "rule of 20" finds fair value at 19.1x.

While the charts remain positive, the market's overbought conditions combined with sentiment and valuation levels suggest to us that near-term risk has become elevated to a point worthy of shifting our near-term outlook to "neutral" from "neutral/positive."