Yes, I am that simple!

So, naturally, we've had a sideways market for nearly three weeks now. We got moderately oversold (short term) and we have barely rallied off that oversold condition. I grant you the oversold condition wasn't great but look at the Oscillator now, as it peeks up and over the zero-line, while the indexes have gone nowhere.

The bears will say that a market that works off the oversold reading by going sideways is bearish. I would not argue that point, because that is generally the case. And it's not as though the intermediate-term oscillator helps us any, since that is not oversold, either. It has come well off that overbought reading we saw in late November. It hovers near the zero-line, and the math says it ought to come down more before it gets oversold.

Yet, when I look at the number of stocks making new lows on Nasdaq, I find a continued contraction. Last January (A) saw nearly 900 new lows on a 10-day moving average. May chimed in at just over 1,000 (B) while September and October couldn't even make it to 800 new lows (C ). Now look at the recent visit to the lows: It brought us to point D with a smidgen over 400 new lows. There are a lot of stocks that are tired of going down. It doesn't mean they want to go up, but they are sold out. 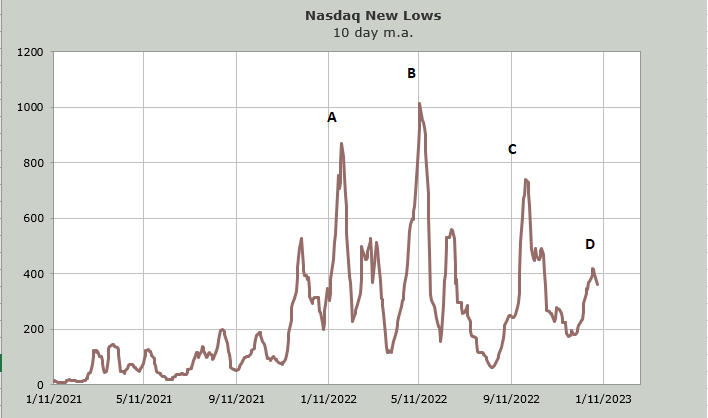 Even the McClellan Summation Index has stopped going down. It hasn't turned up, but nearly three weeks of sideways in the market has gotten it to stop going down.

Finally there is the Daily Sentiment Indicator (DSI). Nasdaq's is at 12. The S&P is at 15. Last Wednesday, just before the big up day on Thursday, Nasdaq's DSI got to 11.

So, consider that new lows are no longer expanding, the Summation Index is trying to hold and sentiment is getting pretty bearish. But we are not oversold, not short nor intermediate-term. If we rally from here, I think we run out of gas pretty quickly, just because of the lack of "oversoldness." But if we tumble, say late this week, or next week, then we might get back to an oversold condition by mid-month and we already know that the DSI would likely be single digits if that happened.

At least that would set us up for another trading rally instead of this sideways chop we've been in for nearly three weeks.