Let's begin with the reversal. It arrived right after the Invesco QQQ  (QQQ) managed to fill that gap from early March, so in that respect the chart worked just fine. What is different in this week's sell-off vs. last week's sell-off is the volume. Last week we saw volume rise decently into the decline, where as this week, we haven't seen it yet. Last week it gave us a set up for a rally. 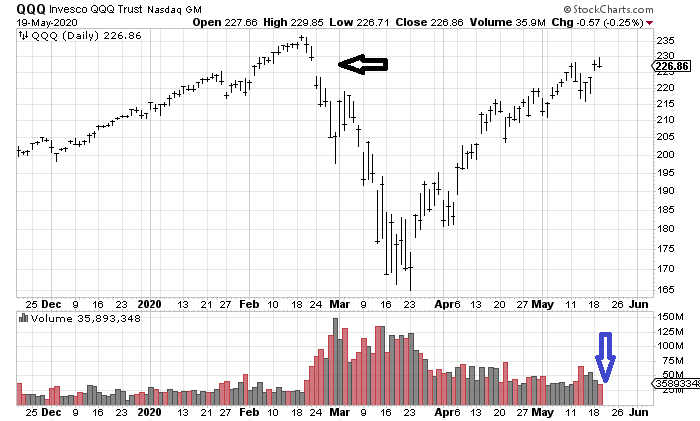 The other indicator that gave us a set up for the recent three-day rally was the high put/call ratio for that decline. That, too, is different this week. Monday's total put/call ratio was 72%. So was Tuesday's. That means the 10-day moving average is veering into complacency land.

There was something else that was different. The breadth of the market for the day was relatively calm for a day the S&P lost 30 points. It hasn't changed the lower highs in the cumulative advance/decline line that we looked at Monday, nor has it changed the McClellan Summation Index, but it is worth pointing out that it wasn't weak breadth that preceded the decline on Tuesday.

I think these are all reasons why we should continue to see volatility the roller coaster ride isn't going away.

One final note on silver, since it has been so hot in recent days. Using SLV (SLV) , the ETF to trade it, silver got to resistance on Tuesday and the Daily Sentiment Index (DSI) got to 91. I would not be surprised to see a pullback later this week.

(DIS is a holding in Jim Cramer's Action Alerts PLUS member club. Want to be alerted before Jim Cramer buys or sells this stock? Learn more now.)

Get an email alert each time I write an article for Real Money. Click the "+Follow" next to my byline to this article.
TAGS: Entertainment | Investing | Stocks | Technical Analysis | VIX |