And a smile can hide all the pain

And I dream of the things I'll do

With a subway token and a dollar tucked inside my shoe

For some time now, based on the evolution of the U.S. economy in the face of such obstacles as a trade war, a global slowdown in growth, and higher dollar valuations caused by what was at the time inappropriate monetary policy, the consumer, supported by an underlying demand for labor, has been the strength of domestic outperformance.

Just how strong is that U.S. consumer? We know from the Bureau of Labor Statistics that Average Joe and Jane saw no hourly raise in September. At least hours worked remained stable. We know from that same BLS that consumer prices stalled completely in September. We also know from the Census Bureau that after an even better August than first reported, Jane and John Doe spent less in September, despite the break that they were handed in pricing.

We saw weakness in September consumer demand for motor vehicles and parts, for building materials, for gasoline and of course... for whatever it is that department stores still sell. Even non-store retailers (That's e-commerce) saw a contraction in sales for September from August. Don't worry. Non-store retail sales are still up 12.9% year over year, but September was a hiccup.

Where is the consumer still strong? I mean if this one negative month at the retail level that happened to coincide with stalled inflation and wages is the start of a trend and not a statistical aberration? Housing has been strong. Across the board, at every level.

Thursday, the Census Bureau will release September data for housing starts. the first significant look at the housing market for the month. Forty-five minutes later, the Federal Reserve will lay down some digits concerning Industrial Production and Capacity Utilization. All of these differing metrics are expected to further paint September as a month of economic decline.

The probability for a rate cut on October 30, as priced in by Fed Funds futures markets in Chicago, increased from the mid 70%s to roughly 88% on Wednesday in response to the retail sales data. I would think that this is no sure thing, as the odds for a second rate cut beyond October are priced in... never. There is no cut after this cut priced into these markets. The Atlanta Fed's GDPNow model, which is more of a running snapshot than it is a prediction, now shows the third quarter at SAAR quarter-on-quarter growth of 1.8%. That will change later today. Both Housing Starts and Industrial Production contribute to the model. Sometimes updates to the GDPNow model pass with hardly a notice. Maybe not today.

The earth (my favorite planet) rotates once every 23 hours, 56 minutes and four seconds. Apparently, this rotation is slowing ever so slightly over time. Your ancestors may or may not have walked uphill both ways to school as kids, but they actually did put in a longer day. In our exciting world, rotations have catalysts. There is no timing, but there certainly is causation.

Just for instance, let's say that maybe Workday (WDAY) offers some wobbly prospects for growth at that firm's investor day, and in response RBC cuts their target price and Macquarie Research offers some less-than-flattering commentary. Let''s say that Adobe (ADBE) is downgraded at Citigroup (C) to "neutral" as that firm's "Digital Experience" business raises questions. Let's say that Morgan Stanley (MS) downgrades ServiceNow (NOW) based on margin pressure. Now, let's say all of that happens on the same day. Ladies and gentlemen, I give you a software/cloud industry-wide beat-down. I give you Wednesday.

Trading volume at New York's two largest equity exchanges printed sideways from Tuesday. That said, volume directly attributable to the market's two broadest large-cap equity indices showed an increase for the second day in a row off of Monday's federal holiday. Consumer Discretionary names led the way, followed by Utilities, with Materials, Communication Services and Staples rounding out the top half of the S&P 500's sector tables in terms of daily performance. The Information Technology sector finished near the bottom, suppressed by Semiconductors to some degree, but mostly by Software.

Indeed, for at least the one day, money fled high-growth, high-multiple stocks and chased a mix of both defense and value. For the record, Adobe, many readers know, has been a Sarge name. This is the only name in that group that I had not either exited or reduced exposure to in recent months. My target price for that name stands at $265. Any basing for that name, today above that spot, and I likely add.

As I finish up my morning market note, equity index futures have moved higher as headlines flash that negotiators representing the United Kingdom and the European Union have agreed upon the outline of a Brexit deal. Investors should maybe hold their enthusiasm, as at this time, I have not seen any news that might indicate that Northern Ireland's DUP party has embraced a change in posture.

Time to go back to the well? Your pal was probably the only kid in his spin class last night shorting Netflix (NFLX) during short periods of recovery. We'll see how that plays out.

The Fed commenced on Tuesday of this week with a rather aggressive (not QE) plan to expand its balance sheet at the pace of $60billion per month. This plan wisely targets T-Bills and T-Bills only. The Financial Times ran a piece on Wednesday asking how the central bank will be able to do this "without pushing down" short-term yields, as certain money market managers might not be so willing to sell their Treasury Bills then sell them to the Fed.

Well, no kidding. That ,in my opinion, is at least half of the reason for this expansion. The Fed is right to say that this action is not stimulative in intent. There can be no doubt that the balance sheet had contracted too far in the face of tighter overnight cash markets. Just as important, and there is no way this is lost on those at the nation's central bank, is forced pressure on the short end of the Treasury yield curve. That 3-month / 10-year spread was holding through the wee hours of Thursday morning at almost 14 basis points. Not only did this spread go positive last Friday, this spread has held and shows clear signs of expansion.

Is the curve still too flat? Yes it is, for my liking, but as long as this particular spread remains positive, and as long as, despite inconsistent headlines, there remains a possibility of a delay in the implementation of the administration's December 15 deadline for new tariffs that would be focused upon consumer goods manufactured in China, the environment prevents me from running my own book as defensively as it had been prior to last week. This is not "game on." This is my simple interpretation of the world that I must live in and attempt to excel in.

The bad news? Simple. Gains made in merchandise revenue were more than offset by contraction in both the coal and intermodal businesses. The clear bright spot was in the firm's tremendous execution in controlling expenses. Expenses declined by 8%, driven by volume-related savings. This drove the firm's operating ratio to a best ever (record low) 56.8%.

For those that have never traded the rails, an expense ratio is very simple to understand. Just operating expenses as a percentage of revenue. See, nothing to figure out. This is just the inverse of operating margin, a more commonly used metric used across most other industries. 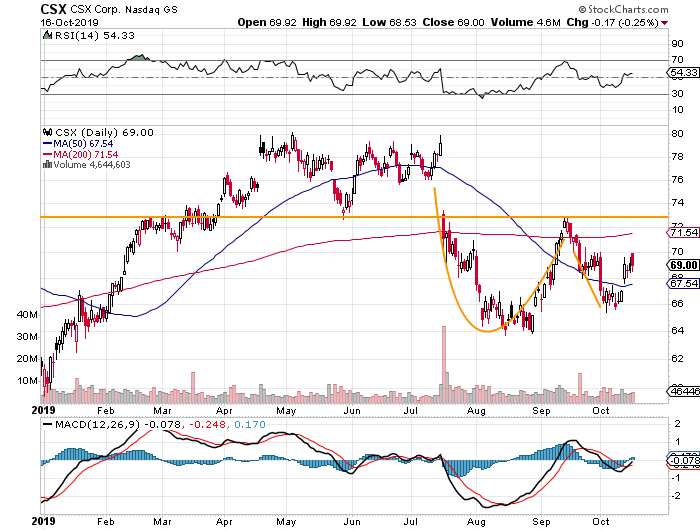 These shares are trading higher overnight. While one will quickly see recently rising Relative Strength, one will also see the bullish crossover seen in this stock's dailyMoving Average Convergence Divergence that occurred just ahead of that earnings release.

What now? There are two immediate targets. The 200-day simple moving average stands at $71.54. Should the overnight action hold, and these share open above that spot, this could cause an algorithmic reaction that allows a test of the pivot (off of the cup with handle) at $72.85. The what? See that gap in July. That gap has never been filled. My target price stands at $80, the top of the 2019 chart. The June/July triple bottom of $76 is very realistic.

Get an email alert each time I write an article for Real Money. Click the "+Follow" next to my byline to this article.
TAGS: Economic Data | Economy | Federal Reserve | Investing | Markets | Politics | Stocks | Technical Analysis | Trading | U.S. Equity