Had to smile? Not really. Did anyway. Smile, that is. The well-known man on the television was speaking about the rotation underway up and down our believed Wall Street. We had even referred to what has been, or is going on, as at least an attempt at a rotation, or maybe even "THE" rotation out of "over-valued" mega-cap tech and into "under-appreciated" value. Just one thing stuck out like a sore thumb, though.

When you rebalance a portfolio, or rotate inventory, don't you buy something else with the newly created proceeds? Hmm. I mean sure... "they" did seek some safety in U.S. Treasury securities of middle to longer maturities in two of the three days of this market rout. They really did not buy gold, or crypto-currencies. The suddenly stronger U.S. dollar made sure of that. The VIX is elevated, as are put/call ratios relative to single stocks, but not to levels that would imply terror. No, I think it is safe to say that while the past three sessions in aggregate are indeed awful to look at, there is still no panic.

What caused this beatdown? Was it the 'Nasdaq Whale', or at least that kind of behavior described across the financial media? That certainly may be a significant part of this, though we know the reasons are aplenty.

Did you really blame the college kids on Robinhood, or the unemployed guy or gal hopping onto their retail trading accounts for that rally that roared for nearly half a year? Now, you're smiling too. I knew I'd get you. You know it. I know it.

There are underlying reasons for everything, and there are in this case as well. The reason for operational overshoot in both directions is the lack of thoughtful decision making by actual human beings in real time. Ranger-qualified U.S. Army personnel have a motto: "Rangers lead the way." The markets have leaders too. They are known as high-speed algorithms. Their purpose is to execute trades measured in microseconds (because milliseconds are like eons in this world), while racing and shooting against each other.

These electronic traders are here for the same reason we are. To make money. They have a weapon that we do not. Action and reaction at speeds well beyond cognitive ability. At least natural cognitive ability. Think the price discovery that you witness makes no sense? Maybe, and this is my opinion, that's because it doesn't. Demand and supply at any given "moment" in time are the result of an almost invisible chase. The speed created is known as "quote blur." Enjoy.

Tuesday kind of stunk if you came in long and added to some of your most recently beaten-down positions (hand raised). About our non-rotation-- all eleven sectors shaded into the red.

The Information Technology sector took the most severe beating, with hardware, software, and the semiconductors all getting hit with the famous "ugly stick", and then hit again. Energy? There is just nothing positive to say there. Internet stocks weighed upon the Communications Services sector.

If this were a rotation, there would be some positive movement into the "Cyclicals." Sure, the airlines were higher, which is why the Transports, though lower, outperformed broader markets. Consumer Discretionary names struggled, and the banks were once again slapped around. If there was a renewed belief in economic recovery, these groups would be hot. They are not.

Is there anything nice to say? Sure. Trading volume was lower at the Nasdaq Market Site on Tuesday than it was on Friday. Breadth was overwhelmingly awful at both of New York's primary exchanges. There were even more new lows at the Nasdaq on Tuesday than new highs. I hope you understand how hard that is to do six months into a monster bull market.

By the way, though I still consider this market uptrend to be intact, we are at the point where the trend becomes suspect. We must see equity markets, the Nasdaq Composite and Nasdaq 100 in particular, fight back this week to keep on believing in this market. 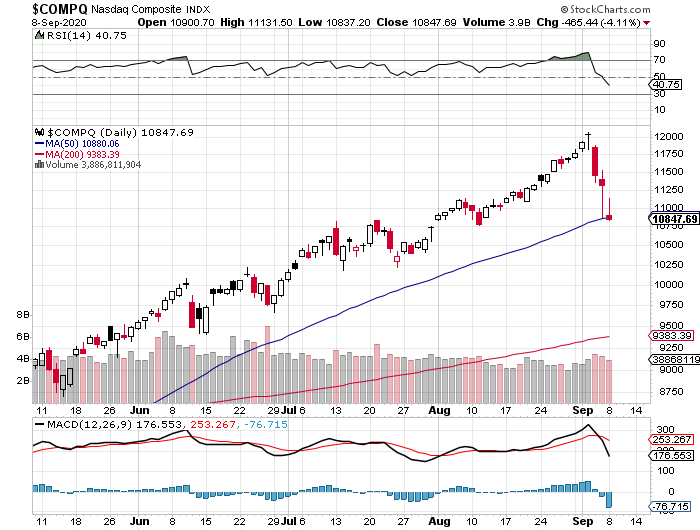 How important is that 50-day simple moving average (SMA)? Is that line pierced? Or is it broken? To the untrained eye, there may not be much of a difference, but technically, the difference is immense. The Nasdaq Composite rallies on Wednesday, and the tale will tell that this line held under pressure. That line truly breaks? Then the number of managers taking what profits they still have will increase in magnitudes. That's a different tale, but one that could also possibly be told. September is supposed to be dangerous. So is October. Keep your helmets on. Buckle your chin straps. The road ahead is unpaved.

Put it this way. Most traders, investors, and economists believe that at least from a macro perspective, the worst is behind us. Might it also be true that the best is behind us? Remember our "reverse square root symbol" recovery? Call it a "Bungee Cord" economy if that seems "cooler" or easier to explain. Does not snap back quite as high as where the initial fall came from. The second half of recovery is apparently, and quite obviously going to be the tougher half.

Yes, traders blamed the "Nasdaq Whale", while others blamed stretched valuations. Still, there were those that saw headlines that exacerbated a stressed relationship between the U.S. and China as a market negative. I saw all of these reasons and others. I also saw the "Skinny Bill" now being introduced by Senate Republicans that has already been deemed a non-starter by House Democrats.

This bill, which does include some aid for the unemployed, some school funding, and liability protection for businesses, really only amounts to about $300 billion in additional funding after being added to roughly $350 billion in funds left unused from prior relief packages. Also included would be another round of the successful Paycheck Protection Program. The House bill amounted to something like $3.4 trillion in new spending.

I don't think anyone expected the two sides to agree on anything sizable any time soon, but this bill truly underlines the gap between the two sides and drives home for Wall Street the fact that it must now must be considered more likely that both sides will be more content to cast blame going into the election than to negotiate with an aim toward accomplishing something realistic. This is why the U.S. dollar has at least for the short-term been revalued at a somewhat higher level versus its peers.

Tesla (TSLA) was indeed left out of inclusion in the S&P 500, at least for the immediate future. Chosen instead were Etsy (ETSY) , Teradyne (TER) , and Catalent (CTLT) , which would be added upon the quarterly rebalancing. While Tesla is easily more valuable, measured by market capitalization, than these three firms combined, the quality of Tesla's recent earnings was called into question, Remember, Tesla did make more than $1 billion from regulatory credits over the past four quarters. Something to look forward to? Truth is that Tesla announced that the company had gone ahead and completed the $5 billion sale of new stock that made headlines last week. Both this dilution and the already "priced in" inclusion in the S&P 500 were immediately "priced out." Tesla shares had the worst day in their history, and are now -34% for September.

Apple (AAPL) was stung by a report on Tuesday in the Nikkei Asian Review that the firm could miss production targets for its lineup of 5G-capable iPhones this year. The report states that production will likely start in mid-September (later than usual) and reach in between 73 million and 74 million units produced this year. The firm had apparently ordered 80 million new iPhones. On the bright side, Bloomberg News reported that Apple will hold a product launch event around the Apple Watch 6 this September 15 (a week from yesterday). The new watch will feature a bevy of health-related features. The company will then hold a second product launch event once the new iPhones are ready.

Slack Technologies (WORK) beats expectations, but still disappoints. If you know what I mean. Slack beat on both the top and bottom lines, but did not best expectations for billings, and remember what I wrote Tuesday. Billings are more important than earnings or revenue. Slack also declined to provide, or re-instate guidance for future billings. For that reason, I will have to extricate myself from that setup that I wrote up for Real Money on Tuesday as carefully as possible, which could include buying back the $35 calls expiring this Friday if there is enough profit there once options open, and rolling into a tighter strike price.

This really did not impact trading on Tuesday, but I think it worthy of mention that AstraZeneca (AZN) paused clinical trials of the Covid-19 vaccine that the firm has co-developed with the Oxford University as a participant in the U.K. has come down with an unexplained illness. An independent committee will now review the safety data. This particular vaccine is also undergoing clinical trials in both Brazil and South Africa.

(Apple is a holding in Jim Cramer's Action Alerts PLUS member club. Want to be alerted before Jim Cramer buys or sells this stock? Learn more now.)

Get an email alert each time I write an article for Real Money. Click the "+Follow" next to my byline to this article.
TAGS: Currencies | Economy | Indexes | Investing | Markets | Politics | Put Call | Small Cap | Stocks | Trading | Coronavirus