The first time one ever lays eyes upon the individual that will become their "other half," knowing that they will grow old and raise a family together? Nope. Not quite as stunning as that. I will remember that moment forever, right down to the clothing she was wearing and what I did in order to get a chance to speak with her. That day was 37 years ago. Looks that kill.

The fact that Motley Crue has pushed out their massive stadium tour, with the likes of Def Leppard, Poison, and Joan Jett, originally set for the summer of 2020, until June and beyond of 2021? That news fails to stun. I mean, what did you expect? To pack the house with 60,000 fellow rockers amid the worst pandemic in a century? Razor sharp? Looks that kill.

The complexion of U.S. equity markets on Monday evening after the way they went out for the weekend? Bingo. Stunning? Yes, but why? We thought maybe stocks were reverting to mean. Yeah, but which mean?

We thought that perhaps a broadening of the post-March rally was healthy, that sideways for the "pandemic" stocks would be a victory as long as "value" gained some ground. Forget that all three major equity indices painted the tape different shades of green on Monday. Forget that at the headline, the S&P 500 looked "pretty good" while the Nasdaq Composite and its more refined cousin, the Nasdaq 100 simply ripped the cover off of the ball.

Pop the hood, and see what you can see. Stunning? To say the least. Ugly rally? Looks that kill. Looks that might kill a rally. Except that this is 2020. Anything goes in 2020. Murder Hornets. Let's get after it.

Have I told you about Mooshi? Mooshi is simply the greatest dog I (or anyone I know) has ever had. We adopted her four years ago. She had been at a "kill shelter," and was in need of a home. About two years old at the time, a mutt that looks to be more Jack Russell than anything else, wild with energy, but also well trained. Whomever lost her, had put some serious effort into this dog.

It probably means nothing to some readers, but I pray every morning. After I finish writing Market Recon, and before I start writing whatever seems pertinent for the day at hand. We go outside. I thank my Maker that yet again I woke up on this side of the dirt.

We (Mooshi and I) pray for everyone in our family, for the repose of the souls of all those lost to this pandemic, for the recovery of all those currently suffering from this crisis, and for all those suffering for any other reason or in any other way. We then recite a series of "set prayers" that any Irish Catholic kid raised in New York back in my day would know by heart. The thing is that Mooshi (I was told that she was lost in South Carolina) understands the solemnity of prayer, or at least she knows that I do. She gets that. She won't even chase a squirrel until I shut my trap.

The only negative about this dog is that once in a while (not persistently), she has bad breath. Well, the domestic marketplace had bad breadth on Monday.

The Nasdaq "roared" until one realizes that Amazon (AMZN) , Tesla (TSLA) , Microsoft (MSFT) and a host of software types carried the football over the goal line, and without much blocking up front. Winners beat losers up at Times Square by an odd looking 19 to 13. Advancing volume beat declining volume by just 2 to 1. Solid, but not "out of the park" solid. At 11 Wall Street, though, the S&P 500 did show progress, winners barely beat losers, while declining volume actually did beat advancing volume.

Aggregate trading volume, by the way, remained just as unimpressive as it had been all of last week. In addition to software, the semis were strong, certain discretionary types were strong and so were many internet names. Other than that. Monday was a flop. Materials, Industrials, and Energy types... in other words, the kinds of businesses reliant upon actual economic health, all pedaled backward.

Sarge, why are futures trading higher overnight? Europe, my friends.

The two-day meeting that turned into four and then five days, actually produced after first lowering expectations. Something corporate America figured out a long time ago.

Early on Tuesday morning, European Union leadership appears to have struck a deal amounting to 750 billion euros in loans and grants that will have the European Commission borrowing through capital markets in order to fund relief efforts aimed at providing for member nations most economically damaged by the global health crisis. This is in addition to the already known seven-year 1 trillion euro EU budget.

Almost all major European equity indices are trading between 1.5% and 2.5% higher on the news as the wee hours passed here in New York.

There is good news.

According to data released by the Mortgage Bankers Association on Monday, "only" 3.9 million homeowners, or 7.8%, of mortgages across the nation were in forbearance as of July 12.

Why is this "good" news?

The percentage of these troubled loans has been in constant decline for five months now, since the height of the economic shutdown. Well, that is good news. This improvement has been supported by the fact that of the more than 51 million Americans that have been laid off since this all started, "only" 17 million+ were still receiving jobless benefits as of last week's numbers. While roughly two out of three workers who have lost work have apparently already been either brought back or hired elsewhere, that leaves one out of those three still in a jam. That's still way, way too many.

This makes the $600 that the federal government is padding state-level jobless benefits with every week a very big deal. One of my sons was one of these folks. Laid off (only for three weeks) early in this pandemic, he took a 30% pay cut to go back to work. Being a man of honor, and a veteran, he never thought about not going back. He also does not have mouths to feed, and really likes his employer. Does an individual in that position charged with feeding and clothing a family even have the luxury of making the "honorable" choice? Certainly not the easiest decision to make, and certainly not one, we on the outside looking in, even have the right to judge.

On that note, we expect to hear from Senate Republicans at some point this week. President Trump, Secretary Mnuchin, Senator McConnell, and Representative Kevin McCarthy all met at the White House on Monday. This is an election year. We know that even though many employees have been called back that the pace of initial claims is too high and could start increasing again as regional economies lock down and large corporations make decisions on permanent headcounts.

It would not surprise this trader/investor to see the right move toward the left on this issue more than the left moves toward the right. Just a guess.

She's back. Actually she never left. Look for Trump nominee Judy Shelton to finally get past the Senate Banking Committee on Tuesday as Louisiana Senator John Kennedy solidified Republican support for her addition to the Federal Reserve Board of Governors. This does not mean that she is in. She'll still need to get past the full Senate, but I would think this is likely as long as the job gets done by November.

As for Shelton's historical support for a gold standard? I have absolutely no problem with a gold standard as long as money supply remains elastic. Oh, and that is very easily doable.

Now that we've brought up the gold standard, have you seen prices for silver? While I have always urged investors to hold a firm 5% of investable assets in physical gold and an adjustable 0% to 5% in paper gold (futures, ETFs) as a means to more easily move allocation between an aggregate 5% and 10%, I never really talk about silver. Well, silver is rocking in 2020 as both Motley Crue and Def Leppard have not been able to take the stage. 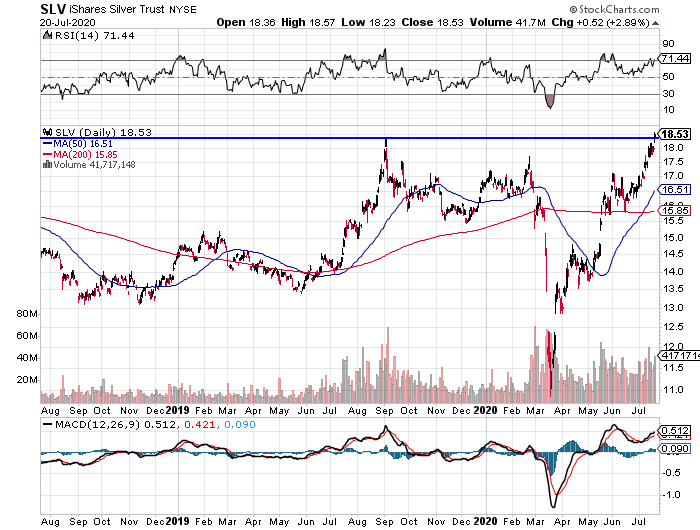 See what I see? I think should the iShares Silver Trust (SLV) find support this week at last summer's highs, then we are likely talking about exiting in between $22 and $23. Just a guy with an idea. By the way, I am flat SLV. I am really watching this closely.

(Amazon and Microsoft are holdings in Jim Cramer's Action Alerts PLUS member club. Want to be alerted before Jim Cramer buys or sells these stocks? Learn more now.)

Get an email alert each time I write an article for Real Money. Click the "+Follow" next to my byline to this article.
TAGS: ETFs | Federal Reserve | Futures | Investing | Jobs | Markets | Politics | Stocks | Trading | U.S. Equity