The indices closed mixed Thursday. The NYSE had positive internals while the Nasdaq had positive breadth but negative up/down volume.

Early session weakness was resolved during the day to the point that all closed at or near their intraday highs. No violations of support or trend were registered on the close although some were violated intraday. The close is what counts, in our opinion.

All the indices remain in near-term uptrends except the Russell 2000, which is neutral.

However, bearish stochastic signals were registered on the S&P 500, Nasdaq Composite and Nasdaq 100. They are not actionable at this stage, in our opinion, as violations of support have yet to occur. Nonetheless, they should be recognized.

The cumulative advance/decline lines remain positive on the All Exchange, NYSE and Nasdaq.

Psychology, however, has weakened a bit further. The Open Insider Buy/Sell Ratio is unchanged at 28.5 and just shy of a bearish signal as insiders have been selling into strength over the past several sessions.

In contrast, the Rydex Ratio (contrarian indicator) finds the leveraged ETF traders extending their leveraged long exposure to a bearish 1.37. Historically, insiders have been on the right side of the trade. 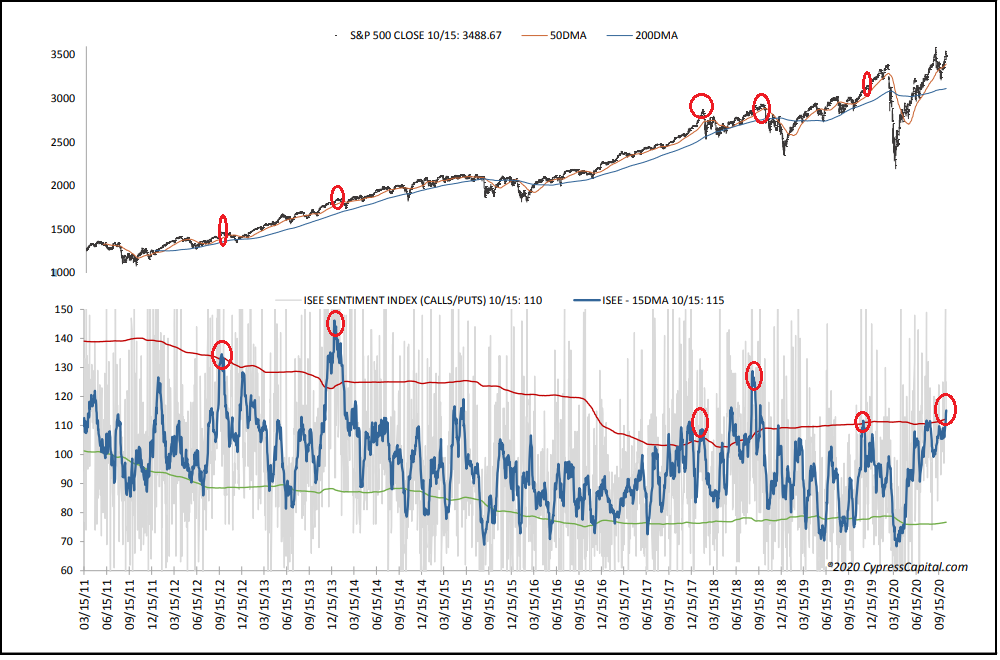 Also, the ISEE Put/Call Ratio (see above) is now at a level that has presaged market corrections five times since 2012. We do not typically give put/call ratios a great deal of consideration as they have not been prescient indicators. However, this one, in our view, is worthy of note.

The valuation gap remains extended with the S&P 500 trading at a P/E multiple of 22.3x consensus forward 12-month earnings estimates from Bloomberg of $155.93 per share while the "rule of 20" finds fair value at 19.3x.

We see the scales as fairly balanced between chart characteristics and psychology and valuation factors, causing us to maintain out near-term "neutral" outlook for the markets.

Get an email alert each time I write an article for Real Money. Click the "+Follow" next to my byline to this article.
TAGS: Indexes | Investing | Put Call | Stocks | Technical Analysis | U.S. Equity