Early market action is flat as market players hope that maybe the worst of the coronavirus crisis is in sight. While the number of cases is still rising, there is some slowing in progression and there is steady news flow about a wide range of efforts for increased testing, more protective equipment, greater social distancing and various treatments.

The inclination to do battle with this scourge is helping to provide market support, but the amount of uncertainty that remains is going to prevent a quick and easy recovery.

The bullish argument at this point is that the market is working hard to discount the worst possible outcome and when there is $6.2 trillion in fiscal and monetary support, it is going to keep some support under the market. Many market players are quite secure that now is the time to buy stocks for the long run as they are certain to be higher a year from now. The belief is that the coronavirus will be defeated and the economy will roar back very fast.

The bear case is that the optimism is misplaced. There is just too much unknown about both coronavirus and its economic impact. Over the weekend Dr. Anthony Fauci said that the US certainly would have millions of cases of COVID-19 and more than 100,000 deaths. There are currently around 143,000 cases in the U.S. and around 2600 deaths. If Dr. Fauci is correct, there is going to be a long steady rise in those numbers.

Many market players are convinced that Dr. Fauci's view is too negative. I ran a survey on Twitter (TWTR) . With over 1300 votes, around 35% of all voters felt that Dr. Fauci was wrong. That view is what is helping to put support under the market this morning.

What makes the current market particularly difficult to navigate is that we have never experienced an event quite like this. Nothing since the Great Depression has had such a widespread impact and created such uncertainty. However, never has there also been released such a torrent of government and scientific support.

Typically, bear markets don't end as abruptly as many hope. Here is a chart from Goldman Sachs (GS)   which shows six sizable bounces during the 2008-2009 bear market before the eventual bottomed occurred. 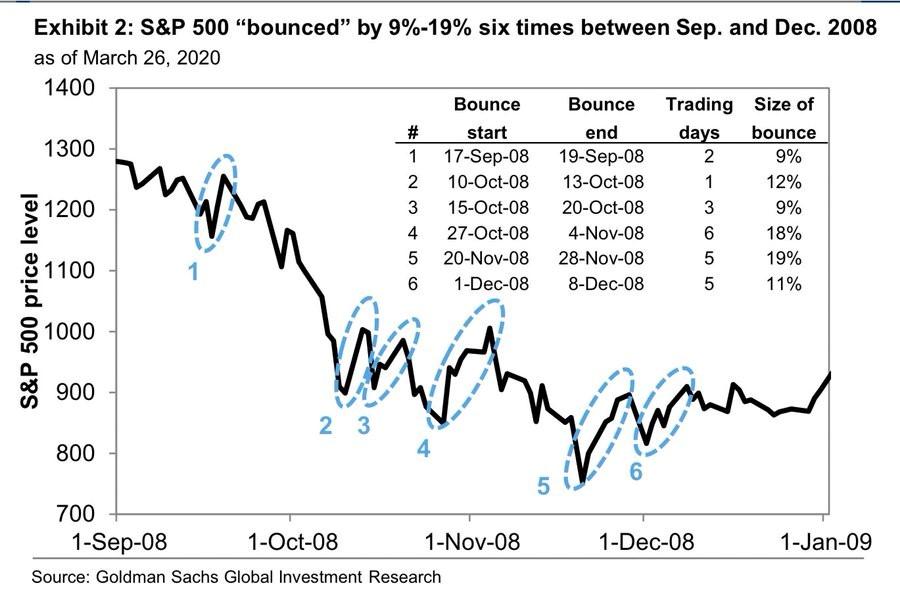 This is standard bear market action. Market players want to believe the worst is over and that they can move on. That is why there are so many powerful bounces before the eventual bottom occurs. Is it different this time because of the huge stimulus and the nature of a health crisis, rather than a financial crisis? Maybe, but we need to let the price action show the way. Countertrend bounces should not be easily trusted.

My game plan at this point is to focus primarily on short-term trading of the indices. I feel there is little reason to rush to build longer-term positions. Most market players are quite confident that stocks will be much higher a year or two from now. While that is likely correct, that doesn't mean that they are going to miss the best entry points if they don't rush to buy today.

Everyone is hoping that the worst of this crisis is in sight and that is putting a bid under the market, but the news flow is going to present some obstacles as we deal with a raft of unknowns.

Get an email alert each time I write an article for Real Money. Click the "+Follow" next to my byline to this article.
TAGS: Indexes | Investing | Markets | Stocks | Trading | U.S. Equity | Coronavirus