Monday's market appeared, from this vantage point, to be a market walking on eggshells, as if too frightened to disturb a sleeping giant. Either that or completely indifferent. Kind of hard to tell.

Aggregate trading volumes for equities were on the light side. NYSE-listed names traded lightly, in particular, which is where that volume shaded negative by a 4 to 3 margin. Names listed at the Nasdaq actually saw a very slight uptick from Friday's still-rather-thin trading, while the slant was decidedly more positive (more than 3-2) in skew.

There were two significant downdrifts in algorithmic momentum Monday. The first was a more sharply defined move that manifested just ahead of lunchtime in New York, while the second lasted through the final hour of the regular session, and felt something like a series of ebbing tidal waves that slowly eroded the walls of an abandoned sand castle left behind at the water's edge.

I have seen credit for the day's meandering weakness laid at the feet of Federal Reserve Board Governor Christopher Waller. In discussing the Fed's monthly asset purchase in a televised (CNBC) interview on Monday, Waller said, "I think you could be ready to do an announcement (on tapering) by September." Waller clarified... "That depends on what the next two jobs reports do. If they come in as strong as the last one, then I think you have made the progress you need. If they don't, then I think you are probably going to have to push things back a couple of months."

While this could perhaps be used off the cuff to explain the mild equity weakness experienced, based on a reaction to that opinion by keyword-seeking algorithms, it would do nothing to explain the surge of capital that transpired simultaneously into the longer end of the U.S. Treasury spectrum. The move was quite stark from the U.S. 3-Year Note all the way out to the U.S. 30-Year Bond, while the U.S. 10- Year Note peaked at a yield just above 1.15% prior to backing off a bit.

Monday's choppy price discovery process could more than likely be associated with the sloppy ISM Manufacturing Index reading for July that printed just 15 minutes ahead of the Census Bureau's June release for month-over-month Construction Spending. Both reports disappointed, Construction Spending significantly so, with a fourth weaker month in five for that series that had put together a considerably stronger streak over last winter. This is about waning economic growth. But why?

The ISM Manufacturing report does not read so bad. Sure, there was disappointment at the headline, but New Orders remained strong, as did backlogged orders. Prices are still increasing, but the pace of that acceleration thankfully appears to be slowing. Where the weakness really is, is in inventory building. We saw that in our first look at second-quarter GDP, and such weakness persisted in July. Inventories overall dropped into outright contraction, while customer inventories were not only deeply into contractionary territory, but the pace of this contraction has accelerated.

It's in the details, or should I say, the comments. The ISM publishes comments made by purchasing managers that nobody reads. Well, check these out:

"Purchases continue to have long lead times due to shortages of raw materials and labor force, as well as logistical challenges." .... Computer Products manager.

"Business levels continue to be very strong, but we also continue to struggle finding employees. We can only fill 75% of our order requirements due to the labor shortage." ... Metals manager.

"Strong sales continue, and inventories are low as the chip shortage is keeping production down - we have idled several of our assembly plants to reduce the strain on the chip supply base." ... Transportation equipment manager.

1) You can't sell widgets if you don't have widgets.

2) You can't make widgets if you can't stock the parts.

3) You can't make widgets if you can't find people who know how.

4) Imbalances between supply and demand are currently being exacerbated by multiple shortages. The implication would be that this catalyst for consumer-level inflation would indeed be transitory in nature. The unknown here would be the true depth of current demand as those in need have probably placed multiple orders across several suppliers for what could be multiples in aggregate of their actual needs. These orders may disappear once bottlenecks ease.

How About Some Creativity?

The U.S. Treasury Department now expects, debt ceiling aside, to borrow $673 billion over the three months comprising the third quarter of 2021. This is $148 billion less than the previously anticipated $821 billion. Fewer outlays than had been projected. Hmm. Treasury expects to borrow $703 billion for the fourth quarter, with a cash balance of $800 billion. The Treasury is expected to post more details regarding how it is going to finance the federal government this Wednesday.

Economists at J.P. Morgan predict that the Treasury (how they project anything with such large fiscal packages still up in the air, I don't know) will need to issue $1.46 trillion in net debt for FY 2022, down $860 billion from FY 2021. Now, call me crazy... but doesn't the Fed now have to taper asset purchases simply to avoid becoming an even greater force in these markets?

$80 billion worth of Treasury purchases a month would be 35.7% of $673 billion, but would have only been 29.2% of the previously projected $821 billion. Perhaps the FOMC could shift the asset-purchase program to a percentage-based focus from a focus based on dollar amounts, thus reducing the pace of increasing balance sheet exposure without actively reducing effective accommodation.

A way to get the ball rolling without rattling any cages? You're welcome, Jay.

That's what economic activity, for the service sector in particular, boils down to. As we watch what we had thought might be a renewal of "normal" behavior become ever smaller in the rear-view mirror, some firms are rethinking their plans to return to offices, others taking action for those in public-facing positions.

Citigroup (C) , already back, is requiring staff to mask up regardless of vaccination status. Last week, both Walmart (WMT) , and the Walt Disney Company (DIS) decided to mandate vaccination for certain groups of employees, while Disney will require customers to mask up when indoors.

Several more firms weighed in on Monday. Perhaps this weighed slightly on equities as well. Home Depot (HD) , Starbucks (SBUX) and McDonald's (MCD) made mask wearing a requirement for employees regardless of vaccination status, while Target (TGT) , along with Walmart and Home Depot, are asking shoppers to wear masks in certain areas where the infection rate is high.

Remember, Apple (AAPL) was probably first out of the gate in requiring both employees and customers to wear masks inside stores in various high risk areas.

On Monday, the Financial Times reported that the most recent supply contracts made between Pfizer (PFE) , Moderna (MRNA) and the European Union reflected price increases of roughly 25% and 10%, respectively. Last week, you'll recall that Pfizer, which developed its vaccine and shares profits with BioNTech (BNTX) , increased guidance for vaccine-related revenue. Moderna reports this Thursday, BioNTech this coming Monday. You may or may not have noticed that the U.S. Army awarded a $3.5 billion contract to Pfizer last night.

It has become quite obvious to this amatuer observer that across the spectrum of available vaccines, these two are best in class, and that not just a third, but possibly regularly scheduled booster shots will be required as the immunity continually waxes and wanes throughout more developed economies, while vaccinating those living in less developed economies could take multiple years.

Bottom line? We are going to have to learn to live with this threat for the long-term at a minimum, and potentially forever. Pfizer/BioNTech and Moderna are going to sell a lot of products. A lot. 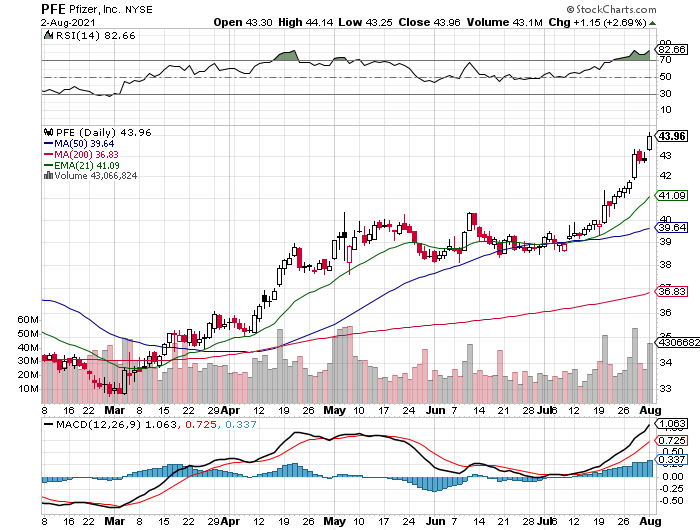 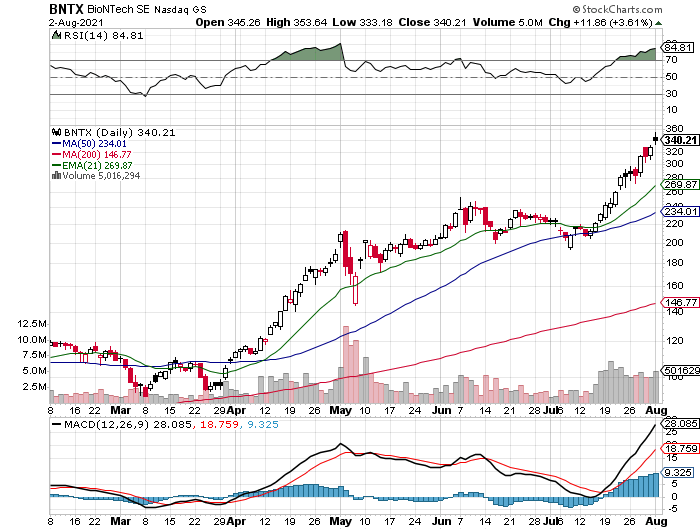 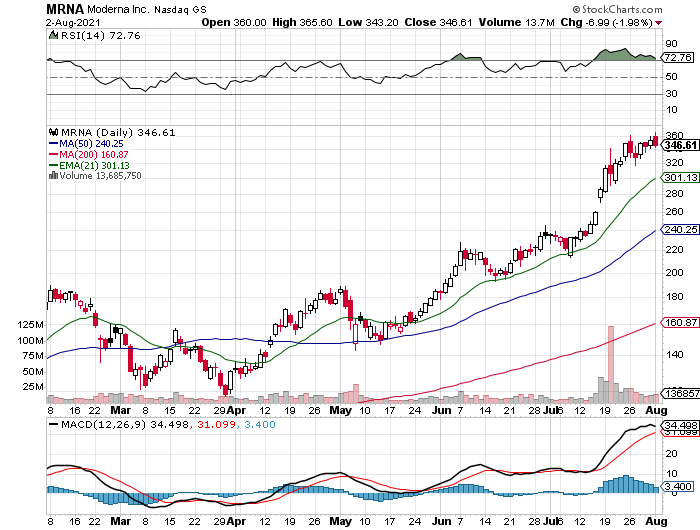 (DD, WMT and AAPL are holdings in Jim Cramer's Action Alerts PLUS member club. Want to be alerted before Jim Cramer buys or sells these stocks? Learn more now.)

Get an email alert each time I write an article for Real Money. Click the "+Follow" next to my byline to this article.
TAGS: Earnings | Federal Reserve | Futures | Indexes | Investing | Markets | Mortgage Backed Securities | Stocks | Trading | Treasury Bonds | U.S. Equity

If You Buy Now in This Bear-Bull Battle, You May Be Paying Later

You really want to snag a bargain -- and bank a win -- right now. Here's a better strategy.