Relentless. Isn't that the way the market feels to you? Relentless selling. On the way up it was relentless buying. I am old enough to remember 1973 but not old enough to have been participating in markets at that point. Yet, when I got into this business in 1982 there were plenty who had lived through the early 1970s, and they discussed it often.

I have often said we are all products of the market we 'grew up' in. Many who got into markets in the mid-1980s remember the Crash of 1987 and despite the precautions taken by the exchanges in the post Crash environment, that market action lurks in the back of their minds. If you came of age in the dot-com bust, you might look for bubbles everywhere. Or if the Great Financial Crisis is when you got into the market you might see that type of scenario, followed by a period of incredibly easy money. It's a matter of perspective.

But back in the early 1970s. I remember the stories of how relentless that 1973 decline was. So this weekend I decided to take a closer look, to see if there was any resemblance. We had a war in Vietnam, we had high oil prices and inflation so there were some similarities for sure.

Back then the Dow Jones Industrial Average was the dominant index, so take a look at a Richard Russell chart from 1973. The upper line is the DJIA; the lower one is the breadth (the advance/decline line). The market in 1972 was very narrow in scope, it was referred to as the Nifty Fifty Market. Folks had many names for this group of stocks, but the one that stands out to me is One Decision Stocks. You had one decision: when to buy them. They only went up. Their valuations were stretched but no one cared.

If that sounds familiar to 2021, that's because in 2021 we had a similar situation with that handful of index moving mega cap tech stocks, didn't we? A trillion dollar market cap became regular and no one even marveled at two or three trillion. Well, they marveled but it was only as a way to tell us how great that stock was. 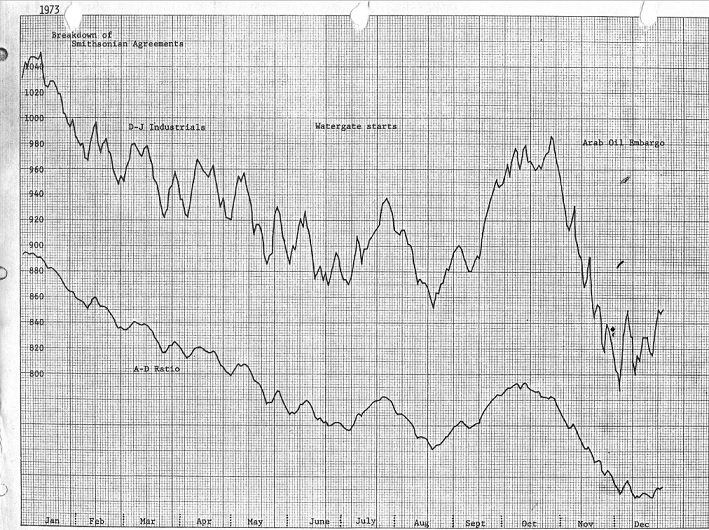 That bounce peaked in mid July, quickly falling to a new low by mid-August. Then we had a whopping 15% rally. A higher high even. It lasted two months. Then the rug pull came and by November we were at a lower low.

Now look at the current chart of the S&P 500 year to date. The peak in January gave way to a minor bounce late in the month before heading down again. But look at March: that rally lasted nearly three weeks and was around 10% before sliding again. In May, we rallied nearly 10% as well, lasting not quite two weeks.

In other words, this market, as awful as it has been, has been a party for the bulls compared to the 1973 decline. At least we've had tradeable rallies in the first six months of the year.

And I do expect another rally into the end of the quarter. Friday did not do much to change my view.
We're oversold, even if we are down on Tuesday, we'll still be oversold heading into the quarter-end.