You remember the "Energizer Bunny"? Nothing could stop that pink rabbit. Nothing. It was as if, and this was the purpose of the commercial, the batteries being advertised just never ran out of juice. Equities ran hot again on Tuesday. Ran higher, and for the most part, ran late. Roughly half of the S&P 500's upward move for the day on Tuesday came over just the last fifteen minutes.

Are those of us that have seen reason for caution just wrong? Are $3 trillion, and soon to be more in fiscal support and the central bank's plans to backstop everything under the sun, enough? Is the overt effort to control the yield curve through large purchases of federal debt enough? With the floated mention of targeting the entire curve? Money supply has clearly expanded. There is more cash still on the sidelines than in past years. So, yes there is more juice.

Clearly a case of capital chasing capital has developed. This has become a regular occurrence as the S&P 500 has moved higher in six of the past seven trading days, including three in a row. One might have thought deteriorating geopolitical and trade conditions between the U.S. and China might have put a dent in market performance. One might have thought the CBO's less-than-thrilling expectations for the slope of domestic economic recovery might have left a mark.

If that was not enough, others might have expected the political environment to knock financial markets for a loop, as social unrest became visible literally everywhere. Nope. Not yet, anyway. Did I mention the still-ongoing public health crisis? No? Yeah, that's still a threat to keep local economies shuttered, as well. Especially now that masses have grouped in the streets, some wearing masks and trying to distance themselves socially. Others apparently not concerned.

It appears, and this was well covered on Tuesday afternoon at Barron's, that even though Taiwan performed spectacularly throughout the pandemic, and even if South Korea did not fare as well at first, that nation responded incredibly well, both nations are struggling at least economically with the aftermath. Consumer activity across the retail, services, leisure and restaurant industries remains well below pre-pandemic levels.

What that means for us is this. Even excluding issues relevant to trade, the individual -- even in places where the pandemic was either never truly a public health crisis (Taiwan was never shut down) or quickly and effectively dealt with (South Korea) -- the individual remains timid in terms of either discretionary spending, public exposure, or both. Food for thought. Serious thought.

Normally we follow the flow of capital. We still do. I want you to think of these flows as a tree. The tree has two important roots that either keep the tree strong or allow the tree to be washed away in a storm. One root would be the combined impacts of both fiscal and monetary policies. This root is very powerful, as long as there is still faith in the system and faith in the currency.

The other root is traditionally less reliable and far more complex, if one can believe that. This other root relies on such fundamental forces as earnings growth that itself is supported by economic growth. Economic growth is supported by such "standard of living" inputs as "ease of commerce", velocity of money and sentiment. At the very bottom of the tree, the two roots reunite to form what we interpret as valuation.

At this point, markets are following from the apex of the tree all the way down to valuation, heavily reliant upon only that first root. The second root has been cast aside for now, as real time performance for the domestic economy and corporate solvency have been, and are now, mired in the atrocious. This means that to justify that still important leg, the economy must pull forward growth, and equity valuation must be forward looking. Perhaps very forward. The only problem with this is that the future has never been less certain.

But Sarge, I thought financial markets hated uncertainty. Good point. They always have. Now, however, economies reopen, even if social unrest slows the positive impact on local levels. This is bigger than the U.S. We see news that Germany, and even Italy, are planning to ease travel restrictions. We see a certain "cafe culture" returning to the streets of Paris. We see improved purchasing managers surveys in China.

Nearly all key global central banks are gearing up to provide more stimulus. Equities are strong. Everywhere. The U.S., with a suddenly weaker dollar relative to peer currencies, might just be experiencing a benefit led from abroad. Problem with that? Not really. Just a thought. When a tree becomes too dependent upon sunlight or irrigation that comes from only one direction, unexpectedly windy conditions can end in unexpected results. There is a caveat. The weaker root must strengthen ahead of the unknowable date of that blustery day.

On Tuesday, it was all about sectors or industries most reliant upon economic growth. Energy led the way, as might be somewhat expected given the news being circulated this week by OPEC and OPEC's allied producers. Even given that impact, Materials (led by aluminum and other nonferrous metals), Industrials (led by transports), and small-caps outperformed. Even looking into what appears at the surface to be just some "pedestrian" trading with broader market performance by the Technology sector, we see that semiconductors easily beat software for the day. Growth. No, I mean growth?

Trading volume improved on Tuesday from Monday, but did remain rather light. The increase in trading volume was far more evident at the New York Stock Exchange than at the Nasdaq Market Site, which does imply at least continued investment in the "old economy." Breadth once again appears to have been overwhelmingly positive.

Oil's back. Did you notice? Growth driven sectors of the equity market have been suddenly hot, but not alone. Industrial commodities have been hot too. While it is still very early on Wednesday morning, I see Brent Crude trading above $40 per barrel and WTI still trading around $37.50 after peaking above $38. What gives? Other than improved demand from some corners of the planet that had gone offline earlier this year?

As OPEC and some OPEC allies talk up production cuts, a tropical storm appears to set to work its way north through the refineries out in the Gulf of Mexico. The real storm however, might just be the possibility of U.S. shale producers coming back online should the underlying price of crude keep moving in this direction. The market is not ready for that. Just my opinion.

Zoom Video (ZM) did not have a great quarter. The firm had a GREAT quarter. Beats for both earnings and revenue were impressive to say the least. In fact, revenue increased by 169% year over year. There was 90% growth in the number of clients providing more than $100K in trailing 12-month revenue generation. As video conferencing became the lifeblood of the "work from home" economy, the number of customers with ten or more employees grew by a whopping 354%. 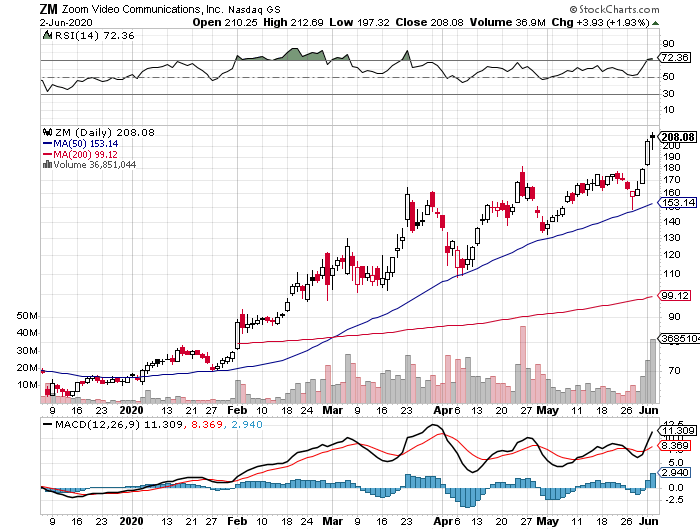 As clear as it is that these shares had become extended ahead of earnings, it also becomes clear that the enthusiasm was indeed justified. The firm guided higher going forward. Much, much higher. For the current quarter, Zoom Video is looking for revenue of $495 million to $500 million versus industry view of roughly $225 million. Q2 EPS is now looking up around $0.44 to $0.46 versus the Street's $0.11. Full-year guidance offered by the firm was equally robust versus the community of analysts.

I did not add to my short on Tuesday, nor did I cover any in the high $190s when I had the chance. I intend to give the profit takers a chance to get me flat later today, but I will not be giving them all that much of a chance. Twenty-seven analysts follow ZM. So far, I see at least three that have come out positively this morning. The rest will follow. I have no intention of getting caught in the algorithmic riptide that this may create. $195, or $205. Either way, I am on to the next thing.

Get an email alert each time I write an article for Real Money. Click the "+Follow" next to my byline to this article.
TAGS: Earnings | Economy | Federal Reserve | Indexes | Investing | Markets | Politics | Stocks | Trading | World | U.S. Equity | Global Equity | Coronavirus