Stocks at new lows. I have begun to harp about them, haven't I?

I began about a week ago and the complaining has gotten louder each day. I think I have even shown you the chart of new lows daily this week. Today will be no different.

Only today I have an eye-popping statistic for you. The number of stocks making new lows on Nasdaq was just over 400. That is the highest reading we've seen since the March 2020 collapse. Stop and think about that for a minute.

Nasdaq was trading half -- less than half -- of where it is today and we have to go all the way back to then to see a time when there were more than 400 new lows. That is not just explained by tax-loss selling. Or maybe it is. But if there are that many stocks to be sold for taxes, that doesn't say much about the market at new highs does it? 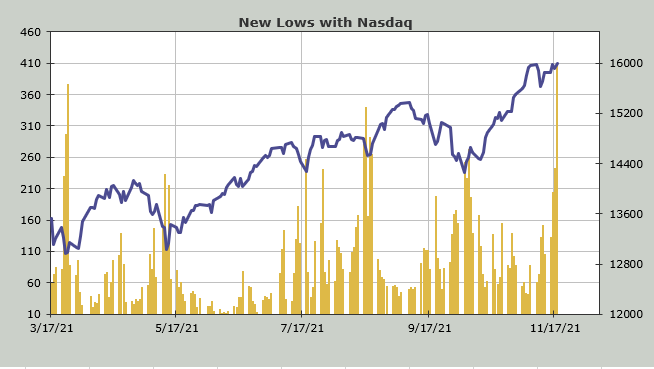 This week, and Thursday in particular, the New York Stock Exchange joined the expansion of new lows, topping 100 for the first time in months. 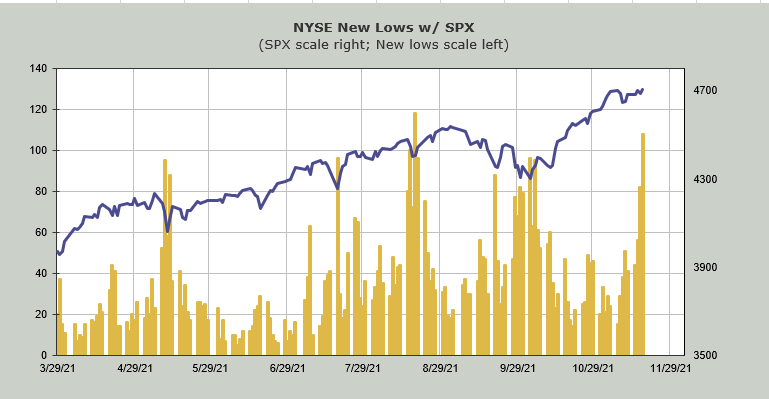 Breadth as we've discussed has been terrible. It only got worse on Thursday. Here is the updated chart where you can clearly see breadth back to early November levels while the S&P prints a new high. That is not bullish.

About the only good news is that breadth has been so weak -- and so persistent -- that it has turned the McClellan Summation Index south to where you no longer have to squint to see it. Wait, I said good news. Oh, that is that it has been so weak that when I calculate what it will take to halt the decline in the Summation Index I discover that it now requires a net differential of positive 2,600 (advancers minus decliners on the NYSE). Once this indicator gets over positive 2,000 it has stepped a toe into oversold territory.

What's really curious on Nasdaq is that for breadth I use up minus down volume, because I find it is a better tell of what is going on under the hood. Notice the September decline (Nasdaq is the brown line) breadth for Nasdaq (cumulative volume) stayed steady (blue line) and barely cared that the mega-cap names were taking the index lower. But now look at the green box and you can see the rally in Nasdaq while breadth has turned south. Why is this important?

Because it is difficult to find another time we have seen this divergence since the rally began in March 2020. 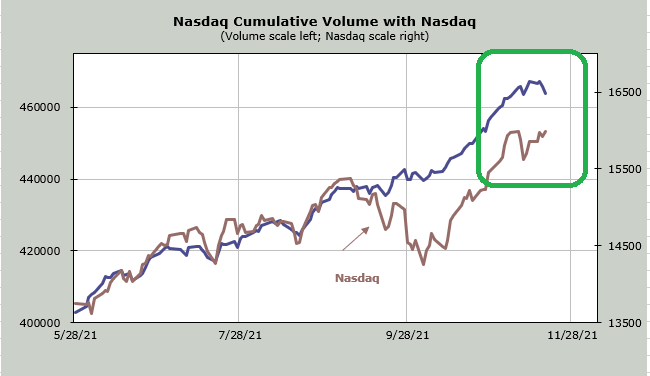 That brings me to the McClellan Summation Index for Nasdaq where I use volume, as well. It will now require a net differential of positive 4.1 billion shares (up minus down) to halt the decline. Similar to the NYSE, this gets oversold at a level that is usually positive 5.0 billion shares.

Notice on the chart on the far left, where the "what if" above the line while the market was on a tear upward. That was August 2020 and we know what happened in September 2020, Nasdaq fell 10% in a hurry. It also happened earlier this year but I view that differently because we were coming off that big correction. Even if I don't discount that, notice that Nasdaq peaked mid-April and headed south again. 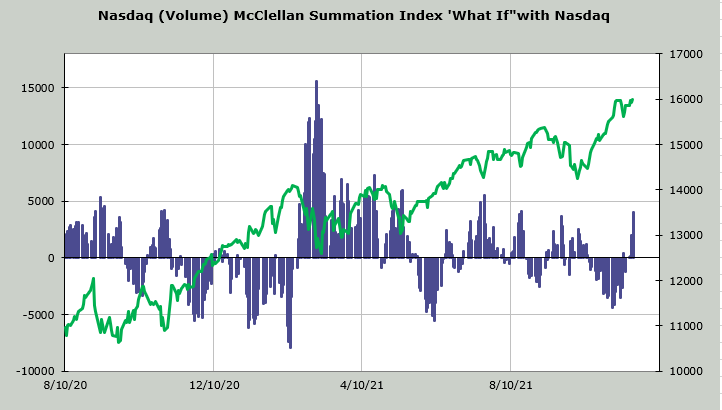 My point in showing these is that it is not healthy what is going on in the market. What is even more concerning is that it is occurring while sentiment remains so complacent. The National Association of Active Investment Managers Exposure on Thursday fell one point to 102. That's still complacent. The put/call ratio was .69 on Thursday. Again, that shows little fear. The 10-day moving average of the equity put/call ratio is heading up off a low base. It shows fear when it is near the top of the page, not coming off the bottom.

Sure, we've got an upcoming oversold condition, but we have complacency and a lot of deterioration under the surface.