That slice of paper? Ended up in a slimy puddle near the statue of George Washington in front of Federal Hall. Equity markets rallied into the close that afternoon. That was neither here nor there. The date was Friday, March 6, 2009. The S&P 500 had just traded at the level of the unmentionable about an hour earlier. The closing bottom would come on Monday, and then on Tuesday a bull market would rise anew.

The year 2009 was awful. You probably remember it well yourself. Lehman Brothers had collapsed a few months earlier, and now, it seemed everyone on Wall Street had lost their job. In early 2007, I had 23 "beeper" accounts. By 2009, 22 of them had either been laid off or their firms had folded. I was one of the luckier ones. I was offered a 48% pay cut (not where I would bottom) if I wanted to remain employed. I gratefully accepted.

There was a bar across Broadway from the New York Stock Exchange that used to open early in the morning. Everyday for a good while, it seemed that a collection of just-let-go floor traders and their staffs would gather there to say goodbyes. That was the reality of the times. I could take a second job. I did. that was a whole lot better than a family man losing health insurance for his family in a time of crisis. It seemed like everyone left was in the same boat, which did not really help morale.

I spent a lot of time back then at "Our Lady of Victory" Roman Catholic church on William Street, feeling sorry for myself... looking for direction. My prayers were answered. It seemed to happen over time. Years actually. I came to understand that I could fight back, that I would in fact do this. It would never be easy, but fear of failure had been washed away. The downside? Uncertainty. The upside? Confidence. Self-reliance.

There is much talk among market participants at this point on market direction. Let's just take a moment to catch our collective breath, shall we? Try to remember that U.S. equity markets remain in a confirmed uptrend -- until they don't. Are the charts in general, consolidating, as they broaden the trajectory of this trend to the right? Duh. Is there one among us who expected the parabolic rally that came in the wake of the fourth-quarter meltdown to go on forever? I did not think so. Does it become that much tougher from here? Well, your money is back. Why shouldn't it?

You will hear talk as the morning evolves that the Dow Transports have closed lower for eight consecutive sessions. Is this a concern? Of course. That's a growth story. First-quarter domestic growth is shaping up as barely growth at all.

Two "little somethings" that might not get much mention. The first quarter has been the weakest of the four many times. Seasonality is a minus here, not a plus -- and not a non-event. The Dow Transports, up 12.5% year to date, are still outperforming the broader indices over this timeframe, which is something that Dow theorists must consider. In addition, trading volumes appear to be trending lower as the indices move sideways. Am I extremely bullish right here? Not particularly. I also realize that stalling at a level (SPX: 2815) just below where markets have met failure on multiple attempts can read as bullish.

Advance/Decline has not been decisive. Down volume is beating up volume, but not in a rout. New highs continue to beat new lows. Remember what I told you about the 20-day simple moving average crossing over the 200-day? That is still in tact. The 30-day SMA is still 18 points away.

Perhaps markets need the RSI (relative strength) to back further way from 70. That would be healthy. Perhaps with a 9-day exponential moving average (-3) swimming in negative territory, the 12-day and 26-day EMAs (35 and 38, respectively) are just too far above zero for comfort. Perhaps we need to see that bearish crossover that will provoke algorithmic response in order to then make another run at the level.

Remember this, as well. Markets came into this week in a "sell the news" mode, based on a trade deal between the U.S. and China. Algorithms are written to read keywords in headlines. But there's still no news there, and won't be for at least three weeks, probably longer. So keep your chinstraps buckled and wear your flak jacket. I will offer you this one bit of advice that has served me so well. If something bothers you to the point where quality of life is impacted, then either get rid of it, or reduce it to the point where it does not bother you. Too easy.

So... FDA Commissioner Scott Gottlieb calls it a day, after an aggressive two years on the job. He said all the right things in his letter of departure. Still, biotechs took this news on the chin. The iShares Nasdaq Biotechnology ETF (IBB) rolled over hard at precisely 3 p.m. ET in New York, as that news hit the tape, to finish the day near the lows of the session. 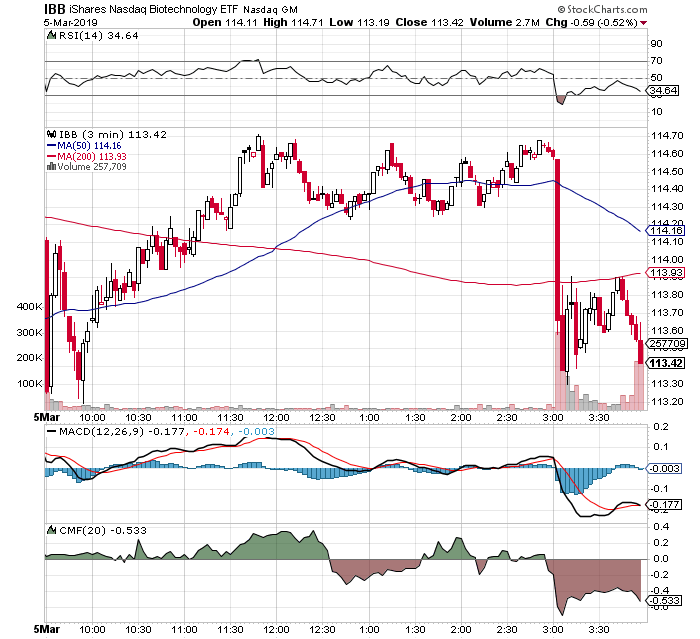 It has been under Gottlieb's leadership that there has been a great expansion of approvals for makers of generic drugs. In fact, 2018 was a record year for such activity. Teva Pharmaceutical (TEVA) is one such firm that has been a significant contributor to the generic market. Those shares sold off hard in early February as the firm missed Q4 expectations for EPS on a significant reduction in revenue.

Had TEVA shares bottomed in response to bad news? It seemed so. There's not a lot to get cheerful about. Debt simply dwarfs cash. Current ratios are below the "One level." Guidance for 2019 was well below what Wall Street was looking for. Short sellers took their profits. Shares held short declined from a rough 37 million in mid-January to something close to 23 million a month later. How I look at that is that now there is that much less interest out there on the bid side.

What I am really noticing about this name is the high volume around the $18 strike price for this May (earnings). That level by far trades the most volume on both the put and the call side with that expiration. Does somebody know something we do not?

My thought is this: Don't take a flyer on the call side for a rough $0.67, meaning that the trader would need to see the equity trade at $18.67 by then just to break even. Rather, I am thinking of selling the $18 (in-the-money) puts. Those went out at $1.86 on Tuesday night. You know the shares are trading a little lower in the pre-opening session. If I can get those off for maybe $2.15+, I may just pull that trigger. It would lend the trader a $15.85 net basis if forced to eat the shares. I'm playing this one by ear.

Well, That May Have Been a Mistake

You may recall that last month, I did it again. I got myself long some General Electric (GE) . You may be surprised to hear that I have never lost money on a long position in GE. That, my friends has had absolutely nothing to do with my skill, or lack thereof, in the choosing of a point of entry for this name, and has had everything to do with what has always been my strength as a trader -- risk management. Okay, so what now?

While speaking in New York City on Tuesday, GE CEO Larry Culp sort of said it all. Industrial free cash flow would be negative for 2019. This line item was indeed positive in 2018 -- to the tune of $4.8 billion. Somehow, there was no inkling of this rather dramatic turn of events little more than a month back, when the firm reported.

The good news for TheStreet's Stocks Under $10 subscribers is that we had vacated the last leg of that portfolio's long position a month ago above the $10 level. In case you follow and are wondering, I did cover my cascading series of puts expiring in April that I was short, so at least I do not have to worry about those coming back to life. By the way, that's why we cover short sales across the put space when profitability gets close to max. A trader can only get hurt trying to win that last dollar. 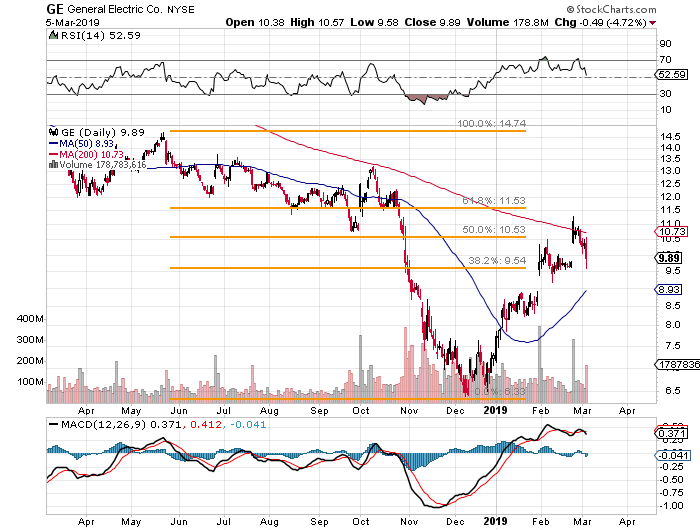 So, what now? The shares could easily slip below the $9.50 level and even approach levels around $8.90 short-term. That is worst case, in my opinion. What's Steven Tusa at J.P Morgan's target? $6. Oh joy. Note to self, never look past anything that guy says.

Actually, my equity position is still tiny, at entry level (10% of intended allocation), so I could just forget about it, and move on... but that's not me. I enjoy the fight. So, let's go there. The firm is expected to report on or around April 18. Remember, this is an exercise in risk management, we're not trying to turn this into some kind of large victory.

Note: If none of these options ends up being exercised, net basis drops by $1.34, or a 13.5% discount to Tuesday's closing price for GE. Worst case: The trader ends up tripling the long position, at a reduction in net basis that at that point would amount to $0.44. Best case: The traders gets called away at $10, which, for most folks depending on where the initial stake had been purchased, would be nicely profitable.

Guilfoyle is co-portfolio manager of TheStreet's Stocks Under $10 portfolio, Click here to learn more about this portfolio, trading ideas and market commentary product.

Get an email alert each time I write an article for Real Money. Click the "+Follow" next to my byline to this article.
TAGS: Earnings | Economy | Investing | Markets | Politics | Stocks | Technical Analysis | Trading | World | U.S. Equity