Sarge: How many days in a row can the market's lead story be this ever-dwindling trading volume?

Man in the darkened window: How long can the trading volume dwindle?

Sarge: You know I hate when you answer a question with a question.

Man in the darkened window: What?

Ralph Waldo Emerson: The ancestor of every action is a thought.

Sarge: So, this pause means that at least we're thinking?

Napoleon Bonaparte: Take time to deliberate, but when the time for action has arrived, stop thinking and go in.

Sarge: So, you encourage aggression once a decision has been made?

Sun Tzu: He who knows when he can fight and when he cannot, will be victorious.

Sarge: I think I get it.

Man in the darkened window: Get what? We're all in your head. Dingbat.

Sarge: I do get it. It's what we have always done. Do everything for a reason you could explain to a novice. Do nothing without. Thanks guys... Hey, check out the new kid.

"Mad" Anthony Wayne: Issue the orders, Sir, and I will storm hell.

Sarge: This new kid is going to be useful. Probably when the banks report next week.

The Why, Where and When

Thursday's markets remained rather quiet, for most of the day, anyway. It then got interesting. Unless one dozed off or turned on the Mets who were playing day baseball, one missed the impact of Federal Reserve Chairman Jerome Powell upon the marketplace. There was, for a moment, no fear. Check out the VIX...

Man in the darkened window: Cool trick, but can you do that again?

Sarge: Sure, check out the CBOE Options (Index Only) Put/Call Ratio.....

So, what we had on Thursday is an equity market where the Dow Industrials yet again closed practically unchanged while the S&P 500 (another new record!) and small- to mid-cap stocks warmed up just a little, but the Nasdaq Composite and Nasdaq 100 both warmed up a bit more than anything else, driven according to the Sector Select SPDR ETF performance tables by Technology (XLK) . Peeking inside that sector, we see that hardware, software and the semis were all somewhat hot. Energy (XLE) was as cold as ice, and though up more than 29% year to date really has not done "diddly" since late March.

True that, in aggregate, equity market trading volume remained anemic, the fact is that the U.S. 10-year note, or more broadly, the longer end of the U.S. Treasury curve, found strength (pushing yields lower) in Chairman Powell's soothing words, and this forced most of what accumulation there was into the tech and small-cap spaces, both of which reside more broadly at the Nasdaq Market Site than they do at the New York Stock Exchange. Hence, breadth was more like a jump-ball downtown, and much more positive up in Midtown.

First, we'll set the stage. The Department of Labor's Weekly Initial Jobless Claims number printed not only above expectations but also higher than the week prior for a second straight week, even as it appears that many states are jumping the gun just a bit on reopening, perhaps focusing more on vaccination rates than on troublingly elevated case counts of new infection. This prompted St. Louis Fed President James Bullard, who spoke about an hour ahead of Powell, to mention that he felt it was too early to even be discussing the pace of the central bank's asset purchase program.

Powell spoke in measured tone, and quite clearly. He made sure that anyone listening knows that he passes a "tent city" every day and that the U.S. economy still employs more than 9 million fewer individuals than it did 14 months ago. "We will not forget those people and we'll provide the economy the support that it needs until the job is done." Powell also downplayed the ongoing threat of consumer inflation, insinuating that he still feels that rising prices were indeed transitory in nature and that if higher prices were to move "persistently and materially" beyond comfort levels (whose comfort levels?), the Fed has the tools to curb such upward pressure.

Man in the darkened window: Psst... we all know what the tools are. That's the problem.

Paul Volcker: When people begin anticipating inflation, it doesn't do you any good anymore.

Sarge: Whoa... someone I've actually met. Miss you Paul, but on that last thought.... Rising prices still benefit anyone who is in over their head. The federal, state and local governments are all in over their heads. Not to mention a sizable portion of businesses globally. They all need inflation.

Man in the darkened window: So, is that why yields are rebounding overnight, putting some weight on Nasdaq futures?

Sarge: No. One word. China.

Sarge: Inflation, guys... The Chinese National Bureau of Statistics reported overnight that Chinese consumer prices for March not only surprised significantly to the upside, but accelerated greatly from February's pace.

Man in the darkened window as he fades into the dawn: The world is not ready for that.

Paul Volcker: I know how to fix that.

Sarge: Yup. We know you do. PPI in a couple of hours.

Gunnery Sergeant X, while biting off the head of a wounded bird: Better buckle that chinstrap.

A reader asked that I take a new look at Nvidia (NVDA) technically, and being long the name myself I figured the effort was more than worthwhile. 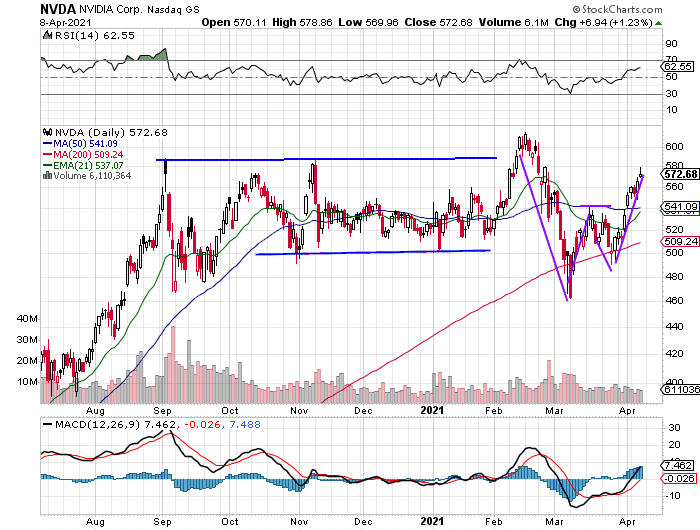 Readers will possibly recall that the last time I analyzed NVDA publicly, I drew attention to the basing pattern that ran from September into February. As the stock attempted to break out past that $588 pivot, we had placed a $670 target on the shares of Nvidia, which also is a holding of Jim Cramer's Action Alerts PLUS charitable trust.

As that attempted breakout failed along with the rest of big tech in February a rather short double-bottom pattern has developed over the past eight weeks or so. The stock is now into its current breakout past the $540 pivot created at the apex first spike in the classic "W '' formation. As relative strength is running a bit high but not yet overbought, and as the daily moving average convergence divergence (MACD) appears to be in good but not scary good shape, we have had to drag our price target in, to $645 from $670, as we are working with a lower pivot at this time.

We had given you a $514 panic point back then. It probably makes sense to move that panic point a bit higher, perhaps at this time to the 21-day simple moving average (SMA) at $537, but should that line cross over the 50-day SMA (currently $541), I would use the lesser of the two as this would be a "faux" golden cross and would be a buy signal for some swing traders.

Get an email alert each time I write an article for Real Money. Click the "+Follow" next to my byline to this article.
TAGS: Economy | Federal Reserve | Investing | Stocks | Treasury Bonds | Semiconductors & Semiconductor Equipment | Real Money