Charts of the major equity indices remain bullish and near-term uptrends. However, the data dashboard and valuation have intensified their cautionary signals.

These signals suggest the potential for some retracement of the current rally that may yield better buying opportunities, has increased in its probability. 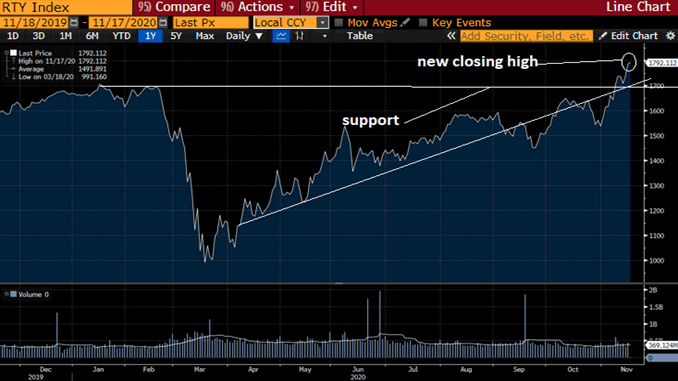 The equity indices closed mixed Tuesday with positive internals on the NYSE and Nasdaq on lighter trading volumes.

All the indices remain in near-term uptrends and above their 50-day moving averages.

Breadth remains positive as well, with the cumulative advance/decline lines for the All Exchange, NYSE and Nasdaq in uptrends and above their 50 DMAs.

All but one of the stochastic levels are overbought but have yet to generate bearish crossover signals.

The data, however, has intensified its cautionary message to a point that suggest near-term market risk remains elevated. 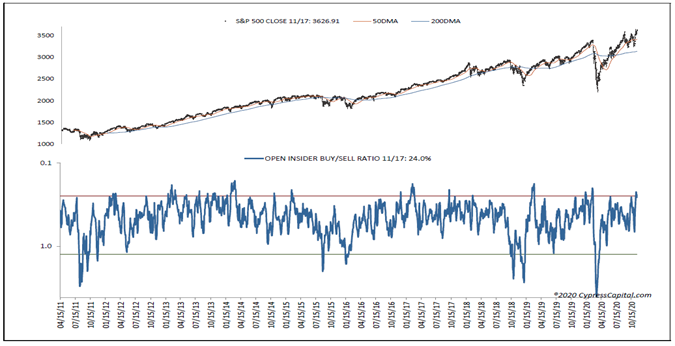 The Open Insider Buy/Sell Ratio (see above) is back at bearish levels at 24.0 as the number of insider selling transactions is well outweighing purchases.

As stated previously, when we have found insiders stepping up to the sell window while the leveraged ETF traders continued to press their leveraged long exposure. Insiders have typically been on the right side of the trade, in our experience.

Also, this week's Investors Intelligence Bear/Bull Ratio (contrary indicator) saw a decline in bearish advisors as bullish sentiment increased and remains bearish at 196.4/59.2. The same dynamic was registered on the AAII Bear/Bull Ratio at 28.69/43.02.

The valuation gap remains extended with the S&P 500 trading at a P/E multiple of 22.8x consensus forward 12-month earnings estimates from Bloomberg of $158.34 per share while the "rule of 20" finds fair value at 19.1x.

While the charts remain positive, the market's overbought conditions combined with sentiment and valuation levels continue to suggest to us that near-term risk has become elevated. As such, we are maintaining our near-term outlook for the equity markets at "neutral."