All but one of the major equity indices remain in short-term uptrends with cumulative market breadth showing a slight improvement. The data remains generally neutral as well. We don't perceive any shift in the current weight of the evidence to alter our near-term macro-outlook for equities.

The only index closing lower Thursday was the Dow Jones Transports. The rest posted gains with positive internals on the NYSE and Nasdaq.

The S&P 500 (see below) managed to print another new closing high while the Nasdaq 100 closed above near-term resistance.

All closed at or near their intraday highs, leaving all in near-term uptrends with the exception of the Russell 2000, which remains neutral. 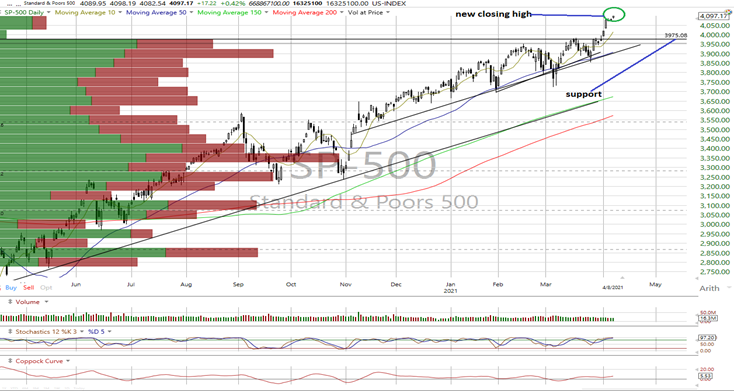 Cumulative market breadth improved slightly with the All Exchange turning positive as is the NYSE while the Nasdaq's cumulative A/D remains neutral.

The data remains generally neutral, including the McClellan one-day Overbought/Oversold Oscillators (All Exchange: +28.94 NYSE: +38.41 Nasdaq: +22.82). Cautionary overbought levels have yet to appear.

The Rydex Ratio (contrarian indicator), measuring the action of the leveraged ETF traders, slipped to 1.16 but remains bearish with said traders leveraged long.

Valuation still appears extended with the forward 12-month consensus earnings estimate for the S&P 500 from Bloomberg at $181.64 per share. This leaves the S&P's forward P/E multiple at 22.6x while the "rule of 20" finds fair value at 18.4x. We reiterate the valuation spread has been consistently wide over the past several months while the forward estimates have risen rather consistently.

The 10-year Treasury yield has slipped to 1.63%. It remains in an uptrend, though, with potential to test the 1.8% level with support at 1.55% but appears to have stabilized for the short term. We continue to monitor it closely as it has been having rather significant influence on the equity markets of late.

The charts and data suggest we maintain our near-term "neutral/positive" outlook at this time.

Is ViacomCBS Stock Broken? I Don't Think So - Here's My Plan

VIAC's first quarter performance knocked the cover off of the ball.

On PagerDuty, I'm Getting a Bearish Message

The charts and indicators of PD are pointed lower