While the latest stock market data is a mix of neutral and positive readings, the weakening of breadth plus some other technical factors on the index charts are causing us to make another shift in our outlook.

All of the major equity indices closed lower Thursday with negative internals and heavy trading volume as seen throughout the week.

Virtually all of the index charts closed on or near support with the Dow Jones Transports (see below) actually breaking support again, thus turning its near-term trend negative. 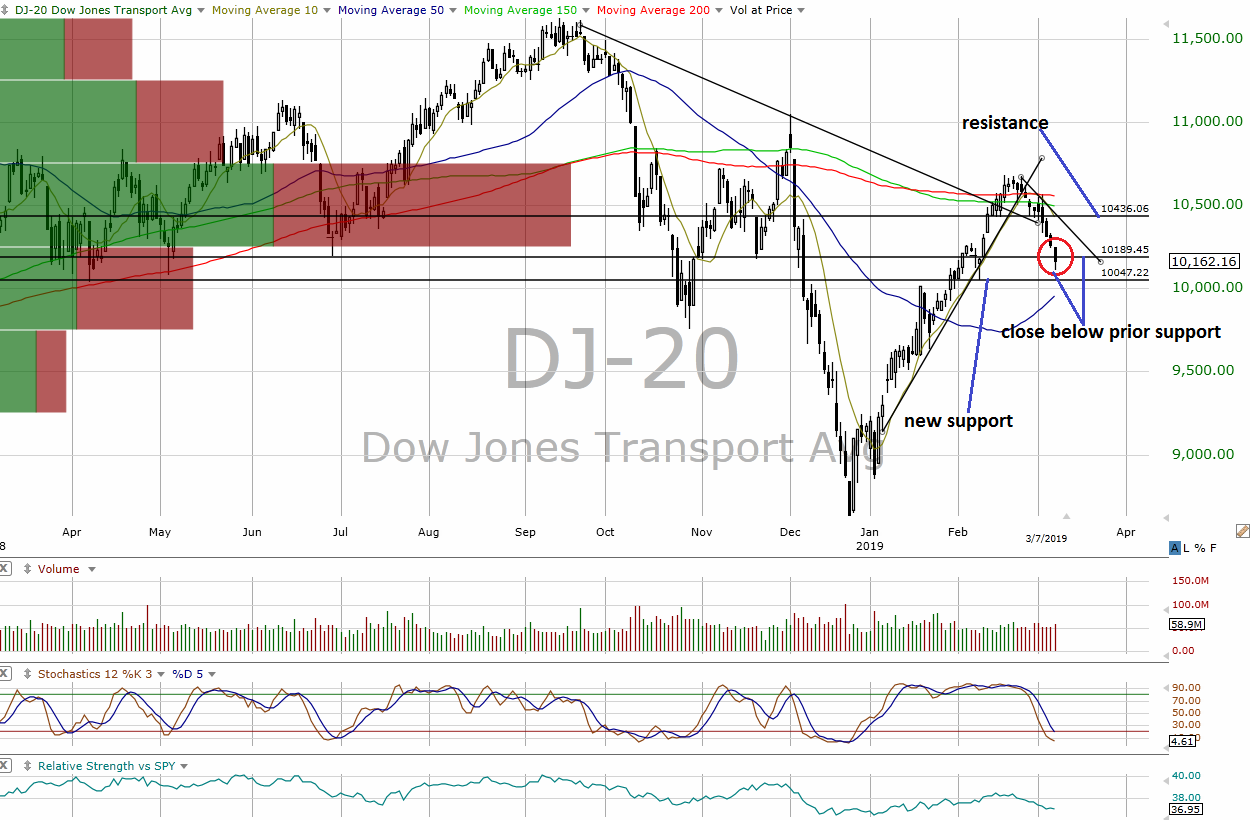 Some of the stochastic levels have become oversold but we would not use them as an actionable indicator at this point as they can stay oversold for extended periods. Bullish crossovers would be required in order to become more optimistic.

At this point, we would focus on market breadth, which has deteriorated notably of late. The NYSE cumulative advance/decline line (see below) has shifted to neutral from positive while those for the All Exchange and NASDAQ have actually turned negative. As such we have yet to see evidence in a positive shift from the recent chart action.

The NYSE Advance/Decline Line is short-term neutral and above its 50 DMA.

The data is a mix of neutral and positive readings with the 1-day McClellan Overbought/Oversold Oscillators remaining oversold (All Exchange:-94.61 NYSE:-97.91 NASDAQ:-95.98). While encouraging, they are capable of getting more oversold, thus tempering the signal.

The Open Insider Buy/Sell Ratio is a neutral 31.3, as is the detrended Rydex Ratio at 0.39.

The S&P 500 is trading at a forward P/E multiple of 16.4x 12-month consensus earnings estimates of $167.37 per share, versus the "rule of 20" fair valuation at 17.4x, suggesting the market is currently somewhat undervalued. However, a narrowing of the spread has occurred over the past several weeks as estimates have declined with issuers generally cutting back their projections during the recent earnings season as the S&P rose in price.

While still comparatively undervalued, the S&P remains much less so than a few weeks ago.

The weakening of market breadth, the level of chart prices remaining extended well above their 50-day moving averages and a gradual decline in forward earnings estimates for the S&P 500 cause us to now shift to a "neutral" outlook for the major equity indices.

Get an email alert each time I write an article for Real Money. Click the "+Follow" next to my byline to this article.
TAGS: Investing | Markets | Stocks | Technical Analysis | Trading | U.S. Equity