All the major equity indices closed at or near their intraday highs Thursday, but none were able to violate resistance or trends -- leaving all in near-term downtrends.

Nevertheless, indicators suggest markets remain oversold, and we may be starting to see a positive shift in the psychology numbers. 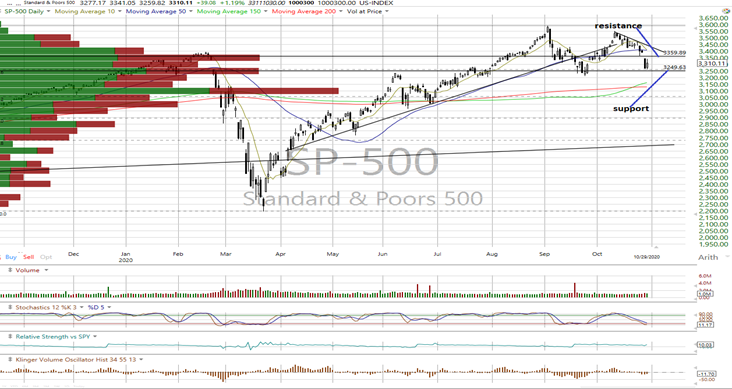 All the equity indices closed higher Thursday with positive internals on the NYSE and Nasdaq but on lighter volume.

While all closed near their intraday highs, the push was unable to bring any of the charts above their respective resistance levels or near-term downtrend lines.

As such, all remain in negative trends and below their 50-day moving averages.

The positive breadth in Thursday's action also left the cumulative advance/decline lines for the All Exchange, NYSE and Nasdaq negative and below their 50 DMAs as well.

The stochastic readings remain oversold but have yet to send bullish crossover signals.

The data saw some improvements, in our opinion.

The one-day McClellan Overbought/Oversold Oscillators that implied a pause/bounce from the recent rout before Thursday's open remain oversold but not as extreme as Thursday morning (All Exchange: -69.66 NYSE: -81.62 Nasdaq: -61.04).

Psychology is starting to show some encouraging signs, in our view.

The Open Insider Buy/Sell Ratio remains neutral but lifted again to 47.8. They have increased their buying activity throughout the week.

In contrast, the Rydex Ratio (contrarian indicator) has dropped to a neutral 0.8 as the leveraged ETF traders have lightened up on their leveraged long exposure. Should this dynamic continue, we would view it as a positive transition in sentiment.

The valuation gap, unfortunately, has expanded back to overvalued levels with the S&P 500 trading a P/E multiple of 21.2x consensus forward 12-month earnings estimates from Bloomberg of $156.08 per share, while the "rule of 20" still finds fair value at 19.2x. As such, valuation remains a concern.

While we believe the markets may be heading toward some attractive buying opportunities, it is too early to alter our current "neutral/negative" outlook. More positive signals need to be seen before becoming more enthusiastic.