Despite some positive action, all of the near-term downtrends for the major equity indices remain intact as the charts now approach significant resistance levels. However, two of the indices have possible "hammer" formations suggesting near-term lows may have been established on those charts.

Let's take a deep dice into the charts and data.

All of the major equity indices closed higher Thursday and well above their intraday lows with positive internals on the NYSE and Nasdaq but on lighter trading volumes.

Yet, while all posted gains, no violations of resistance or near-term downtrends were generated, leaving all in said downtrends.

The only notable events were seen on the Dow Jones Transports (see below) and Value Line Arithmetic Index as both appear to have generated possible "hammer" formations that suggest the potential for the establishment of short-term lows on those charts. 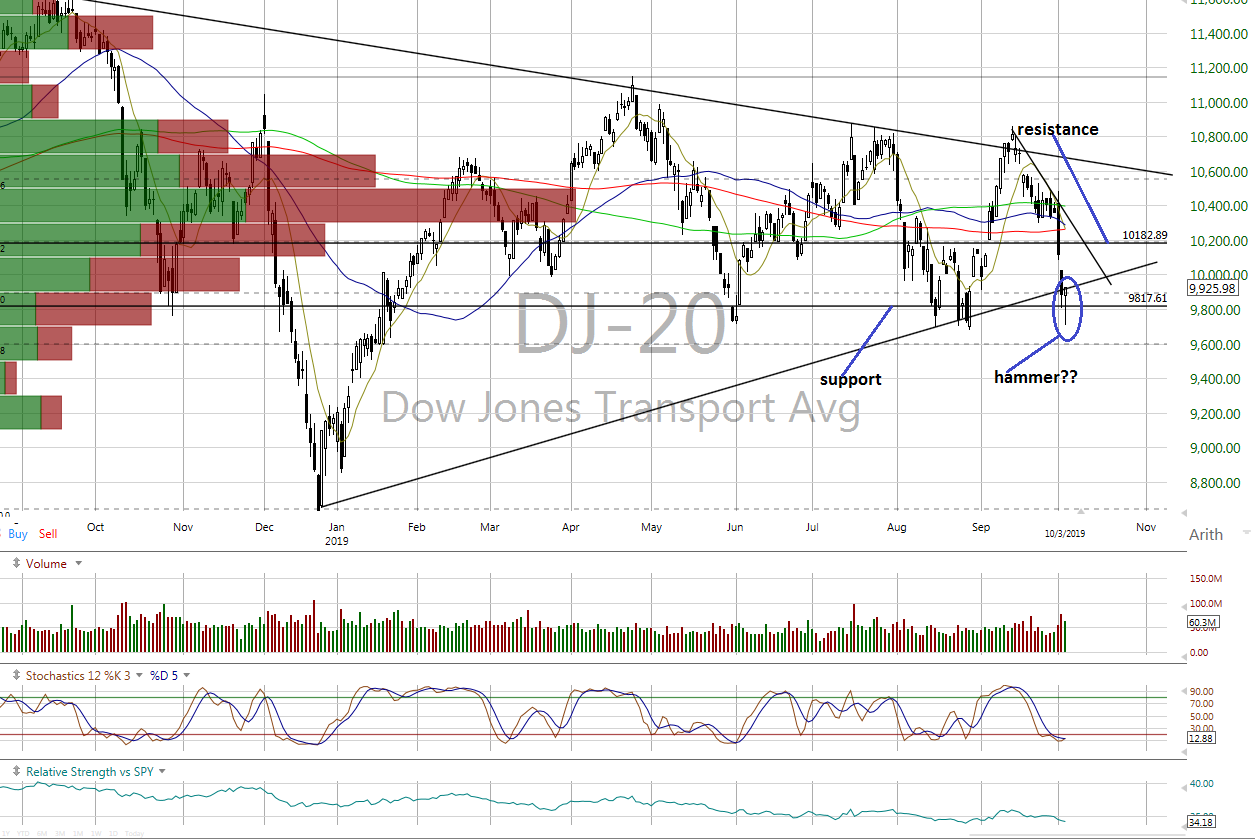 The stochastic levels remain oversold across the board but have not flashed "bullish crossover" signals at this point.

High "volume at price" (VAP) may take on greater importance as most are now seen as resistant with the exceptions of the S&P 500, DJIA and Nasdaq 100 being neutral. Said VAP levels imply significant strength would be required in order to be overrun.

The cumulative advance/decline lines remain negative across the board.

All of the one-day McClellan Overbought/Oversold Oscillators remain oversold although much less so than Thursday's reading that implied a pause/bounce in the markets (All Exchange:-69.68 NYSE:-68.0 Nasdaq:-73.43).

The detrended Rydex Ratio (contrary indicator) is a neutral +0.02 as is the percentage of S&P 500 stocks trading above their 50-day moving averages at 37.8%.

The Open Insider Buy/Sell Ratio is also neutral at 56.5.

Valuation is attractive with forward 12-month earnings estimates for the S&P 500 at $175.16 per share via Bloomberg, leaving the forward P/E multiple at 16.6x, while the "rule of twenty" finds fair value at 18.5x.

While yesterday's suspected bounce became reality, we are maintaining our near-term "neutral/negative" outlook for the major equity indices as Overbought/Oversold levels will likely moderate as the indices approach significant resistance levels while downtrends and cumulative breadth remain negative.