The trend is our friend. If we play our cards right.

It's always nice to pick the right stocks, and a good stock-picker can survive, if not thrive, even when a trend may be difficult to pick up on.

For as long as the "point of sale" is controlled electronically, technicals will likely reign at least for short-term traders over fundamentals. That's the way it is, not the way it should be. We adapt. We overcome.

This actually makes the entire game just a little bit easier for traders, but over a longer time frame, probably a bit more dangerous for investors.

No, this is not one of those stories. Swimming well off shore can be dangerous. Just fun for a little while? That's body surfing. Recognizing which waves are likely to offer up a nice lengthy ride, with the least amount of work, is the game. Part of the same game is also recognition of which waves might break your neck and letting those waves pass by.

Think of working a P/L for a living as body surfing. Some waves make for a good ride. All the way to the beach. Other waves deceive, pulling you in directions you do not want to go. Undercurrent. Then there are the waves that are so huge, that they tempt the thrill seeker that lives within. These waves sometimes are so large that they crash not on water, but on the sand. With you atop. Headfirst. Grateful for the dislocated shoulder, knowing it could have been, or should have been much worse.

The S&P 500 bottomed most recently on Sept. 24. The Nasdaq Composite on Sept. 21. Then tested that spot again on the 24th. That day, the 24th, was actually when the market returned to trend after three weeks of pressure following market highs on Sept. 2.

Readers know that it took me weeks to confirm (using the methods that I have always used) that the market's trend had indeed returned to its northerly trajectory. I have always been comfortable with being late to trends. If a trend is real, you will surely forget that you were late. Trust me.

Now, we find ourselves locked in a losing streak, that is if one runs a net-long portfolio. The majority of us do. There were bright spots visible over those four days. The Nasdaq Composite offered up at least some hope over the first four days of this selloff, as trading volume clearly showed a lack of professional participation.

Monday was a bit different. Monday was a broad-based selloff that showed some signs of not just profit-taking, but some risk-off behavior by professional managers. So, what gives? Why now? Or, might this be yet another false flag?

Monday's market presented as ugly. Very ugly. From top to bottom. The Dow Industrials, Transports, and Utilities all got tagged. The S&P 400, 500, and 600 were all sent out to the woodshed. The Nasdaq Composite, Nasdaq 100, and Russell 2000 all met up with the "ugly stick."

All 11 sectors closed lower for the day, as did the vast majority of industries residing within those sectors. Somehow, from within the industrials, the airlines posted a positive day, but even that feat was more the result of barely hanging on throughout the afternoon, than from a durability in investor demand.

There are a couple of volume-based positives. You know that's where I go almost daily. That and put/call ratios. For the record, put/call ratios are in no way alarming right now. For these are the spots where reading the tea leaves actually becomes meaningful.

Losers easily beat winners at both of New York's primary equity exchanges. Okay. we expected that. Umm, Sarge, you mentioned positives. Oh yeah, thanks for getting me back on track. Declining volume crushed advancing volume at the NYSE, but trading volume declined dramatically on Monday from Friday (which was not a "down" day for either the S&P 500 or Dow Industrials). That doesn't offer "old economy" stocks a pass exactly, but it surely does not yet spell their doom. Let's head uptown.

Now, at the Nasdaq Market Site, declining volume still beat advancing volume but this was a much closer ballgame than headline index/average performance might suggest. Yes, aggregate Nasdaq-listed trading volume did increase on Monday from Friday, but remains below "normal."

I would say that we have an uncertain market, which to quote one of our presidential candidates might sound like a bunch of malarkey, but this is what I think. Give me a minute.

I do understand. As you do, I see the many pundits that appear on financial television. I took a break from the financial media after I realized how severe and twisted my road to recovery from Covid-19 was becoming (Don't be a fool, wear a mask). What I see is almost enough to get me off of the bench.

Many generalize. Many must speak on behalf of larger firms, therefore the thoughts you hear have been cleansed through a legal department. I have worked for larger firms. We were not allowed to speak, unless legal got the questions ahead of time and could prepare the answers. It was not worth the effort. This is one reason why I keep the TV on mute most of the day. One reason why I almost giggle when I have business radio on in the car, and I do hear these carefully manicured answers coming out of the mouths of folks working for large sell-side firms.

For years now, I have been writing about my thoughts. Started back in the dark ages when it was just for the clients of the firms that I worked for. I prefer to work for myself. No clients to answer to. No risk managers to snicker at. These thoughts at this point are written solely because I am a nut who starts working at 03:30 every morning, and I want you to benefit from my experience. So, these thoughts that were once the domain of sales traders, and hedge fund portfolio managers are now yours. For better or worse.

When I am wrong I lose money... and I most surely do at times. Bear in mind that this game is as much about slugging percentage as it is about batting average. Some of the best traders I have ever known were wrong 70% of the time, but when they hit it, they hit it into the upper deck.

Simple rules, like price targets and panic points are everything. Why? Because they increase the odds of making 20% on winners while limiting losers to 8%. Seems easy? Seems boring, but winners are consistent, and consistency wins. There will always be more than one way to win, and more than one way to at least prevent severe defeat. Know the game.

Monday's lackluster behavior is largely being blamed on the lack of an agreement between the administration, the House, and the Senate in putting together a next phase fiscal support package. There is certainly truth to this as a number of variables seem to have gone awry.

The president appears to be willing to go beyond even the net $2.2 trillion that House Democrats have offered, but spent quite differently. The Senate, unless I just don't understand what they are doing, appears to be finding fiscal religion at precisely the wrong time. Yes, I am a fiscal conservative. I see potential for something awful down the road should budgets and deficit spending never be constrained. That said, I also know people who have been out of work since March, and others who have been called back for two weeks here, and a month there as demand for their businesses has been unpredictable.

There is another take, beyond the stimulus package story, that Ben Levisohn leaned on at the Barron's website last night. Apparently over the past week, according to RealClearPolitics, former Vice President Biden's lead in an average of national polls over President Trump has narrowed from 10.2 percentage points to 8.9. Biden's odds of winning the election according to betting odds has gone from 67.5% a week ago down to 60.4%. This as numbers posted on CNBC last night showed new voter registration as decisively Republican in a number of swing states.

I am not saying that the market favors either presidential candidate. We already know that the market did very well under President Trump, and very well under President Obama. I don't think markets fear either man. I do think that markets had priced in a potential "blue wave," which could mean a larger stimulus package before it means higher corporate income taxes and capital gains taxes as well as a tougher regulatory environment.

By pricing in such a wave, markets were pricing in an uncontested election. Now, perhaps in addition to having to wait longer for stimulus, the market may now be in the position of pricing in some election week uncertainty that it had already started to price out. In short, the next two (to six) weeks could just be ridiculous.

I love handles. I love handles of considerable depth when added to cups, and then providing breakouts above pivot. I prefer to add on momentum upon that breakout. That's more of a "sure thing," though there are no sure things in baseball.

However, as my Twitter followers know, I pulled the trigger on an Amazon (AMZN) add late in the Monday session and thought very much about doing so in Advanced Micro Devices (AMD) as well. What makes these adds tough is that both names are trading so far above net basis, and once one is close to paying with "just" house money, who really wants to put their own dough back on the table? Still, the setup is becoming tempting, especially given the likelihood of coming volatility. 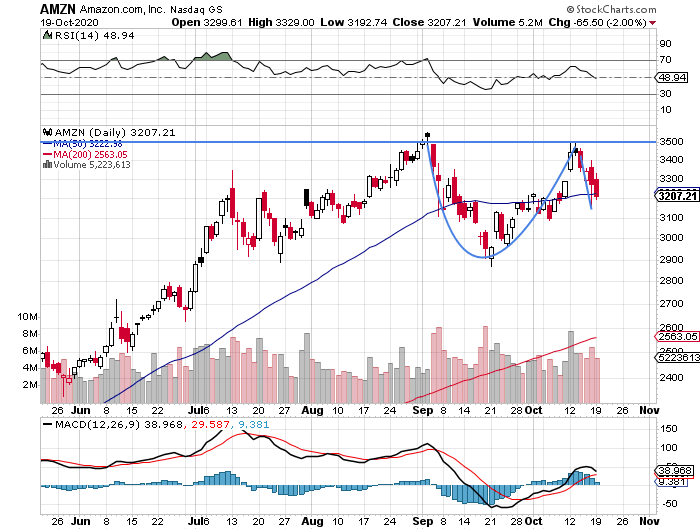 Sould Amazon react well to the name's 50-day simple moving average, this could be a "cup with handle" pattern in the making, with a $3,500 pivot. I would obviously have to increase my $4,000 price target should we see this develop, but it is on my radar and I did add to my equity stake on Monday afternoon.

My Amazon long position is currently larger than it has ever been. Now look at the similarity in the next chart: 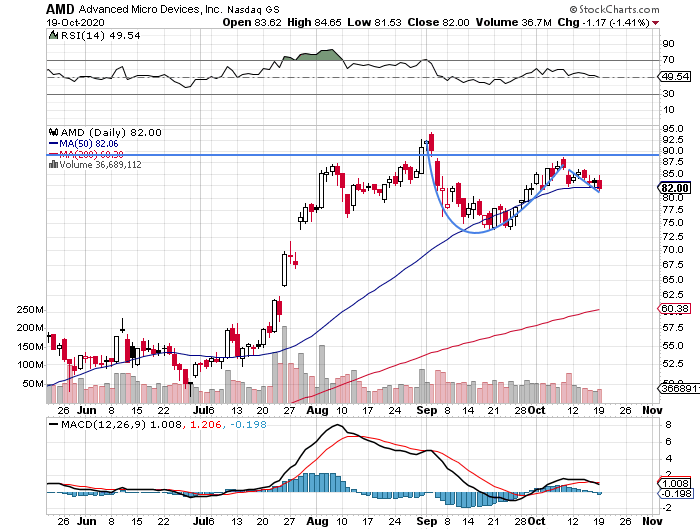 Hmm. Thinking out loud, should the market give me $89, I'm thinking that I can get $107. Just a kid from the neighborhood with an opinion.

Have a good day, gang and remember, even when we're wrong, upon this side of the dirt we awoke this morning. Rock and roll.

(Amazon and AMD are holdings in Jim Cramer's Action Alerts PLUS member club. Want to be alerted before Jim Cramer buys or sells these stocks? Learn more now.)

Get an email alert each time I write an article for Real Money. Click the "+Follow" next to my byline to this article.
TAGS: Earnings | Economy | Indexes | Investing | Markets | Politics | Stocks | Trading | U.S. Equity | Coronavirus