The facts are quite plain. The U.S. Senate got their act together while you slept and passed the $2 trillion fiscal support bill. The bill now heads to the House of Representatives for a vote expected this week, and then on to President Trump's desk for a signature. As I work my way through the dark hours, I see most foreign equity markets trading lower. I see U.S. equity index futures trading below fair value. Some have already asked me why that would be, if indeed fiscal help is already on the way. I will try to explain at a minimum how I understand it.

Let's put Wednesday in perspective. Day two for the S&P 500 and the Dow Jones Industrials. What does "day two" mean. Exactly how it reads. Two days of rising prices on rising volume. Nice, but not that meaningful. We all know that in order to reassure ourselves (though quite honestly, we are never really "sure" of anything), what we need to see is a sort of break-away type day, a day where prices beak out significantly, still on rising volume, but days after it already appears that a bottom may have been put in.

In other words, the chart must look like we already have a very small base and then traders thought to themselves, "Hmm, I wonder if this is "go time." After having that thought, they then decided as a group that it was. That's what the chart should look like. One can see, below, that the S&P 500 is set up for a bullish-looking crossover of the daily Moving Average Convergence Divergence, but also nears a "death cross," which would be a bearish signal. Mixed signals. Oh joy. 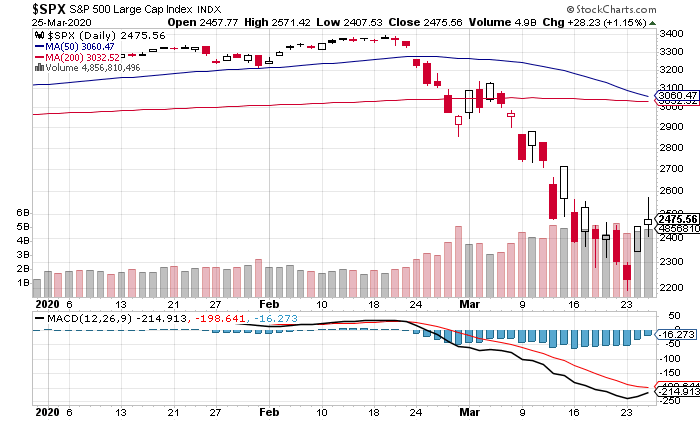 To this trader (who is your favorite), it appears, and remember that there are no sure things in this sport, that the Nasdaq Composite (which closed in the red on Wednesday) is actually closer to making the kind of statement that I want to see. 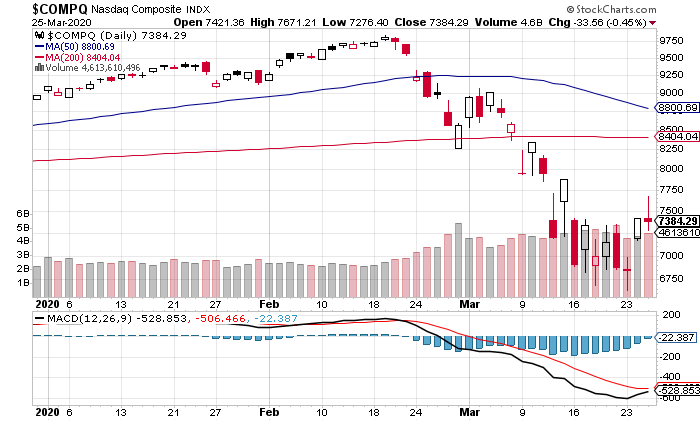 The Nasdaq Composite is actually now about five days into the process, still shows me the potential for a bullish Moving Average Convergence Divergence move, but stands further away from a potentially damaging "death cross."

Does this mean that traders should be putting all of their eggs in a "tech basket"? No. I can't tell anyone else what to do. What I am saying is that the Nasdaq Composite (and by proxy, the tech sector) are my canaries in a coal mine. We do not know if the process of feeling around for a bottom works until after it is obvious. We never do and that's fine with me.

Why is that fine?

Simple. Many such attempts do fail. I am telling you what I watch for. We are close to a moment of heightened risk. Should trend shift and a trader miss the turn? Big deal. If the trend has actually shifted, money will be made even by below-average traders in the coming days. I can be great at being a below-average trader. Rock on. If not, my thought would be that I at least understood what was going on around me, maintained a heightened level of situational awareness and protected my family the best I could. Let's move on.

The positives are huge. "Don't fight the Fed." Heard it all my life. "Unlimited firepower." True enough. Fiscal help is on the way. That much is almost surely also true. Dollars are headed to individuals, families, small businesses, large businesses, States & municipalities, hospitals, veterans, etc.

I could go over the coming benefits with you if you like. That would take up my entire column and make for some very boring reading. Besides, I am guessing that at least 27 or more of my fellow financial talking heads will go that route. It's easy to just regurgitate information. I want regular folks to understand how I think, and use my experience as one building block in the development of your own. That's how I was built. Because other folks taught me.

What I am trying to convey here is that fiscal and monetary authorities have basically done all that they can in the short term (assuming the House behaves as if people are counting on them) in the way of ensuring that markets and systems function as well as they can, while replacing organic cash flows with a substitute. What this does for afflicted parties is bridge (or try to) a temporary period of insolvency of unknowable duration. That means that we just don't know at this point if, or how many times, we as a nation will have to go back to this well. I think at least once.

This morning (Thursday), as clocks on the east coast strike 08:30, this nation will learn the initial depth of this lack of organic cash flow at the individual and household levels, and this will serve itself as a proxy for a lack of cash flow at the next level.. small to medium sized employers. I don't know if ever a macroeconomic data point has been as closely watched as is this week's report on Initial Jobless Claims from the Department of Labor. Followers will note, below, that I have not penciled in an expectation this week for that print, and that is one that I almost always venture out on. I just do not know. Among my more professional follows, I do not see an expectation below 750,000, which would be an all-time record. I also see numbers that approach 3 million. The consensus seems to be somewhere between 1 million and 1.7 million.

As a trader, I expect an epic algorithmic reaction across futures markets should this number surprise -- and let's face it, almost any number will be considered a surprise. A fellow trader asked me if this might be a "good news is bad news" situation for the markets. That, to me implies that weaker macro would make the Fed think or behave more dovishly. Hmm, speaking just for me, I think markets understand right now that the Fed is extremely dovish and has to be for a good while ahead. So, if extremely loose monetary policy is baked in... and extremely loose fiscal policy is baked in, then what is not baked in? Ahh, that is our quandary.

What is not priced in would be rising numbers of folks sick with the Covid-19 infection, as well as the costs, depth and length of the negative impacts of this pandemic on not just organic cash flows, but on human morale. So, the unknown is a "depth of negative" type perception for market thinkers?

We all know several people whose families have been impacted by now. Time to circle the wagons and defend each other from a psychological perspective. Let 'em know when they hurt, they they stand not alone, nor will they ever. Not ever. For tomorrow, it may be us depending on them. For tomorrow, nothing is assured, nor ever taken for granted. For tomorrow, the waves will crash on the beach, and the critters of the forest will go about their business. The sun will rise, the wind will blow and at the end of that day, we will know... know that as Americans, we did not fail each other because we never will. We never will.

I ask of you three things this day.

1) Thank whoever you've got to thank that you stand on this side of the dirt this morning.

2) Place a U.S. flag somewhere that you can see it when you get weak.

--Took profits in Zoom Video (ZM) earlier this week. Still looking to get back in if i see a discount today. Working from home is not going away anytime soon, and may become the norm for white collar workers. This also makes adding to my existing long in Microsoft (MSFT) likely.

--On that note, there has been a terrific increase in demand for broadband traffic as traffic on the roads has dwindled to a trickle. I would expect to add to my existing Verizon (VZ) long this week.

--Finished extracting my book from the ViacomCBS (VIAC) long and all of the hair I had attached to that mistake. Wednesday's pop actually made the whole venture far less awful from a P/L perspective, actually turned green for me... but the time and energy can never be replaced.

--BP PLC (BP) is another name that finally went green for the book, even omitting dividend payments. Have certainly reduced, may not go as far as flat on this one as it has, for some time, been my last energy name. I am just not sure that I am willing to have zero exposure to the entire sector. On that note, if I hadn't gotten my tail kicked in oil services last year, I would probably be looking at Schlumberger (SLB) at this level after yesterday's negative sounding announcements (regarding CapEx, Covid-19).

--As to Nike (NKE) , I never got my price for the $75 puts, meaning that I am long the $80 puts without being short at the lower strike. I see a nice discount in Nike equity today, and I'll take the money and run ahead of Friday expiration.

Get an email alert each time I write an article for Real Money. Click the "+Follow" next to my byline to this article.
TAGS: Earnings | Economy | Investing | Markets | Politics | Stocks | Technical Analysis | Trading | U.S. Equity | Coronavirus