Friday morning. You've made it. So far.

The S&P 500 bottomed out on Friday of last week, at 3,636. The Nasdaq Composite hit its recent nadir last Thursday at 10,565. This Thursday (last) night, the S&P 500 closed 4.37% above and the Nasdaq Composite closed 6.31% above those lows. For the most part, this week's tests have entered into the past tense. Key among those events were the twin appearances made by Fed Chairman Jerome Powell as he testified before the Senate Banking Committee and then the House Financial Services Committee.

There were no outright surprises on Thursday as Powell stuck to what he laid out on Wednesday. On inflation, Powell said: "We can't fail. We really have to get inflation down." On the big question, which is the 800-pound gorilla in the room, when asked how the Fed would react in a situation where the US economy were in a state of contraction, as unemployment grows, but high consumer inflation remained persistently high, Powell said, "In that hypothetical situation, that would be a setting in which inflation could be expected to come down, I think we'd be reluctant to cut."

I do not dislike Powell, and perhaps that colors to some degree a personal bias, but I thought the Fed chairman came off as earnest and admittedly a little embarrassed. Powell took ownership of underestimating both the pace and durability of this spate of inflation. He noted that inflation was already elevated prior to Russia's invasion of Ukraine. He came off as a man on a mission with a focus on the price stability side of the Fed's dual mandate, probably to the detriment of the full employment side of that mandate, which may unfortunately be necessary.

Powell, again my opinion, also came off on Thursday as the most honest person in the room, by a mile. Markets either liked what Powell said or understood that the intent here will bring the US economy to the doorstep of recession. Bonds rallied, forcing yields lower, which had a positive impact on equities. For now.

I know, you hear the talk of mild or deep recessions. Don't listen to the malarkey. We will not truly understand the depth of any recession until we are in one. Sentiment changes and decisions are made during economic recessions that further impact that sentiment, forcing other decisions around both business and household spending.

You hear now from economists too young to remember about the shallow recession of 1990-1991. Nine months. Short. Not really too much damage from the view of a 30-plus year look-back. Oh, how folks complained about that recession at the time. A president who had just won what was a popular war lost his job over that recession. Recessions are never, ever easy.

The rotation is real. For how many sessions in a row now has capital flowed into the four "defensive" sectors and out of the "cyclicals," especially Energy.

On Thursday, seven of the 11 S&P sector-select SPDR ETFs closed in the green, with Utilities (XLU) , Health Care (XLV) , the REITs (XLRE) and Staples (XLP) out in front. This has been the norm. Since last Thursday, Health Care has tacked on 6.39%, the REITs 6.18%, both well ahead of the other nine sectors on the five-day performance tables. Energy (XLE) has given up 8.33% since then. No other sector SPDR has surrendered more than 1.33% over that same time frame.

If the defensives are out in front, and the cyclicals have been left behind, where does that leave growth? Technology (XLK) is up 4.59% over these past five sessions, with the Dow Jones US Software Index all by itself outperforming any single sector, up 6.84%. The stars there have been Unity Software (U) and Snowflake (SNOW) , up 35.37% and 25.12% respectively. The Dow Jones US Semiconductor Index has gained just 1.84% in comparison. The Communications Services SPDR (XLC) is up 3.58% since last week's bottom.

On Thursday, the yield for the US 10-Year Note dropped to 3.09%, which is where I see it now as the US Two-Year Note dropped to 3.01%. I see the Two-Year paying as much as 3.04% here on Friday morning as the curve appears to be flattening early today. The Three-, Five- and Seven-Year Notes all remain inverted against the US 10-Year, which is a negative. However, there is no Treasury security close to inverting against the 30-Year Bond this morning, which is an improvement from what we saw earlier this week.

There was what appears at surface level to have been a rather broad rally on Thursday. The perception is not incorrect, but is somewhat misleading. The Nasdaq siblings led the league, up 1.62% for the Composite and 1.47% for the 100. The Russell 2000 ran 1.27% for the session. Every other major and semi-major index gained less than a percent for the day, but gained nonetheless.

Market breadth, however, was a bit gnarly. Winners beat losers at the New York Stock Exchange by a rough 4 to 3 and at the Nasdaq Market Site by close to 7 to 4. That said, advancing volume took just a 48.9% share of composite NYSE trade. Advancing volume did take a much healthier 71.4% share of composite Nasdaq-listed trade, so there is that. Aggregate trading volume was nearly unchanged on Friday from Thursday for NYSE-listed stocks and down just a smidge for Nasdaq names.

The Federal Reserve released the results from this year's stress tests for the 34 largest banks in the US on Thursday evening. The simulated test was more severe than the 2021 test. Still, all 34 banks tested passed. Aggregate capital ratio declined to 9.7% during the test, which is still more than double the Fed's minimum requirement.

The scenario this year included a US unemployment rate rising to 10%, assumed a 40% decline in commercial real estate prices, a 25.8% decrease in home values, widening corporate credit spreads and a 55% decrease in stock market values. Two big banks, JPMorgan Chase (JPM) and Bank of America (BAC) , saw their capital levels fall further during this year's simulation than during last year's on higher loan losses as well as losses in trading.

News is not expected on either how much or if the large banks will alter their plans to return capital to shareholders based on these tests until Monday. Some analysts see increases made to dividend payments this year, but a decrease in share repurchase programs.

In an interview on Thursday, JP Morgan strategist Peng Cheng said "There's been a trend of weakening demand. It's fair to say that retail has capitulated." Not that I would be surprised. Institutions, hedge funds and pros of all types have reduced equity exposure and gone to much higher cash levels. That we know.

This would be huge if true, however. We have seen it a hundred times before. The do-it-yourself crowd tends to time markets poorly. That could help put a floor under this market, at least for now. However, all bets are off in a recession of any significance. According to JP Morgan, as of June 13 all trading profits made by retail investors during the meme-stock era had been returned.

If JP Morgan is correct, I sure do miss the days where capitulation brought with it the yelling, screaming and gnashing of teeth that made it obvious. Panic? We do not feel panic as easily when it is delivered algorithmically through high-speed pipes at a point of sale technically in New York, but really off at some safe location in New Jersey. Nervous mayhem was a little easier to detect when it was 30 or 40 (or more) floor traders in colored jackets fighting over Spanish pieces of eight in a glorious mosh pit of doom.

Whaddaya Make of This? 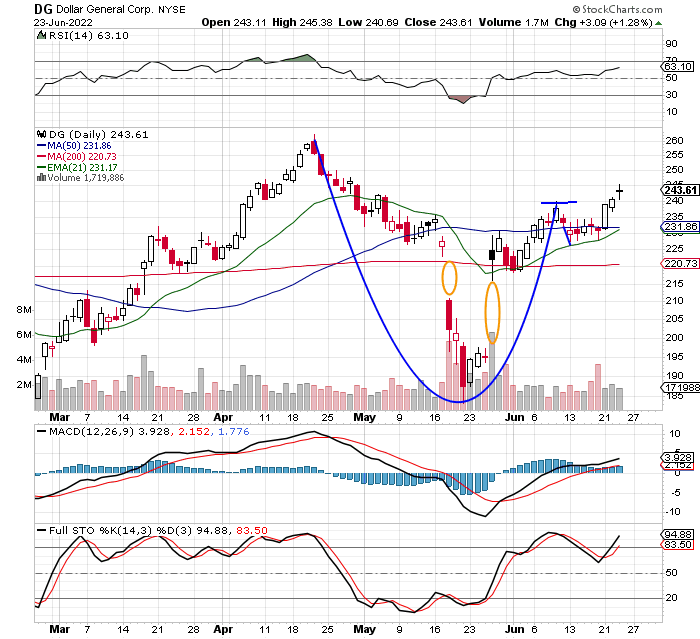 Is Dollar General (DG) breaking out? If that's a cup with handle pattern with a $240 pivot, then that's one heck of a funky-looking cup with handle... and the stock is breaking out. Relative Strength is good. Daily moving average convergence divergence (MACD) is in fine shape.

That said, the Full Stochastics Oscillator is reaching for "overbought" territory. We do see the May 18 through May 25 bullish island reversal. But -- and this is a big but -- the stock did leave an unfilled gap between $197 and $216 in its wake.

Now, unfilled gaps do not have to be filled, but we know that sooner or later they usually do. DG would need to correct a rough 19.1% from Thursday night's closing price in order to completely fill that gap. I am not in this name. If you are, handle it with care. Maybe take some off. Just an idea.

Get an email alert each time I write an article for Real Money. Click the "+Follow" next to my byline to this article.
TAGS: Economy | ETFs | Federal Reserve | Investing | Stocks | Technical Analysis | Treasury Bonds | Retail | Real Money