Pop Goes the Weasel? Shell game? Either or? All or none? Whack a mole? Call it what you like.

After a week where even the weaker sectors of our equity marketplace showed a nice shade of green (I think they call it seafoam down here) after five days, the nastiness that is allocation through high-speed algorithmic selection (profit-taking) returned to the fold. This as trading volumes returned to reduced levels in the wake of last Friday night's rush to get trades executed ahead of the Russell index rebalancing that came one week after the boost to trading volumes provided by a "triple witching."

On that note, I would like to show you the same chart I showed you on Monday morning, with Monday's action added. The slight differences may matter. 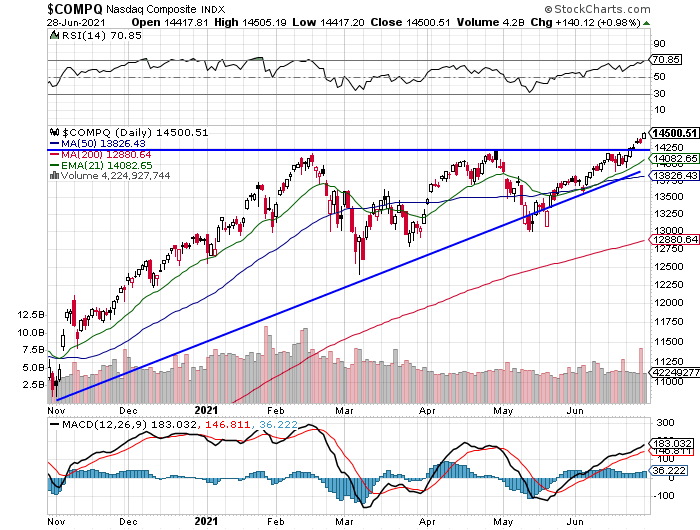 Here, readers will see the Nasdaq Composite extend its current attempt at an "ascending triangle" fueled breakout that we pointed to on Monday morning, as the trading volume of the last two Fridays truly stands out. Monday's nearly 1% move higher for the Nasdaq Composite (which amounted to 1.25% for the Nasdaq 100) was fueled by strength in the Communications Services ( (XLC) ) sector, up 1.13%, as well as the Technology sector ( (XLK) ), up 1.05%.

Communications were buoyed in turn by internet stocks led by Facebook's (FB) 4.1% surge after federal judge James Boasberg tossed out antitrust suits brought against the firm filed by the FTC as well as a majority of U.S. states. The tech sector was propped up primarily by semiconductor stocks, led by Nvidia (NVDA) and Marvell Technology (MRVL) as the Dow Jones U.S. Semiconductor Index gained 2.94% and the Philadelphia Semiconductor 2.52% for the session.

About that 1% move for the Nasdaq Composite that did leave the index at an all-time record closing high. It came on mixed breadth. Across the Nasdaq stock market, which of course, includes a lot of smaller stocks as well as technology and internet-based stocks, losers led winners by more than 200 issues even as advancing volume nearly doubled declining volume.

That might make some sense given that the S&P SmallCap 600 index gave up a full 1%, while the Russell 2000 half of that. Does this mean that the Nasdaq, which is where I have started to focus a little more, is now overbought? At the index level, the Composite sports an RSI (Relative Strength Index) of 70.85, and as the chart above shows, the index rarely tolerates RSI readings that are that high for very long. The Nasdaq 100, which is comprised of the Nasdaq stock market's 100 largest listed corporations sans the financials, now sports an RSI reading of 71.49 -- the highest reading of that type for that index since September 2020.

Also of note on Monday, was the obvious underperformance not just of the Dow Industrials and the Dow Transports (Dow theorists take note), but less obviously of the market's more cyclical sectors quite broadly. The five cyclical sectors took the bottom five places on Monday's equity performance tables, led lower by Energy ( (XLE) ) as crude prices softened ahead of this week's OPEC+ shindig, and Financials ( (XLF) ), which hiccupped in response to Monday's rally across the longer end of the Treasury yield curve as bond traders showed renewed interest in the U.S. 10-year note.

The Fed's stress tests for the large U.S. banks have come and gone. This year, unlike years gone by, with the pandemic doing far less damage (to the banks) than originally feared, the major players ended up sitting on mandated piles of cash reserves that had been set aside to cover expected loan losses.

This year, the stress tests were more about when and how much (rather than if) capital would be returned to shareholders. Morgan Stanley (MS) doubled its quarterly dividend, while announcing a share repurchase program that could run as high as $12 billion. Wells Fargo (WFC) also doubled its quarterly payout (though it remains well below early 2020 levels), while revealing an $18 billion buyback plan of their own. Goldman Sachs (GS) increased the dividend effective Oct. 1. JPMorgan Chase (JPM)  also upped its dividend, while stating an intention to continue on with a share repurchase authorization already in effect.

Then, there's Bank of America (BAC) , which announced a smallish dividend increase subject to board approval, and Citigroup (C) , which ended up being the only bank among the "big six" to sit on their corporate hands Monday. "Sitting on their hands" is accurate in describing what Citi did on Monday, but not in describing the firm's willingness to reward investors. Citigroup already pays shareholders $0.51 per quarter and has done so since mid-2019. The stock currently yields 2.9% making Citi the actual leaders among the big six in that category.

Seemingly every major financial newspaper carried stories on Monday discussing the Federal Reserve's monthly asset-purchasing program. In particular, the $40 billion in MBS purchases per month that make up one-third of the overall program that also includes the purchase of $80 billion worth of U.S. Treasury securities each and every month.

Suddenly, Boston Fed President Eric Rosengren warns of a potential "boom and bust" cycle in U.S. housing markets. Suddenly, Dallas Fed President Robert Kaplan sees as unintended consequences the possibility that $40 billion worth of monthly MBS purchases might be contributing to rising home prices. Suddenly, St. Louis Fed President James Bullard is leaning toward "the idea that maybe we don't need to be in mortgage-backed securities."

If only we didn't have to beat this crew over the head every single time they "accidentally" go too far. I mean gee whiz, for how many months have we been telling them in this column and on national television to stop buying mortgage-backed securities? They have already left an entire generation behind in terms of household formation.

I mean it is quite frustrating.

Dear members of the committee,

Just pay attention. Just read this column. You obviously have trouble realizing anything in any kind of timeline resembling precision when you start screwing up, and we in this column have always been willing to tell you. You don't even have to do your own work. We'll make it simple for you. If we say "Jump", you say "How high?" When we tell you how high, you say "Aye, aye sergeant", and you stinking do it. No excuses when you are told to act several months prior to having your "eureka" moment. This now decades-old cycle of being way ahead of you on nearly everything is getting exhausting. This didn't have to be difficult. Just pay attention.

Long time Sarge-fave Zscaler (ZS) sure has had a nice run. Let's take a look: 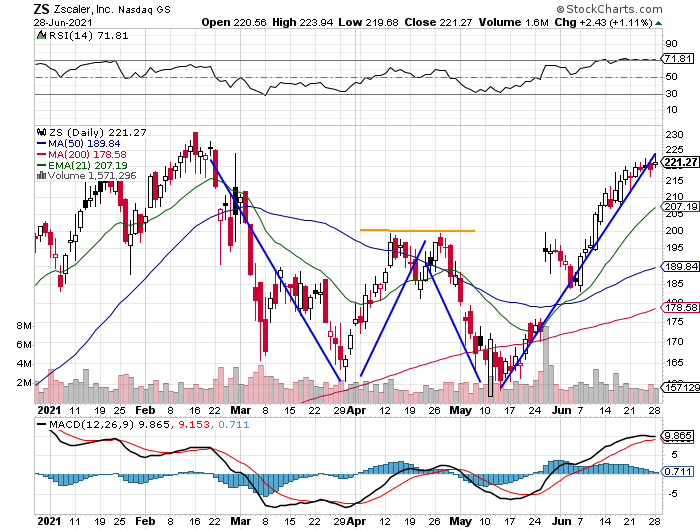 I see quite a few opposing forces here on this chart. Reasons to take profits? There are a few.

First off there is the gap created in late May between $175 and $185 that still has not filled. Second, the daily Moving Average Convergence Divergence (MACD) is looking a little toppy, with the 12-day exponential moving average (EMA) poised to cross below the 26-day EMA. That would be a short-term sell signal. Third, the RSI reading stands at 71.81.

That said, relative strength has sustained a reading of 70+ for almost three weeks now. Sustained strength or weakness of this kind can become entrenched, if not rejected after a brief encounter. We also see the double bottom, with a double pivot (which itself was a mini-double top) at an even $200.

I think that there could be some algorithmic resistance as the shares try to top the left side apex at the start of this double-bottom pattern, but I see no reason to change my current $240 price target.

Cybersecurity is paramount in 2021 and Zscaler is a leader. If I am wrong, we'll use the 21-day EMA (currently $207) and the 50-day SMA (currently $190) as a moving two-step panic. For, if these shares pass through both of those levels, then I think almost surely that late-May gap then fills.

(NVDA and WFC are holdings in Jim Cramer's Action Alerts PLUS member club. Want to be alerted before Jim Cramer buys or sells these stocks? Learn more now.)

Get an email alert each time I write an article for Real Money. Click the "+Follow" next to my byline to this article.
TAGS: ETFs | Federal Reserve | Futures | Indexes | Investing | Markets | MBS | Stocks | Trading | U.S. Equity