That is, if there is hard news. The coming week was always going to be one where both the agility of the news cycle and the endurance of individual attention spans would undergo a bit of duress. "Jobs Day" this Friday, is when the Bureau of Labor Statistics will release the data on the nation's employment situation as of February. That might as well be a mile away, as prior to week's end, the National People's Congress of China will convene for the group's second session in Beijing. It is at this 10-day session that the Chinese government will announce their target for GDP for 2019. External expectations for this target are in the 6% to 6.5% range. That would be a slowing of the 6.6% pace experienced in 2018.

In addition, the ECB will meet on policy this Thursday morning. No change in policy is thought to be imminent in Brussels, but the European economy is clearly softening and will likely at least require some gentle massaging to make its way out of the press conference.

My guess is that as a trader, you have already noticed global equities trading in the green since Sunday night. Not a rip roaring rally, mind you, just everyone quietly meandering in the same direction. A warning? I don't know.

According to a story that originated at the Wall Street Journal, and then quickly made the rounds, China and the United States are closing in on the completion of the long-awaited deal on trade. Obviously, nothing has been finalized. Nothing official has been made public, but the general feel is that a stage is being set so that something concrete could be agreed upon as Presidents Trump and Xi meet later this month.

Market participants first took notice that the trade discussion had evolved in a substantial way as President Trump allowed the March 2 deadline for increased tariffs on Chinese exports to the U.S. to be extended indefinitely. President Trump then asked the Chinese side to consider reducing Chinese tariffs on U.S. agricultural products in return. The wheels were then turning. Flash to Sunday afternoon.

The Chinese side, already known to have offered to reduce the trade gap with the U.S. over a number of years, is now thought to be finding ways to ease restrictions on foreign ownership, and tariffs across the auto industry. On top of that, apparently an offer to have China Petroleum & Chemical Corp. purchase $18 billion worth of liquefied natural gas from Cheniere Energy (LNG) is being thrown around -- in addition to the much-ballyhooed offer to ramp up soybean and other agricultural purchases.

The hitch, or hitches, remain how to agree upon enforcement of any such deal once reached -- though there has been headway made there, and not just on anti-competitive practices such as forced transfers of technology and partnering, but the protection of intellectual property rights. That last point is expected to come up for some kind of vote toward the end of this session of the National People's Congress, expected to close on March 15.

I must at this point ask, though a return to normalized trade with China is obviously a market positive, just how much of this rosy outlook is already discounted into the last sale? Macroeconomic data should improve for both the U.S. and China in response to a conclusive finish to this edition of the trade war. Perhaps some relief is also felt across ancillary economies as well. What we really need is a softening of the U.S. dollar versus the competition, and developments such as this should not hurt.

My guess is that in the short-term, a great deal is already priced in regarding China, with an assist from global central banks, or perhaps these past two months of P/L reflation might truly need those of us who try to interpret these events the other way around. The facts are the facts, and they remain short-term problematic. Markets will be bullied by keyword-reading algorithms short-term.

Tax reform has been the primary driver for earnings growth over the past year. We know that the easy comparisons that this reform created will go away -- starting right now. We're pretty sure that first-quarter GDP growth is going to be kind of tough. That print is shaping up to be something lower than 1%, maybe as low 0.5% on an annualized quarter-on-quarter basis. We never like to see GDP growth fall below the rate of inflation. Never. Even with subdued inflation at the consumer level, this, in my opinion, would create a drag on future growth in a deficit-driven economy.

I remain well diversified across asset classes. I remain at higher than the Wall Street average as far as cash is concerned, but far below where I had peaked. Currently that allocation stands at 31.4%, the lowest it has been in 14 months. Why lower? Well, we stand near the highs of a parabolic move, that's instinct. Why still high? Why did Evel Knievel wear a helmet? Still, a trend is your friend until it is your friend no more. Odds are that fighting a trend prior to overt evidence of imminent failure can cost traders a lot of dough. In other words, I am not yet cashing in my chips. Why? Lets go there.

Friends of The Trend 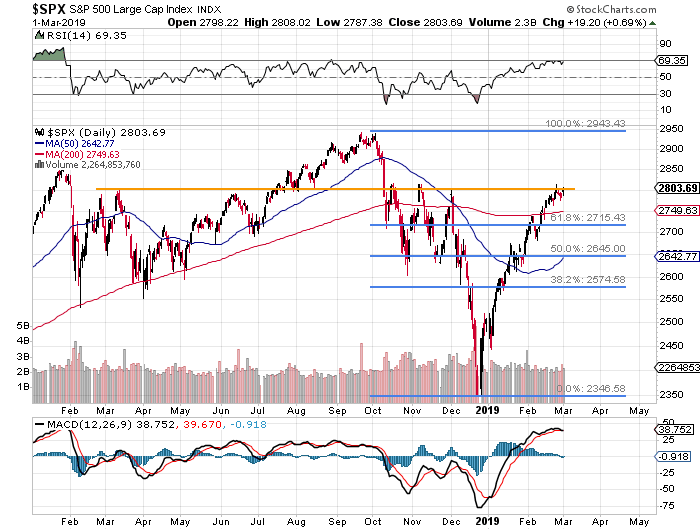 Equity markets would appear tired at first glance. Relative Strength has run just below 70 for about a month, the level most of us see as overbought. The daily Moving Average Convergence Divergence looks like the Cyclone (Coney Island Roller Coaster) at the precipice of its initial run lower.

But I see something else. I see that initial rejection at the 200-day SMA in early February followed by a successful test from the upside a week later. We had told you at that time that this sort of behavior was indeed necessary for a confirmation of a move higher, which is what transpired.

Now, I bring information opined on by Arthur Hill over at Stockcharts.com this weekend. We all watch the 50-day SMA versus the 200-day. That's where most folks will find their definitions for both "golden" and "death" crosses. Hill has been watching the 20-day SMA relative to the 200-day. Take a look at this.

In his research, using the SPDR S&P 500 ETF (SPY) as his vehicle, Hill finds that over the past 25 years, playing this crossover from the long side until the two lines recross has resulted in 11 winning positions and 6 losers. Though that winning percentage is nice, I find it not overwhelming. What I do find compelling is Hill's finding that the average gain for the winning positions resided above 28%, while the losers resulted in an average decline of less than 2%. That means that perhaps the chances of having one's face ripped off on this trade are not nearly as high as making some nice meal money.

Why am I relaying the work of another man to my readers? Simple, because I find it interesting... I wish I thought of it first... and quite simply, I am going to give this trade a try. I won't bet the farm. Just enough to make it fun. The recent run for equities does make for an uncertain future right here. Then again. March is typically one of the stronger months for our marketplace. Let the lion roar.

Get long some SPY in the wake of the not-yet-golden cross of the 20-day SMA above the 200-day SMA. The plan being to puke the position upon a recrossing.

Get an email alert each time I write an article for Real Money. Click the "+Follow" next to my byline to this article.
TAGS: Economic Data | Economy | Index Funds | Indexes | Investing | Politics | Stocks | Trading | World | U.S. Equity | Global Equity