Two days ago I said I thought the bonds had had enough. And the bonds said to me: Enough of what? We are going to keep on going. And so they have.

Here we see AMC had a massive move in early 2021 and again in the spring. These sorts of moves exhaust themselves on their own.

Now look at a long-term chart of the yield on the two-year Treasury. It has screamed higher and seemingly has taken on a life of its own. Sure this is related to the Fed and its hiking cycle, but a chart is a chart and it reflects human nature. In this case someone -- or several someones -- can't seem to get enough of them and they have gone parabolic.

About the best news I can offer is that the Daily Sentiment Index (DSI) did finally fall to single digits on Thursday. It chimed in at 9 for bonds and 9 for Notes. Quite frankly, I'm surprised it is not down to a lower reading, but I don't make the rules. A single-digit reading has typically led to a rally.

Elsewhere, the stock market once again tried to cross that downtrend line and failed. The good news is that it hasn't really backed off from there, it just mills around the line.

The good news is that breadth wasn't weak enough to turn the McClellan Summation Index back down. Not yet. It would need one more negative breadth day and since we haven't had a green Friday in weeks, we'll have to see if that pattern changes.

Yesterday, I noted that the Investors Intelligence bulls had ticked up to 31%. It's not much, but it showed a change in sentiment that we hadn't seen in the prior four weeks. On Thursday we discover that the National Association of Active Investment Managers have raised their exposure to 43. It is the highest reading since it started to come down in August. My takeaway is the same: folks are bearish but can easily be convinced that we should rally. 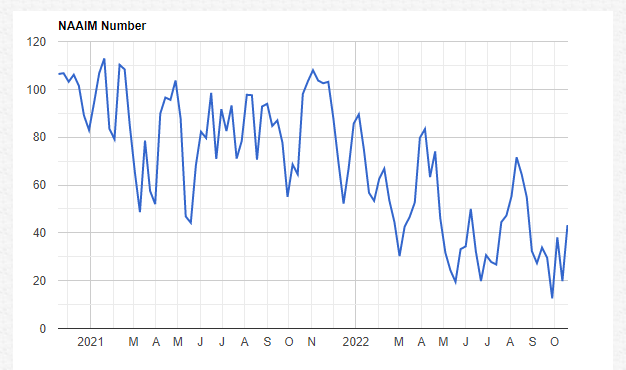 Finally I should address the VIX. I can't say why the VIX was red on Thursday. Nor can I say when it has pushed lower for nearly two weeks now. But I can report that the 21-day moving average for the put/call ratio of the VIX has not budged one iota since I last wrote about it in late July/early August. 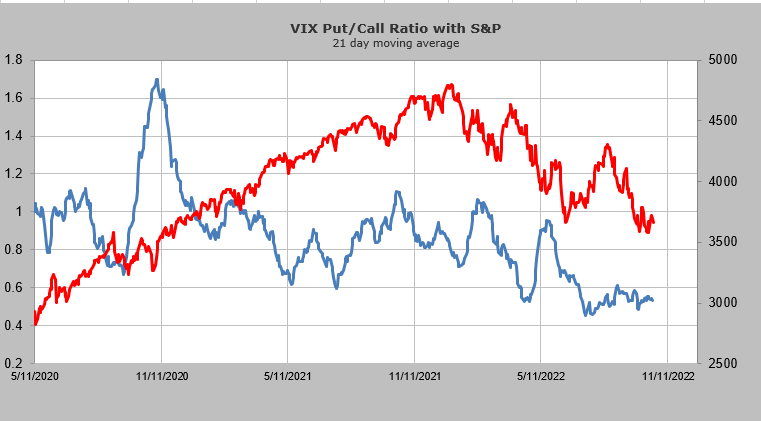 Back then I said I thought it portended a move up in volatility since we want to go with the folks who trade options there (they tend to be pros). Typically they start to load up on puts as the market is making lows, with the thinking that the VIX should fall. When they load up on puts this ratio rises. You can see that hasn't happened yet.

Get an email alert each time I write an article for Real Money. Click the "+Follow" next to my byline to this article.
TAGS: Investing | Stocks | Technical Analysis | Bonds