For his "Executive Decision" segment of Mad Money Monday night, Jim Cramer sat down with Chris Rondeau, CEO of Planet Fitness (PLNT) , the fitness chain with over 2,000 locations and 7.9% same-store sales growth.

Rondeau said that Planet Fitness is a "no intimidation zone," and their members come in all shapes and sizes and range in age from 18 to 80 years old.

When asked about their retail-adjacent locations, Rondeau said that retailers love having Planet Fitness in their shopping centers because most workouts occur during off-peak times and their members often shop at nearby stores.

Finally, Rondeau recounted his own story at Planet Fitness, which started as a front desk clerk and has now spanned 27 years. He said he still works in their centers and gets new ideas for making it better every time he does. Let's check out the charts of PLNT to see if we get any new ideas.

In the daily bar chart of PLNT, below, we can see that prices rallied in the first half of 2019 and corrected from early August to the early part of October. Prices have been firming the past three months and buy signals have been generated.

The trading volume increased in early November when prices gapped higher and the daily On-Balance-Volume (OBV) line has been rising from early October telling us that buyers of PLNT have been more aggressive. The trend-following Moving Average Convergence Divergence (MACD) oscillator has been in take profits sell mode in December but the two moving averages that make up this indicator have narrowed and could soon cross to the upside for an outright go long signal.

In the weekly bar chart of PLNT, we can get a longer-term perspective on the stock's performance. Prices rose four-fold from 2017 to the middle of 2019.

The weekly OBV line has pushed up to a new high the past two months hopefully foreshadowing prices making new highs in the weeks ahead. The MACD oscillator moved above the zero line in late December for a fresh outright go long signal.

In this first Point and Figure chart of PLNT, below, we used daily price data to construct the chart. The software on this time frame is projecting an upside price target of $79 -- close to a new high and a breakout. 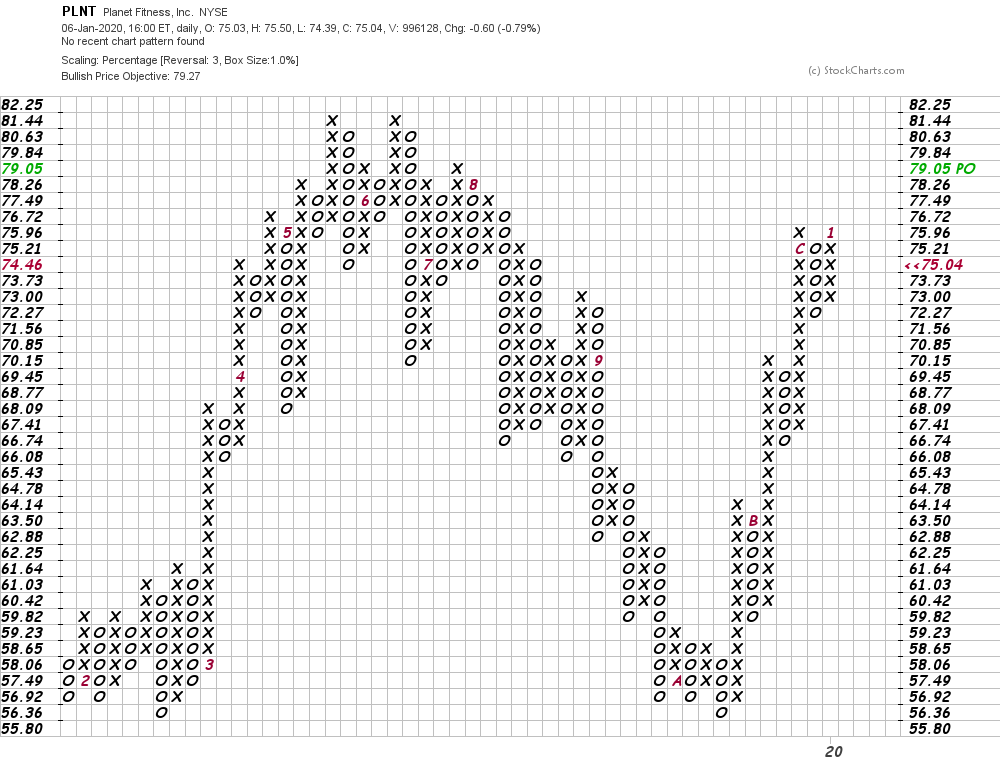 In this second Point and Figure chart of PLNT, below, we used weekly price data to make the chart. Here a potential longer-term price target of $115 is being projected.

Bottom-line strategy: Traders could go long PLNT at current levels and on strength above $80. Risk a close below $70 for now looking for gains to the $115 area in the months ahead.

Get an email alert each time I write an article for Real Money. Click the "+Follow" next to my byline to this article.
TAGS: Investing | Stocks | Technical Analysis | Health Care Equipment & Services | Mad Money | Executive Interview

Pay Attention to This Nasdaq Number

As we move toward complacency, the Daily Sentiment Index is up to 93 -- and you know what readings over 90 mean.