The major equity indexes closed mixed on Thursday. However, internals were positive on the New York Stock Exchange and Nasdaq as trading volumes rose on both.

The close found all the index charts remaining in near-term bullish trends as one index managed to close above resistance. Market internals remain bullish as well. However, the 1-day McClellan Overbought/Oversold Oscillators remain overbought while forward 12-month S&P 500 consensus earnings estimates via Bloomberg continue to dwindle, thus causing the valuation spread to widen.

In our view, the near-term bullish trends should continue to be honored. However, as the markets were rather silly on the downside at the market lows as we were becoming more optimistic, we think they may be a bit ahead of themselves currently as money has flooded back in after the lows. As such, we are less inclined to chase price in general while awaiting more opportune buy levels.

The major equity indexes closed mixed Thursday with positive internals on the NYSE and Nasdaq on higher volume.

All closed near their intraday lows as the S&P 500, Nasdaq Composite and Nasdaq 100 posted losses as the rest gained.

The only technical event of note was the Dow Jones Transportation Average closing above its near-term resistance. 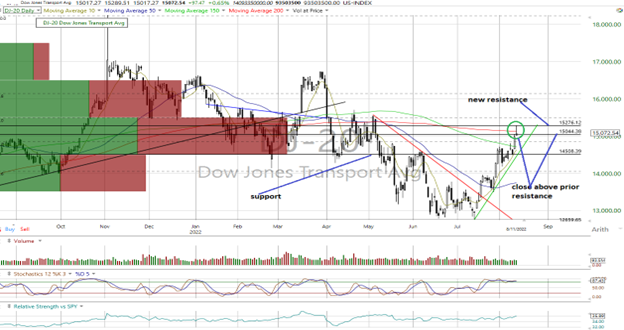 As such, all the index charts remain in near-term bullish trends that, in our opinion, should continue to be respected.

Market breadth continues to strengthen as well, with the cumulative advance/decline lines for the All Exchange, NYSE and Nasdaq bullish and above their 50-day moving averages.

Stochastic levels remain overbought but have yet to generate bearish crossover signals.

The McClellan Overbought/Oversold Oscillators remain overbought and a bit cautionary (All Exchange: +72.63 NYSE: +79.91 Nasdaq: +66.8). We believe they suggest price sensitivity may now be prudent.

The percentage of S&P 500 issues trading above their 50-day moving averages (contrarian indicator) moved further into bearish territory at 86%. As a point of reference, it was around 13% at the June market lows.

The detrended Rydex Ratio (contrarian indicator) ticked up to -0.37 and is neutral as well.

This week's AAII Bear/Bull Ratio (contrarian indicator) moderated further as the crowd became a bit less fearful at 1.38. Thus, it is now "bullish" versus its prior "very bullish" implications.

The forward 12-month consensus earnings estimate from Bloomberg for the S&P 500 continues to slip, dropping to $233.04 as analysts continued cutting their forecasts. As such, the valuation spread widened, with the S&P 500 forward multiple at 18.1 and at a slight premium to the "rule of 20" ballpark fair value at 17.1.

As investors who previously were fearful rush in to participate in the current rally, the near-term bullish chart trends should not be ignored. However, we are becoming more reticent about chasing price at current levels given some of the data and valuation issues.

Get an email alert each time I write an article for Real Money. Click the "+Follow" next to my byline to this article.
TAGS: Interest Rates | Investing | Stocks | Technical Analysis | Treasury Bonds | Real Money | Indexes