Despite popular belief, Kotagiri said Magna is actually agnostic when it comes to propulsion systems. He said 70% to 80% of the parts and systems they manufacture appear in both combustion engines and electric vehicles.

When asked about EV, Kotagiri said they're very excited about their partnerships with Fisker (FSR) . He said they've been partnered with the electric vehicle maker since the early stages, and Fisker has benefited from their vast knowledge of systems and integrations. Magna currently works with dozens of OEM partners and there's nothing preventing them from working with additional partners in the future.

The last time we looked at MGA was way back in August 2018. Our forecast then was: "MGA saw its zenith in May and is still in a weak technical position. A test and break of the February/March lows in the $52 area is likely. The Point and Figure target is $48."

The On-Balance-Volume (OBV) line has been in an uptrend from the middle of September telling me that buyers of MGA have been more aggressive. The positive OBV line helps to confirm the price gains. The Moving Average Convergence Divergence (MACD) oscillator is positive but the two moving averages of this indicator are close together.

In the weekly Japanese candlestick chart of MGA, below, we went back further in time to show how our August 2018 forecast worked out. Prices were weak until the early 2020 low. Now prices are in an uptrend above the rising 40-week moving average line.

The weekly OBV line shows strength from August. The MACD oscillator has been in a bullish alignment above the zero line for several months.

In this daily Point and Figure chart of MGA, below, we can see a potential upside price target in the $104 area. 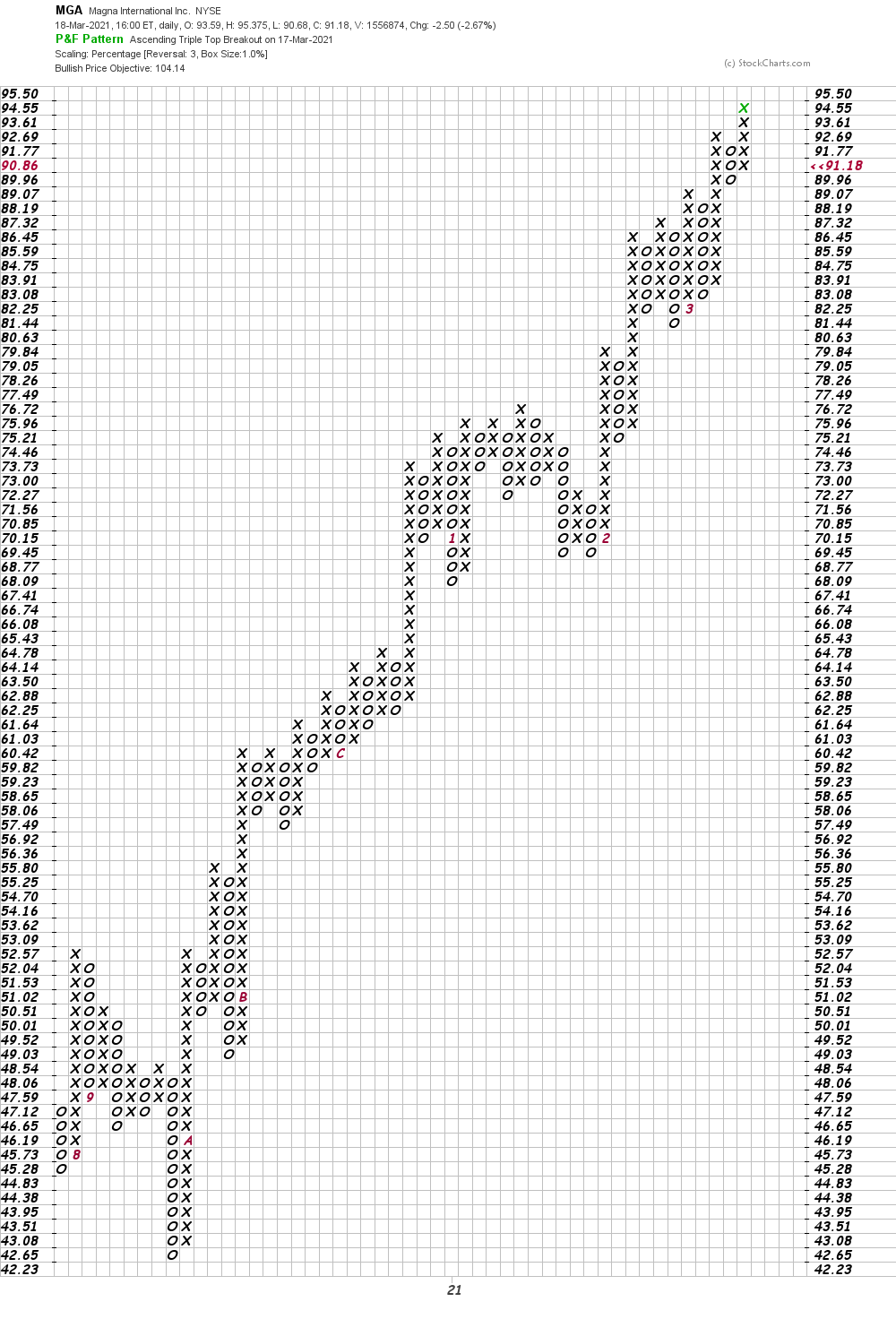 In this weekly Point and Figure chart of MGA, below, we see a tentative price objective in the $144 area.

Bottom-line strategy: Aggressive traders could go long MGA on a dip just below $90 (if available) and then risk a close below $80. The $100-$104 area is the first price target followed by the $144 area.

Get an email alert each time I write an article for Real Money. Click the "+Follow" next to my byline to this article.
TAGS: Investing | Stocks | Technical Analysis | Automobile Components | Automotive | Mad Money | Executive Interview | Electric Vehicles