Macy's (M)  has more than just product-line execution problems that eroded earnings results to deal with. It also has macro fears outlined by management in its earnings report out Wednesday.

The latter has much more meaning for broader sector investors.

Shares of Macy's moved rapidly to the downside Wednesday, marking the biggest drop for the stock since early January, when a prior pared profit forecast prompted an over 20% drop in share value throughout the month. At present, the stock is operating near its lowest level this decade.

While the situation at present is somewhat similar given the earnings miss and gloomy guidance, the added element comes in the form of macroeconomic factors related to trade that appear to be rippling through the entire retail sector.

"While consumer spending remains healthy, there is significant noise in the macroeconomy: tariffs, currency fluctuations, decline in international tourism, to name a few," CEO Jeff Gennette explained. "As it relates specifically to tariffs, we're currently assessing the details that the U.S. Trade Representatives Office released yesterday related to the fourth tranche of tariffs on goods imported from China."

"We know from the earlier tranche in tariffs though that today's customer doesn't have much appetite for price increases," he added.

That outlook makes the case that the price paid for tariffs will be difficult to pass onto consumers, meaning a further squeeze on margins that have proved a problematic aspect of quarterly prints for companies like Macy's.

In the end, at a certain level many companies will need to raise prices, which will temper demand and put further burden on consumers that can ripple through to numerous tangential sectors.

"I think that 10% is manageable in the short and long term," Gennette told analysts. "I think when it goes to 25%, you're dealing with a whole lot of series of dynamics that I would not say we wouldn't have to raise prices."

To be sure, the retail sector did get a temporary reprieve earlier this week, which provided a small lift to the sector.

"Certain products are being removed from the tariff list based on health, safety, national security and other factors and will not face additional tariffs of 10 percent," the USTR said on Tuesday. Among the items delayed for new tariffs until Dec. 15  are "certain items of footwear and clothing."

Still, the uncertainty and the need for mitigation by major retailers as policy is whipsawed on a seemingly weekly basis is not helping investor sentiment. Further, the the sector continues to fail in spite of attempted accommodation is not ideal.

"Uncertainty for U.S. businesses continues, and tariffs taking effect September 1 will result in higher costs for American families and slow the U.S. economy," David French, senior vice president of government relations at the National Retail Federation said. "During this delay period, we urge the administration to develop an effective strategy to address China's unfair trade practices by working with our allies instead of using unilateral tariffs that cost American jobs and hurt consumers."

Without a firm reconsideration as sector representatives advise, the bearish sentiment is not likely to shift, especially as guidance figures across the sector get reined in and only companies with appropriate scale can contend with coming trade tamps.

Essentially, if you weren't already leveraging global reach to move supply chains out of China into countries like Vietnam and deaden the impact of the trade war, you are too late. Unfortunately, it would appear too many retailers that supply stores have not made such moves. 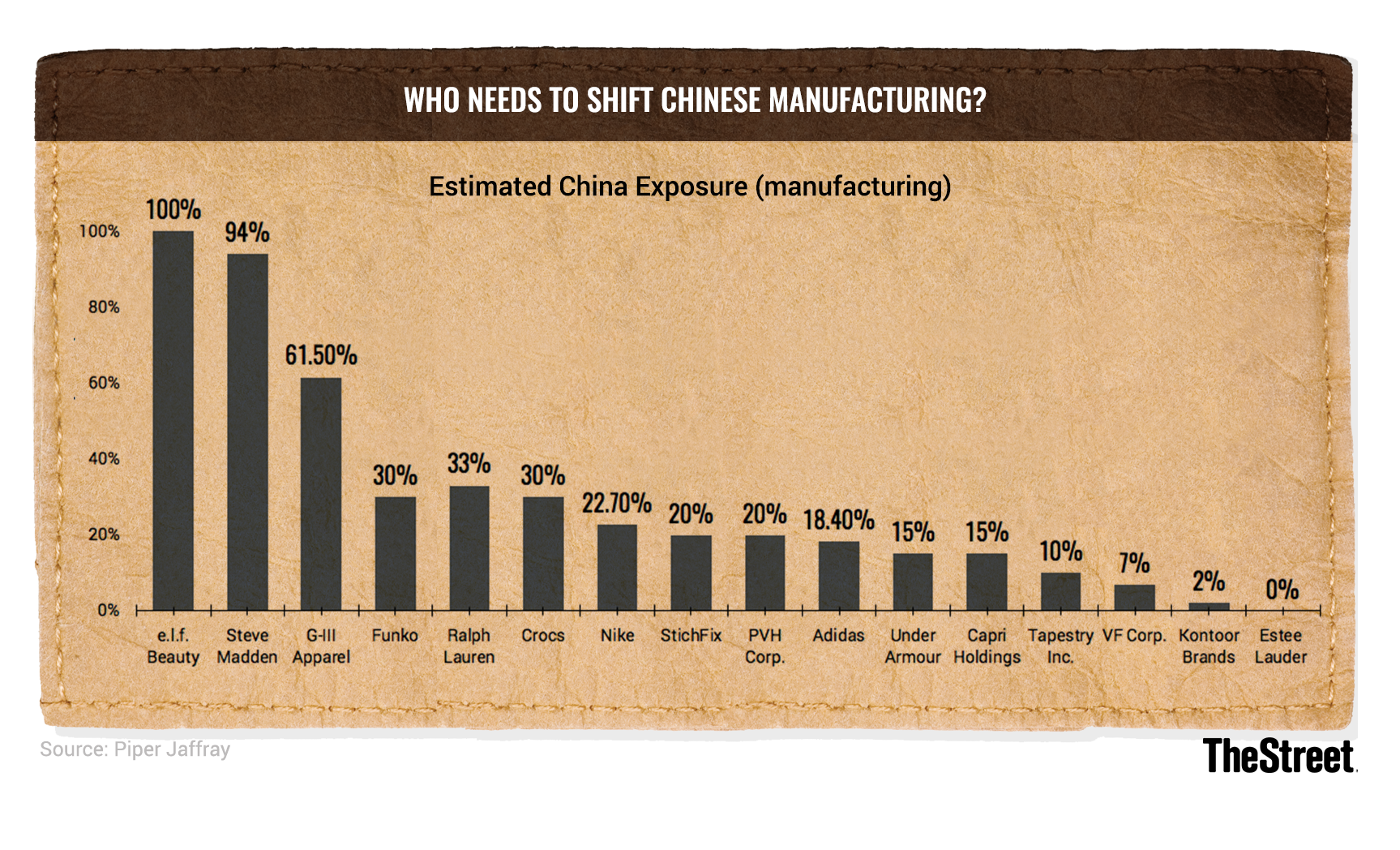 Consumers and shareholders throughout the sector may be the ones footing the bill for the lack of foresight on behalf of these companies for the foreseeable future.

For just how bad it can get for Macy's specifically, the charts aren't very promising. For more on the technical forecasts ahead, click here.

For more on stocks that may help protect your portfolio, Jim Cramer is outlining his picks on the Action Alerts PLUS monthly members call Wednesday.

Get an email alert each time I write an article for Real Money. Click the "+Follow" next to my byline to this article.
TAGS: Regulation | Dividends | Investing | Stocks | Bearish Bet | Apparel | Consumer | Retail | China | Stock of the Day