In his first Executive Decision segment of "Mad Money" Tuesday,  Jim Cramer spoke with Jeff Gennette, chairman and CEO of Macy's Inc. (M) , the iconic department store chain that has been reinventing itself since the pandemic began.

Gennette said Macy's has been listening to its customers and transforming itself accordingly. It has added loyalty programs, personalization and new product categories to its offerings as well as new payment and delivery options.

When it comes to Macy's real estate, Gennette admitted that malls have been under pressure, but he said Macy's stores are in the best malls and those that are not closing.

Let's check out the charts of M to see if investors will have anything to celebrate.

In this daily bar chart of M, below, we can see that prices behaved weaker than the broad market as M declined from early January to early April before mounting a tepid recovery into early June. M traded sideways into early August and then made two weak upside attempts. As the broad market averages turned lower this month M has moved below the 50-day moving average line. As one example of the stock's weakness, the slope of the 200-day moving average line has been negative the past 12 months.
Trading volume increased from March to early June but has since declined, suggesting that investors have headed for the exits again. The On-Balance-Volume (OBV) line moved up from March to early June, telling us there was aggressive buying, but then the line turned sideways. The trend-following Moving Average Convergence Divergence (MACD) oscillator has been hugging the zero line the past three months, which tells us there is little or no strength behind the trading in M.

In this weekly bar chart of M, below, we see a long-term bearish picture. Prices have been below the declining 40-week moving average line since late 2018. Trading volume has been heavier this year versus prior years, and because prices have not responded on the upside the interpretation is that this volume has been liquidation or selling. The weekly OBV line declined into late July and the MACD oscillator remains below the zero line. Not a pretty picture at all.

In this daily Point and Figure chart of M, below, we can see that prices are still pointed down even after reaching a downside price target around $7. The volume-by-price bars on the left scale do not show much potential chart support, which could mean further declines for shares of M. 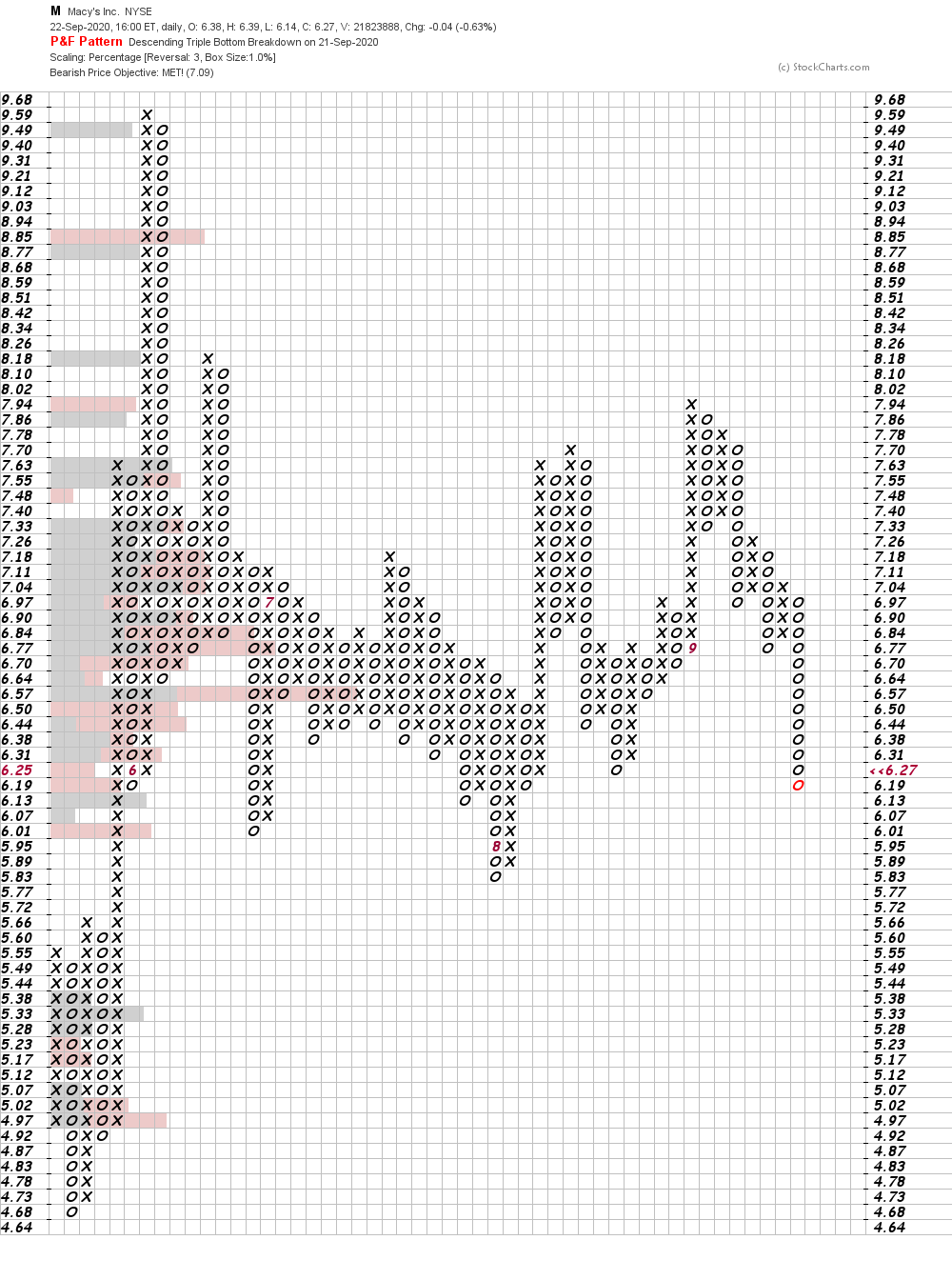 Bottom line strategy: Macy's may be working very hard on reinventing itself, but unfortunately I do not find that work ethic has translated itself into strong charts just yet.
Get an email alert each time I write an article for Real Money. Click the "+Follow" next to my byline to this article.
TAGS: Investing | Stocks | Technical Analysis | Consumer | Retail | Mad Money | Executive Interview | Real Money

Here's How to Play Tesla When Great Isn't Good Enough

The series of lower highs since last November and the series of higher lows since May imply the coming of an explosive move in TSLA.