Since the Bristol-Myers Squibb  (BMY) and Celgene (CELG) deal put a spotlight on big biopharma deals earlier this year investors have been eyeing what big deals could be next. Looking at the staggering spend by big players in the space, there was much more than just one right answer. 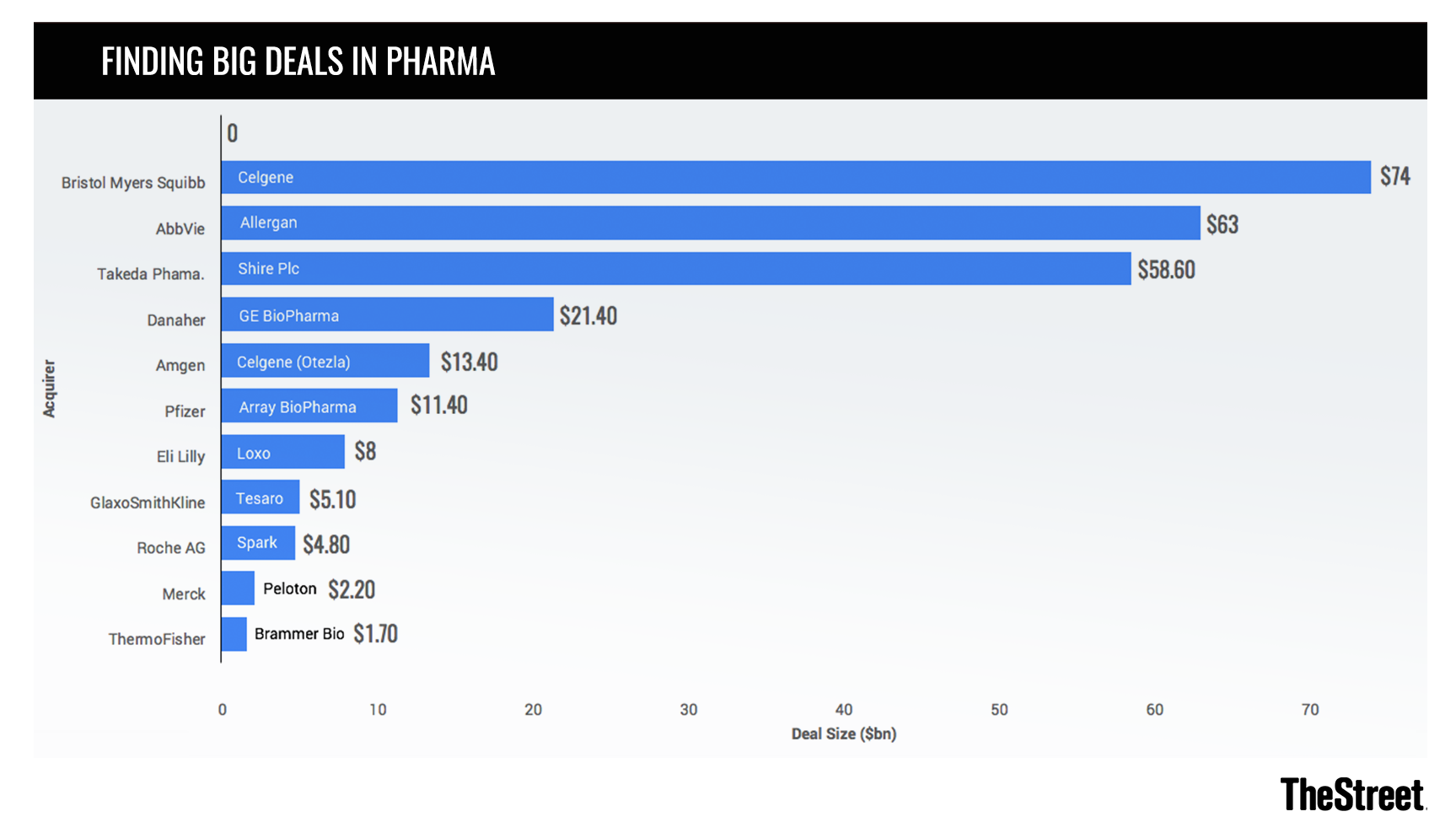 "Is biotech consolidation on the way? We are very curious to see if this marks the beginning," Cantor Fitzgerald analyst Alethia Young wrote in January. "We also wonder what this means for other large pharma including Amgen (AMGN) and their appetite to do larger deals."

With Amgen's poaching of Celgene psoriasis treatment Otezla for $13 billion on Monday, that suspicion has finally been confirmed and come full circle.

Analysts have also been encouraged by the ability of drugmakers to pursue such options amidst anti-competition concerns, which is likely pushing premiums for buyouts upward.

"[The deal] values Otezla at more than 6.7x 2019 expected full-year sales, which is higher than we would have expected the product to sell for," Leerink Partners analyst analyst Geoffrey Porges told clients. "The [Otezla] transaction does not seem outrageously expensive to us, but the presence of other bidders is likely to have driven Amgen's final price toward the upper end of fair value ranges."

Overall, Porges saw the deal valuation as a slight negative for Amgen, but added that in the long term if patent protection holds, the deal is ultimately appropriate.

In fact, some analysts have noted that the environment for drug offloads in M&A style transactions is likely to stay on track as competition concerns flare and companies may continue to transact profitable drugs for portfolio protection.

"The process was competitive so the price was going up a bit," Jefferies analyst Michael Yee acknowledged. "The benefits for AMGN are excellent anyway...this is all short-term stuff - the long-term story just got better due to Otezla."

He added that he would buy any dip in shares on Monday as he continues to be encouraged by the rationale behind big M&A like this deal.

Porges added that the structure of deals such as the Amgen and Celgene agreement are likely to avoid regulatory pushback despite some viable concerns.

"As an independent observer we would expect the [Amgen] combination to be more truly anti-competitive than the [Bristol-Myers combination], but this does not appear to have been the FTC's view," he concluded, noting that there was likely some consultation ahead of the announcement.

"In pharma, as in other industries, competition for the most compelling and innovative assets is likely to remain fierce and spur motivations for merger deals," a recent McKinsey report states. "Strategic acquirers are likely to continue to be aggressive about bringing in new innovations-through early licensing and partnership agreements, for instance-as a path to continued growth."

"The premium on innovation is big, and those who place the most bets are rewarded," the report adds.

With premiums for takeover bids being pressured upward, this is all the better for those invested in acquired companies.


For more pointed analysis, the largest deals have come in acquiring oncology and gene therapy pipelines, which experts have suggested is a trend to follow for investors.

For prospective targets in the hot pharma space, Sarepta (SRPT) , Sage Therapeutics (SAGE) , Clovis Oncology (CLVS) , Immunomedics (IMMU) , and Incyte Corporation (INCY) have all been floated as top targets at attractive valuations by Wall Street analysts in 2019. Additionally, Alexion Therapeutics (ALXN) could be on the block after much noise last week surrounding Amgen's potential interest in a takeover.

With still strong cash piles at Pfizer (PFE) and Merck (MRK) , and even to a lesser extent at Biogen (BIIB) , and the forecasts for continued appetite in acquisitions, the space could be an attractive sector to eye for more speculative investors as the year comes to a close.

(Amgen is a holding in Jim Cramer's Action Alerts PLUS member club. Want to be alerted before Jim Cramer buys or sells AMGN? Learn more now.)

Get an email alert each time I write an article for Real Money. Click the "+Follow" next to my byline to this article.
TAGS: Mergers and Acquisitions | Regulation | Movers and Shakers | Rumor Mill | Takeover Possibility | Investing | Stocks | Biotechnology | Pharmaceuticals | Stock of the Day