Zimmer said Lyft had a strong second quarter with solid fundamentals. He said demand is strong and is coming back as more people get vaccinated and travel ramps up. Lyft remains focused on consumer transportation, he added, which gives it an advantage over the competition.

Zimmer also commented on a recent California appellate court decision that struck down Proposition 22, a voter-approved state ballot measure that exempted Lyft and other ride-sharing services from treating their drivers as employees. He said remained confident that Prop. 22 ultimately will be upheld. Only 2% of Lyft drivers rise to full-time employment thresholds of over 40 hours per week, he said.

Let's check out the charts. In this daily bar chart of LYFT, below, we can see what looks like a large topping formation going back to December. Use your imagination to see a left shoulder in December and January followed by a head in March and April and a right shoulder in early July. Prices have broken down below the rising 200-day moving average line as well as a neckline drawn from the January low through the May low to August. The On-Balance-Volume (OBV) line has been weak since it peaked in March and April, telling us that sellers of LYFT have been more aggressive. The Moving Average Convergence Divergence (MACD) oscillator is below the zero line and pointed lower -- in a word, bearish.

In this weekly Japanese candlestick chart of LYFT, below, we see a mostly bearish picture. Prices have closed below the cresting 40-week moving average line. The weekly OBV line has been stalled/toppy since April and signals a shift toward more aggressive selling. The MACD oscillator is pointed down and close to the zero line.

In this daily Point and Figure chart of LYFT, below, we can see that prices are pointed down with a slightly lower price target. 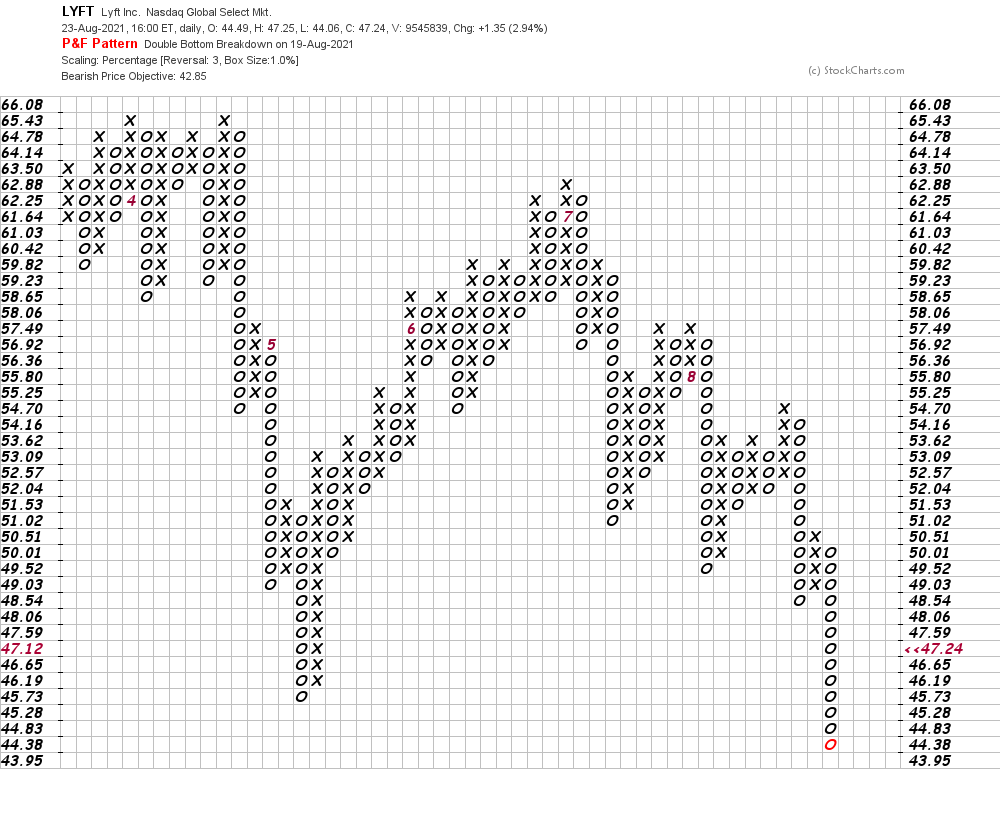 In this weekly Point and Figure chart of LYFT, below, we see a price target of around $39.

Bottom line strategy: Shares of LYFT look destined to break their late January lows and fall further in the weeks ahead. This potential top pattern projects a tentative price target in the $25-$20 area, taking the height of the pattern and projecting it lower. Avoid the long side.

Get an email alert each time I write an article for Real Money. Click the "+Follow" next to my byline to this article.
TAGS: Litigation | Earnings | Investing | Stocks | Technical Analysis | Consumer | Transportation | Mad Money | Executive Interview | Real Money