I'll admit the first thing that went through my mind when I read Lyft (LYFT) was moving the date of its lockup release forward to Aug. 19, I visualized insiders rushing to sell like shoppers through the doors on an old-school Black Friday.

I remember when people would line up hours before the pre-dawn open ready to fight through the crowds to get a Tickle-Me-Elmo or Cabbage Patch Kid. All right, maybe those sales happened before we saw the insane post-midnight openings like we have now, but the idea is still there. Heavy demand meet limited supply, but in the case of Lyft, it would be the demand to sell, but likely a limited number of buyers around the current valuation.

That was my gut reaction, an emotional one, but driven with some logic and experience. Then, I read the report about the 257.6 million shares potentially eligible for sale, roughly 136% of the current float, and I wasn't as negative. Don't get me wrong, I still believe there will be more supply than demand, but the time frame wasn't a huge change.

Sept. 24 waited as the initial lockup release. This pushes up the release by five weeks. The only impact here is on traders, those planning on flipping the stock. Institutional or long-term investors hold little concern for five weeks or day-to-day action unless we see a fundamental shift in the underlying company.

One other impact that is possible is those who hedge the lockup release because the release itself wasn't an unknown catalyst. The original date had disclosed that previously. Traders or investors looking to jump out in front of the release may have purchased option protection. In doing so, they would have been buying puts or selling calls at an expiration later than August or September, so the only impact is they bought more time than they needed.

Overall, Wednesday's results after the bell were encouraging. Encouraging enough to support an $18 billion valuation is another question. The challenge with companies creating a new category in business is valuation. Ride-sharing within the transportation sector is new unless you want to count thumbing a ride as a "business." So, with Lyft, as well as Uber (UBER) , don't expect the volatility and conflict of views to subside anytime soon.

Active riders increased 41% to 21.8 million while the average revenue per action rider surged 22% to $39.77. It's that sector metric that is the most compelling. 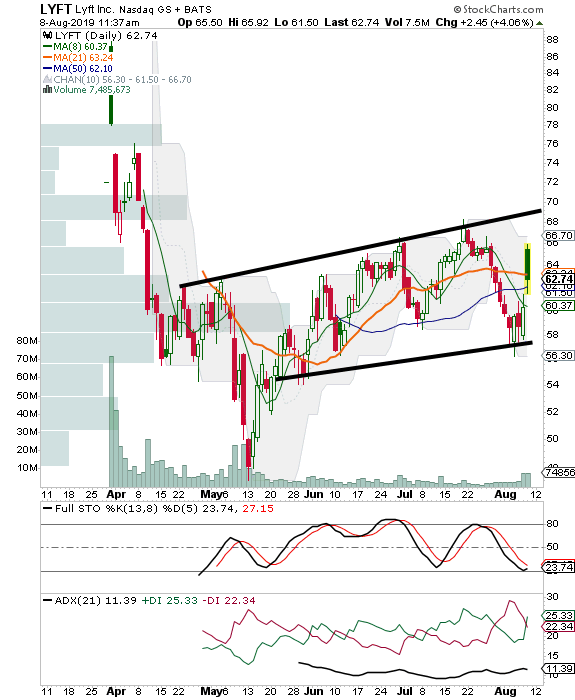 Lyft is regaining pricing power, so one would naturally expect to see the same with Uber Thursday evening. Revenue rose 72% year-over-year reaching $867 million, well above estimates of $809 million. Although net losses ballooned to $644.2 million, roughly half of that was stock-based compensation. Adjusted net loss of $197.3 million is actually very close to the $178.9 million of a year earlier.

Management went on to raise third-quarter revenue guidance 7-8% above current estimates and full-year's higher as well. Unfortunately, there will likely be a weight around the neck of Lyft until we get close to or through Aug 19. The shares should hold the $58 support level on a fade, but that's the level to watch if you are long or looking long.

Ironically, secondary indicators like the Full Stochastics and ADX are close to buy triggers. While it is impossible to advocate in front of a huge lockup release, any substantial decline into the low-to-mid $50s will be worth considering any time after Aug. 15 as most of the impact should be priced in by that point.

Get an email alert each time I write an article for Real Money. Click the "+Follow" next to my byline to this article.
TAGS: Earnings | Investing | Stocks | Technical Analysis | Trading | U.S. Equity | Stock of the Day