When we last looked at Lululemon Athletica (LULU) on Feb. 25 we wrote that, "Sometimes charts can turn on a dime, so to speak, but more often trends in force tend to remain in force. For now, the charts of LULU are pointed lower. The September lows will be key."

The shares weakened into March and broke the September lows. On March 19, TheStreet's Quant Ratings service downgraded LULU to "hold" so another look seems in order.

The On-Balance-Volume (OBV) line peaked in early September and has slowly declined telling me that sellers of LULU have been more aggressive. The Moving Average Convergence Divergence (MACD) oscillator has been below the zero line from early in January.

In the weekly candlestick chart of LULU, below, we can see a mostly bearish picture. Prices are in an intermediate-term downtrend and trading below the cresting 40-week moving average line.

The weekly OBV line looks like it made its high in August. The MACD oscillator is poised to break the zero line for an outright sell signal.

In this daily Point and Figure chart of LULU, below, we can see that prices met a downside price target of $309. 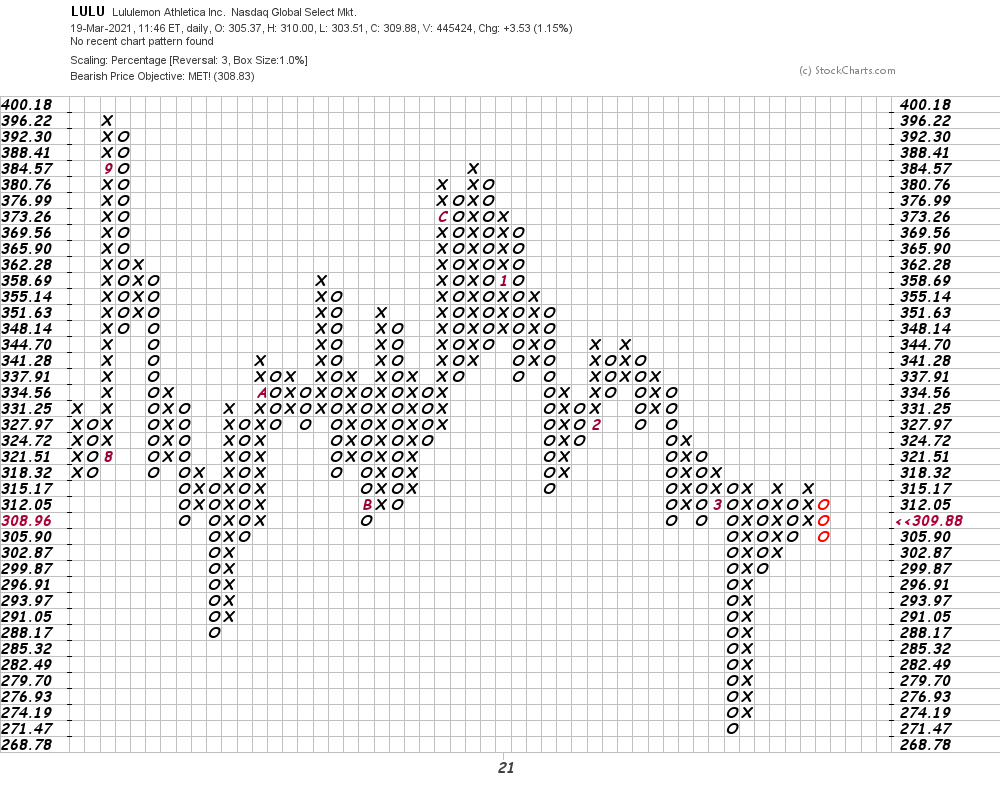 In this weekly Point and Figure chart of LULU, below, we used weekly close-only price data and added a five-box reversal filter. Here the software projects the $98 area as a possible downside price target.

Bottom-line strategy: A quantitative downgrade to "hold" does not seem like the end of the world but the charts of LULU are looking more bearish than before. Stand aside and let's see how this plays out. A potential target of $98 has my attention.

Get an email alert each time I write an article for Real Money. Click the "+Follow" next to my byline to this article.
TAGS: Investing | Stocks | Technical Analysis | Apparel | Quant Ratings