During Wednesday's Mad Money program Jim Cramer told viewers that he would be a buyer of Lululemon Athletica (LULU) . In our last review of LULU on Sept. 4 we wrote that, "This week's candle pattern -- a shooting star -- probably marks a high for LULU. Candlestick reversals can mean a change in trend from up to sideways and not just up to down. This might be the case with LULU as most of the indicators are still positive. Prices are correcting but don't get too bearish."

Well, the shares made a new low for the move down Thursday morning so let's check on things again.

In the updated daily bar chart of LULU, below, we can see that the shares have reached the approximate midpoint of a band of support from $320 to $280 from June and July. Weakness below the midpoint typically can lead to a break of the entire support zone. Prices are below the 50-day moving average line and the average is poised to turn lower. The 200-day moving average line is still rising and interests closer to $260.

The On-Balance-Volume (OBV) line has turned lower from late August and tells me that sellers of LULU have become more aggressive. The Moving Average Convergence Divergence (MACD) oscillator has crossed below the zero line for an outright sell signal.

In the weekly candlestick chart of LULU, below, we can see the start of weakness. Prices made a large upper shadow two weeks ago telling us that traders rejected those prices. The large red or bearish candle last week was confirmation of the reversal. This week's candle is not done yet but it could become a harami if the stock does not close below last week's low. The slope of the 40-week moving average line is still positive but this is a lagging indicator.
The weekly OBV line shows a little weakness and the MACD oscillator has crossed to the downside for a take profits sell signal.

In this daily Point and Figure chart of LULU, below, we can see a potential downside price target in the $271 area. This could mean that support in the $320-$280 area is broken. 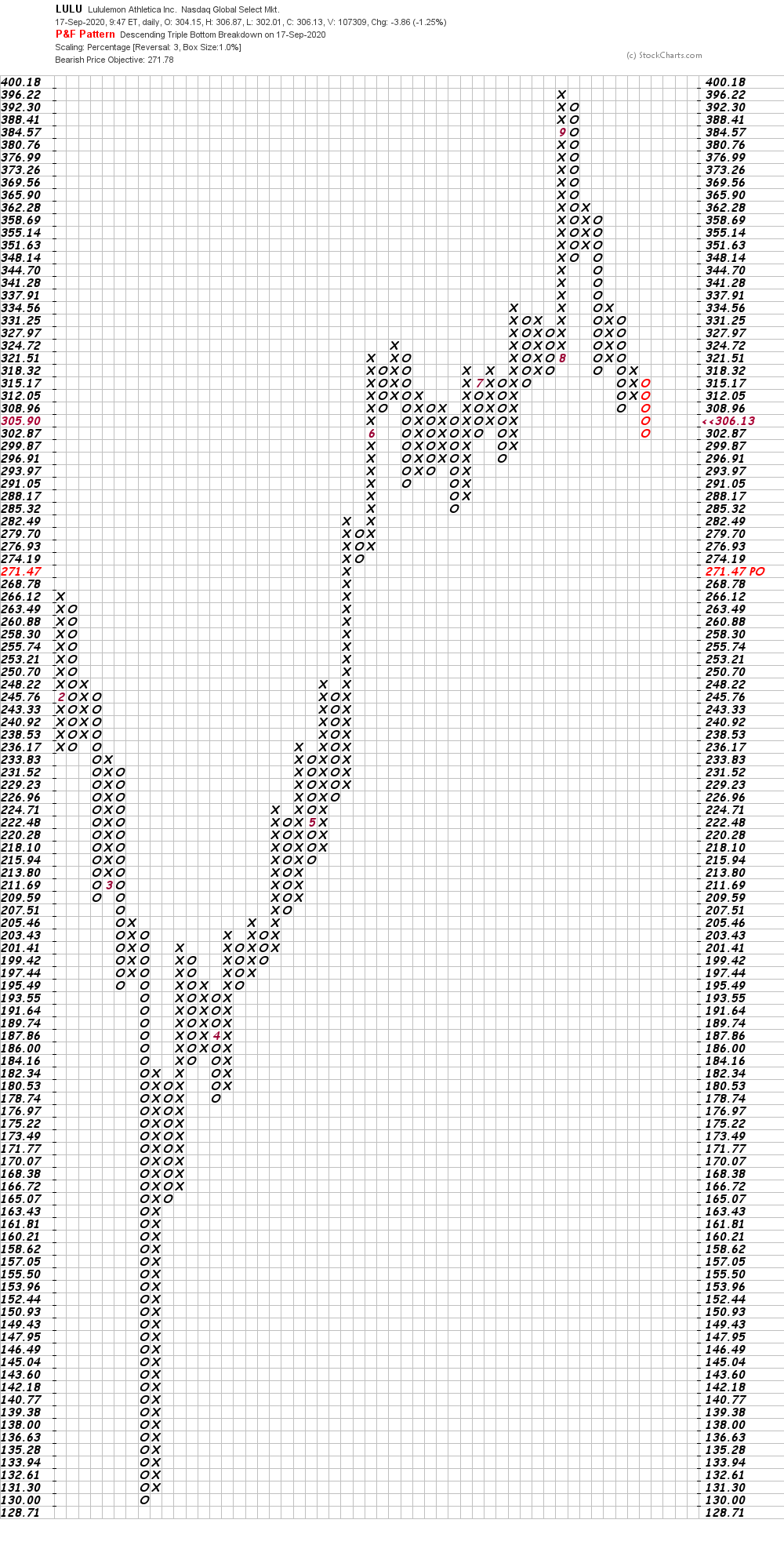 Bottom-line strategy: LULU is currently pointed down but support is still holding so we may want to give it the benefit of the doubt. I tend to be risk averse so I would wait to see a reversal pattern from the candle chart or a close above the high of the low day on a bar chart before going long.
Get an email alert each time I write an article for Real Money. Click the "+Follow" next to my byline to this article.
TAGS: Investing | Stocks | Technical Analysis | Apparel | Retail | Mad Money

The Hardest Thing to Do When Trading Stocks

Like most things in the stock market, it isn't nearly as simple as it sounds.

A Market Grappling With What It Hates Most

The uncertainty surrounding this election is unlike anything we have ever experienced before.

Now on My Radar: Shift4 Payments

The first glance of the business puts it in the right long-term category over the next five years.

Is It Time to Sell Seagen Shares?