I want to talk about what I term the "Hidey Holes" in the market. You know what I'm talking about, the stocks everyone has been hiding in for the last several months. Yes I know everyone sees Apple (AAPL) and its gap down two days ago and we've already discussed the utilities, which are down 15% in a straight line.

It used to be -- before this week -- folks would say they held Apple because it had held up so well. Now we hear that they sold already, or at least they say so. But what about the staples? Now everyone seems to be hiding out in the staples. So let's look at the exchange-traded fund for the group, the Consumer Staples Select Sector SPDR Fund (XLP) .

If you are wondering if that is a head-and-shoulders top, yes, I think it is. And sure I could have drawn a neckline at $66, but does it really matter? XLP is down 12% in six weeks and folks are still hiding in staples.

Colgate-Palmolive (CL) is at a two-year low. Procter & Gamble (PG) is down 20% since the market made its lows last spring. Philip Morris International (PM)  is also down 20% since the spring. I mean someone is selling the Staples, no matter how much you hear that folks are hiding in them. Be careful there.

As for the market as a whole, I did not expect so much of a give-back on Thursday, but that is what we got. So how did the statistics look? The same as they have looked.

For example, the number of stocks making new lows on the New York Stock Exchange chimed in at 820. Yes this number is still high, but a week ago there were 1,106 new lows. Heck, on Tuesday there were 893 so there were fewer new lows.

For Nasdaq there were 770 new lows. A week ago there were 1,224. On Tuesday there were 893. So here too the index movers are taking down the indexes but there are stocks that -thus far-refuse to go lower. 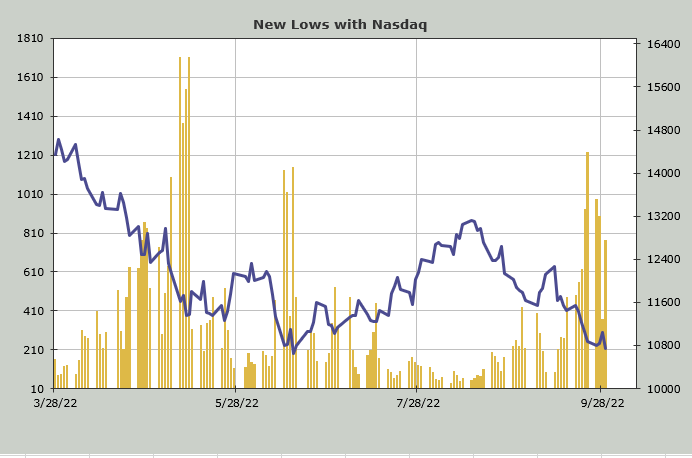 Then there is the National Association of Active Investment Managers (NAAIM) who have dropped their exposure to 12.6. In March 2020 that number got to 10. 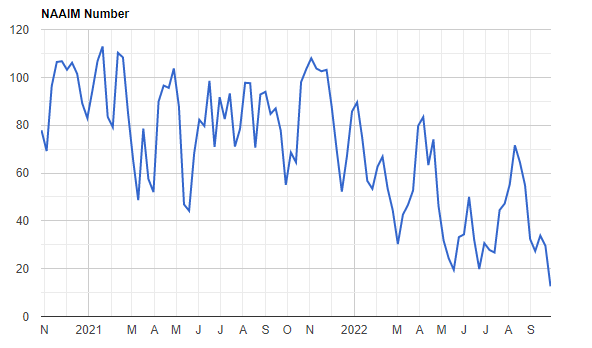 The put/call ratio has remained high this week, but the new wrinkle is that the International Securities Exchange Equity call/put ratio chimed in under 1.0. It does not do that often. In 2022 it has done so only four times. I have noted on the chart below those times. Each instance was quite close to an oversold rally.

I would also note that bonds were relatively calm and the dollar was down for the second straight day so we can't really blame them. Maybe it's just that folks are finally selling their Hidey Holes.

I still think we should enjoy an oversold rally in early October.