By now it should be pretty clear to all market players that the nature of the market has changed. Sure you hear it from all the talking heads, but honestly you know it from your portfolios, don't you? The best chart I have to help you visualize it is a chart I showed here on the first trading day of 2022.

It is the relationship of the S&P 500 to Nasdaq. Beginning some time in 2019 - well before anyone ever heard of Covid - Nasdaq began a period of outperformance that was unstoppable. When the chart heads down, Nasdaq is outperforming the S&P 500 and when it heads up the S&P is outperforming Nasdaq. But that changed abruptly in February 2021 (red arrow). The trend exhausted itself.

I have noted in recent months that I believe that period of time was what we would look back on as the peak in speculation. Think about it. SPACs peaked. Biotechs (talk about speculative!) peaked. The Meme stocks peaked. Nasdaq clocked in with more than 700 stocks making new highs, all signs of serious speculation.

In May of 2021, that wave of selling in the tech stocks peaked on a short-term basis and we had a decent summer rally in tech. But it never regained the all encompassing, only game in town, type of speculative activity we saw earlier in the year. Sure, Tesla had a big run as did Apple, and even Nvidia, but it was never all encompassing the way it was in January; it was already narrowing.

Then you can see in November that balance between the S&P and Nasdaq changed again (blue arrow) as the less speculative S&P took the lead and it hasn't changed in nearly three months. At some point we should get a peak in the tech selling and Nasdaq should enjoy another short period of outperformance but this is clearly a change from what most new investors are used to.

So can Nasdaq rally? I think it can. Using my Oscillator it is now oversold. It is the same level it was in early December and late February last year. Surely astute traders will note, neither of those times was a low where Nasdaq was up, up and away but rather at both times were enough for a tradeable rally. 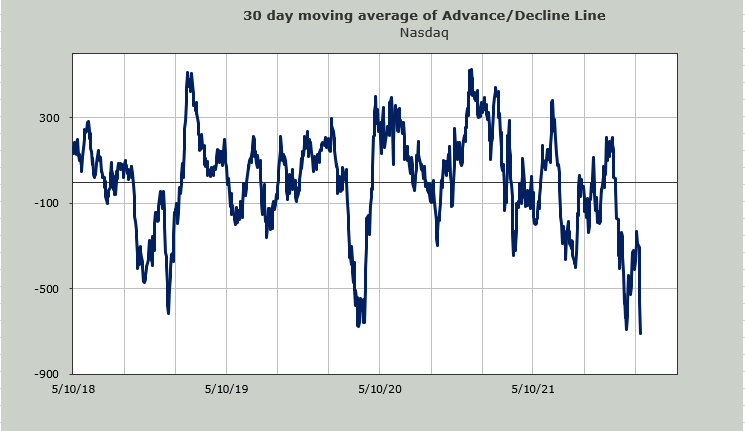 In fact, if I show you the math behind these two charts, I think you will agree it supports an oversold condition. These are moving average lines so we look back 10 and 30 days ago to see what numbers we are dropping. When we drop a string of red numbers, we consider it oversold. Here are the numbers we are dropping; you can see there is a lot of red here: 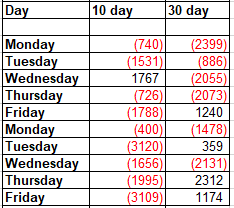 Last week, I showed you the Nasdaq Momentum Indicator and how when I keep walking Nasdaq down 100 points a day, by Wednesday of this week the indicator not only stops going down it heads upward which is the definition of oversold. That remains the case. Also, the exact day is not written in stone but rather we are in the zone to start looking for it.

The explosive number of stocks making new lows on Friday represents a change as well. Nasdaq clocked in at over 1,300 new lows (the NYSE had over 500 so the selling in Nasdaq finally spilled over to the NYSE). That means the selling didn't dry up but rather accelerated into a mini panic.

On the sentiment front, we have already noted the Investors Intelligence bulls are a smidge under 40% and I fully expect this week they will be lower, perhaps significantly. In March of 2020, the bulls got to 30%. Even in the depths of the 2008 bear market, the low reading was 22%. The low reading in the 2000-2003 time period was 28%. Each time led to a bounce.

The put/call ratio finally jumped on Friday. The equity ratio cranked up to 0.82 which is the highest reading since spring 2020. The total put/call ratio chimed in at 1.26; in spring of 2020 it was just over 1.80 for the peak. You can see it can go higher but we have finally seen selling in stocks combined with put buying.

Finally I have been harping away about the Daily Sentiment Index for Nasdaq. Friday it became a teenager at 15. A reading in the single digits is my point of 'enough' (it got to 4 in March 2020). I am uncertain if it makes it to single digits on this particular leg down but I think we can all agree that if Monday Nasdaq is down a decent amount, it should certainly flirt with single digits. A teenage reading could be enough for now.

With all of these indicators put together, I will be on the lookout for a rally in Nasdaq this week.