Darrell said Logitech had a solid quarter despite all of the macroeconomic noise. The company delivered 6% growth. Darrell was bullish on Logitech's video conferencing products in particular, saying that their modern solutions are a tenth of the cost of traditional systems. Video conferencing, he said, will be a big business for Logitech going forward.

When asked about China, Darrell noted that Logitech has been in China for 25 years. The country is their No. 2 two market as well as home to much of their manufacturing. Logitech has been able to mitigate the effects of tariffs so far by cutting costs and raising prices where needed, while also moving some factories outside of China.

Now let's turn to the charts.

In the daily bar chart of LOGI, below, we can see a weakening pattern. Prices have traded sideways since April but the indicators have weakened. Prices are between the declining 50-day moving average line and the rising 200-day line.

The daily On-Balance-Volume (OBV) line has been declining from late July telling us that sellers of LOGI have been more aggressive. The trend-following Moving Average Convergence Divergence (MACD) oscillator has been hugging the zero line and that tells us that LOGI does not have any price strength so a turn lower is very possible.

In the weekly bar chart of LOGI, below, we can see that prices are just slightly above the rising 40-week moving average line. The weekly OBV line has been in a decline since early 2017 and that is potentially a very bearish condition.

The weekly MACD oscillator is above the zero line but poised to turn to the downside.

In this Point and Figure chart of LOGI, below, we can see a modest upside price target of $44. A trade at $39 is likely to weaken this chart. 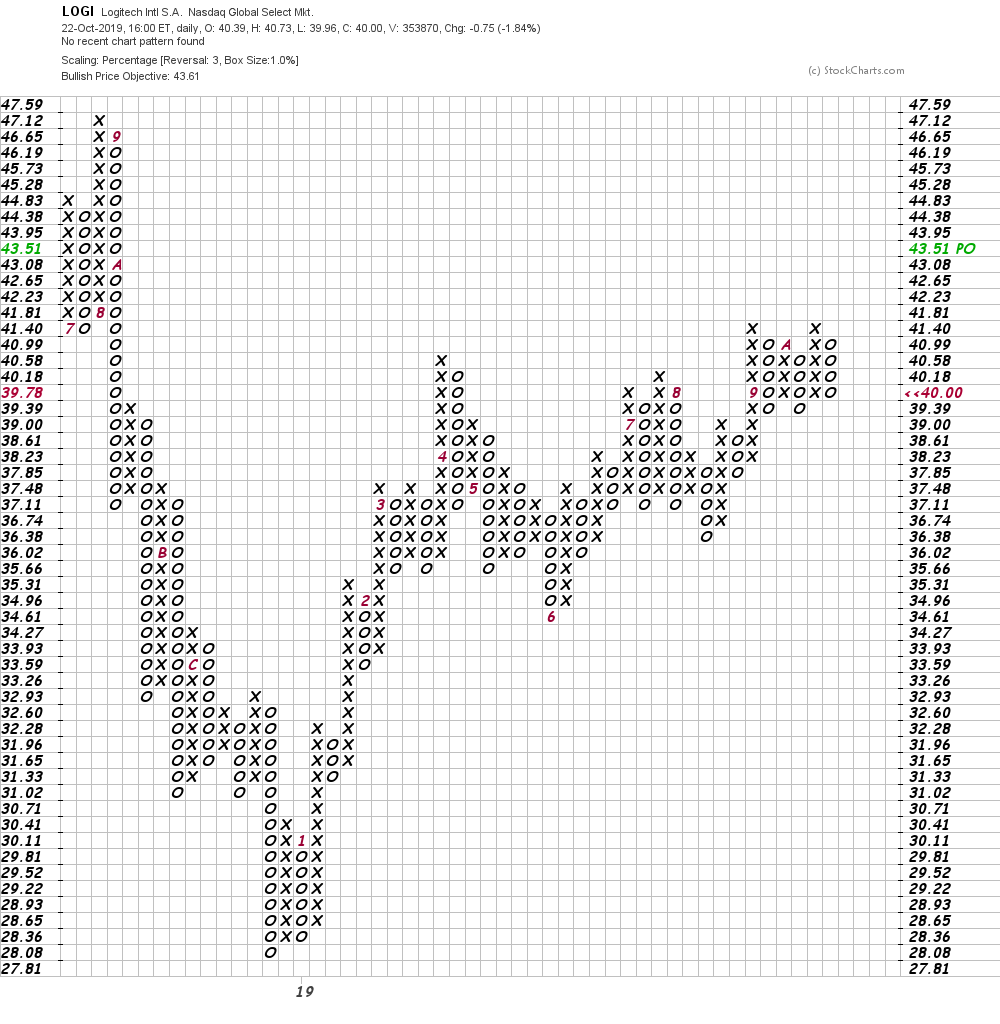 Bottom-line strategy: The fundamental story and the chart pictures do not match up so I would look for trading opportunities elsewhere as I do not feel confident with this security.

Get an email alert each time I write an article for Real Money. Click the "+Follow" next to my byline to this article.
TAGS: Investing | Stocks | Technical Analysis | Technology Hardware & Equipment | Gaming | Mad Money | Executive Interview