For his "Executive Decision" segment of his popular Mad Money program on CNBC, Jim Cramer checked in with Bracken Darrell, president and CEO of Logitech International S.A. (LOGI) . Logitech is the computer and gaming accessory maker and it just posted a 13-cents-a-share earnings beat and raised its 2019 guidance.

Darrell said it was another strong quarter for Logitech, with sales up 8% overall and its top-three categories growing by double-digits. Profits were also stronger, up 22% year over year. He added that the explosive growth of the game Fortnite will not be the last time we see a breakout hit enter the market.

When asked about the company's manufacturing, particularly in China, Darrell explained that about 50% of Logitech's products are made by the company, while the other 50% are outsourced to other factories, typically in China. But he said Logitech has become an expert at moving production where it makes the most sense.

Let's check out the charts and indicators this morning to round out our analysis.

In the daily bar chart of LOGI, below, we can see a bottoming pattern from November. Prices have closed above the bottoming 50-day moving average line but remain well below the flattening 200-day moving average line. The volume histogram below the price chart shows an increase in turnover from late November and the daily On-Balance-Volume (OBV) line has been stable since late October and has increased from late December. This is a bullish divergence when compared to the price action which made lower lows into late December.

The trend-following Moving Average Convergence Divergence (MACD) oscillator turned up in late October with a number of cover shorts signals and is now at the zero line for an outright go long signal.

In this weekly bar chart of LOGI, below, we can see the long rally from $15 back in 2016 to $50 in 2018. The decline was approximately 60 percent of the prior rally and roughly fits in correction parameters if you use Dow's numbers or Fib numbers or Gann numbers.

Prices are below the declining 40-week moving average line but the weekly OBV line is showing some improvement in recent weeks. The weekly MACD oscillator is poised for a bullish crossover and weekly cover shorts buy signal.

In this Point and Figure chart of LOGI, below, we can see an upside price target of $42.63 being projected. 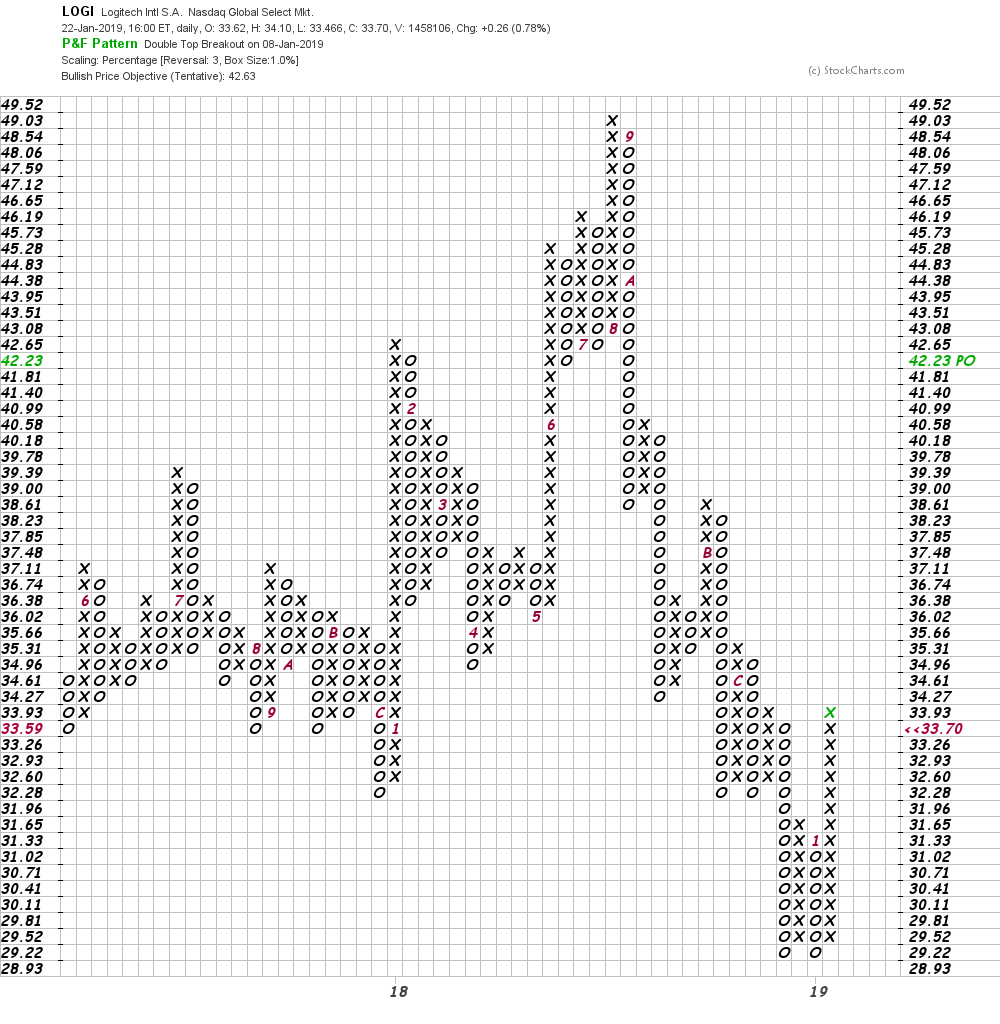 Bottom-line strategy: The downside of LOGI looks exhausted and we have an upside price target on our Point and Figure chart. Aggressive traders could probe the long side of LOGI here if they can risk below $30 in case there is another retest of the late December low.

Get an email alert each time I write an article for Real Money. Click the "+Follow" next to my byline to this article.
TAGS: Investing | Stocks | Technical Analysis | Software & Services | Gaming

Here's the Secret of How 'Hidden Assets' Can Be Very Valuable

Let me show you how writing calls in tax-sheltered, or tax-free accounts is a legal way to allow for higher-than-annual individual maximum contribution limits.