Shares of Logitech International S.A. (LOGI) have fallen about 14% over the last last month and are down notably from the highs in August. This is a great company with strong secular growth that just reported a "fabulous" quarter, Jim Cramer said Wednesday night on Mad Money. To find out what's going on, he sat down with Bracken Darrell, president and CEO of Logitech.

The company has several secular growth drivers, the first being gaming, Darrell said. While gaming can have its ups and downs it will continue growing over the long term. The other is video, which continues to see strong growth and is benefiting from the uptick in video conferencing.

Let's see if this bullish sounding fundamental story has translated to the stock charts.

In the daily bar chart of LOGI, below, we can see a decline from late August to late December followed by an approximate 50% retracement into late April. Prices have begun to weaken again this month with LOGI back below the declining 200-day moving average line and the peaking 50-day line.

The daily On-Balance-Volume (OBV) line rolled over in April and has weakened this month signaling that sellers of LOGI have become more aggressive again -- like the September-December period. The Moving Average Convergence Divergence (MACD) oscillator has moved below the zero line for an outright sell signal.

In the weekly bar chart of LOGI, below, we see a possible major top formation (think head and shoulders) going back to early 2017. Prices are below the declining 40-week moving average line and the weekly OBV line has been in a decline from May of 2017 -- a long period of distribution (selling).

The weekly MACD oscillator moved above the zero line in April but it has since crossed to the downside.

In this Point and Figure chart of LOGI, below, we can see a downside price target of $33 being projected. 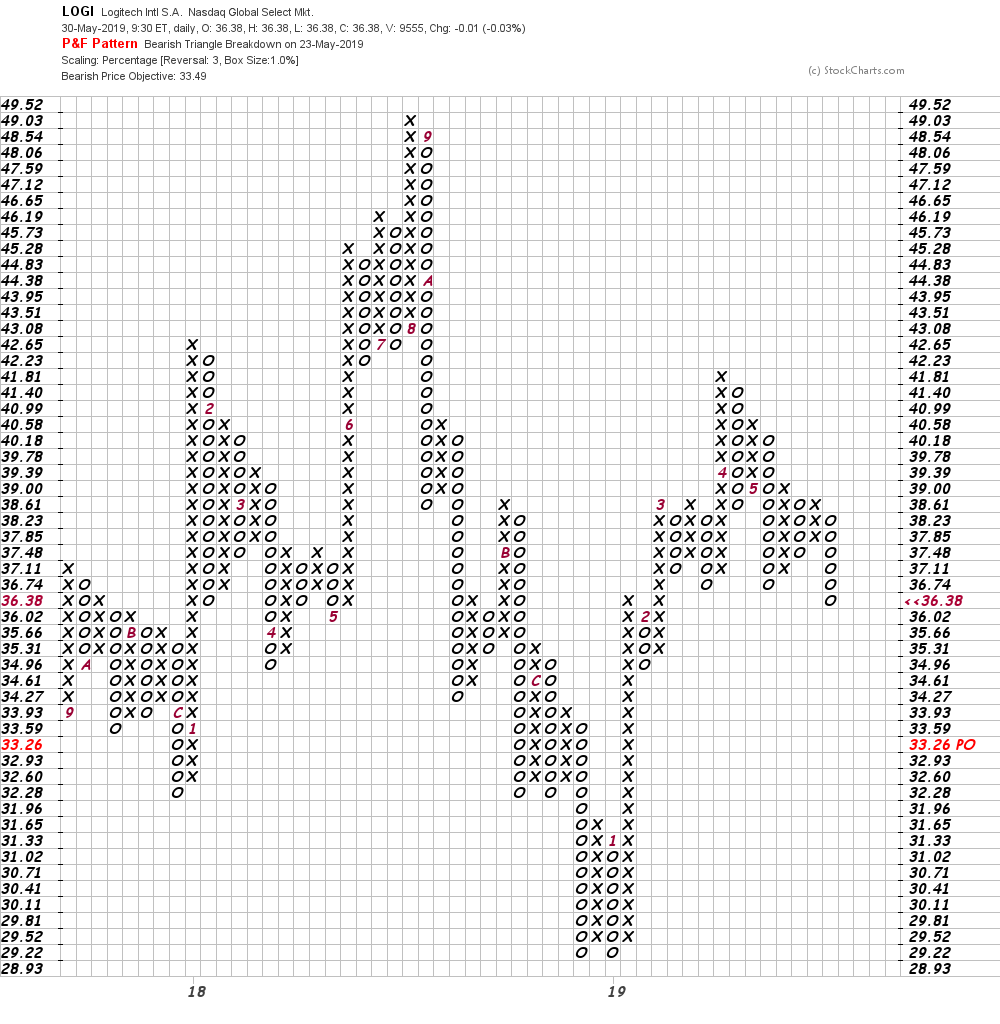 Bottom-line strategy: Despite a promising fundamental story, the charts of LOGI look like they are pointed lower. Look for a decline to the $33 area or lower in the weeks ahead.

Get an email alert each time I write an article for Real Money. Click the "+Follow" next to my byline to this article.
TAGS: Investing | Stocks | Technical Analysis | Technology | Technology Hardware & Equipment | Video Games | Gaming | Mad Money | Executive Interview