In his first "Executive Decision" segment of Mad Money Tuesday night, host Jim Cramer spoke with Bracken Darrell, president and CEO of Logitech International (LOGI) , the computer peripherals maker. The company just posted sales up a staggering 85%, but the shares responded by falling 3.1% as investors assumed that Logitech's sales will begin to cool as the world returns to normal.

Darrell said as the world returns to work, many employees will return to a hybrid model where they spend some days at the office and other days at home. That means multiple workspaces that need audio, video and accessories, Darrell said.

We last looked at LOGI back on Oct. 21 and recommended that, "LOGI has surprised on the upside with the fundamental numbers and the technicals. Prices are pointed up but the big question is how do we go long LOGI without risking too much. Aggressive traders could look to buy a dip just below $90, risking below $84. If prices fill more than half of Tuesday's gap they may fill all the gap." This advice turned out to minimize losses as prices eventually slumped to $75 in early November before turning higher again.

Trading volume did not increase when prices broke out to new all-time highs in December and the On-Balance-Volume (OBV) line stalled in early January before turning lower. The Moving Average Convergence Divergence (MACD) oscillator has crossed to the downside for a take profit sell signal.

In this weekly bar chart of LOGI, below, we can see a strong chart picture with a hint of weakness. Prices have been in a strong uptrend from March and rising above the positively sloped 40-week moving average line. Prices are not extended (overbought) when compared to the 40-week line.

The weekly OBV line shows strong gains in 2020 but the start of a dip in January of this year. The MACD oscillator has been showing on again, off again crossovers since September.

In this daily Point and Figure chart of LOGI, below, we can see a potential downside price target in the $88 area. Support might develop in the $88 area but a weak broader market could precipitate a deeper reaction. 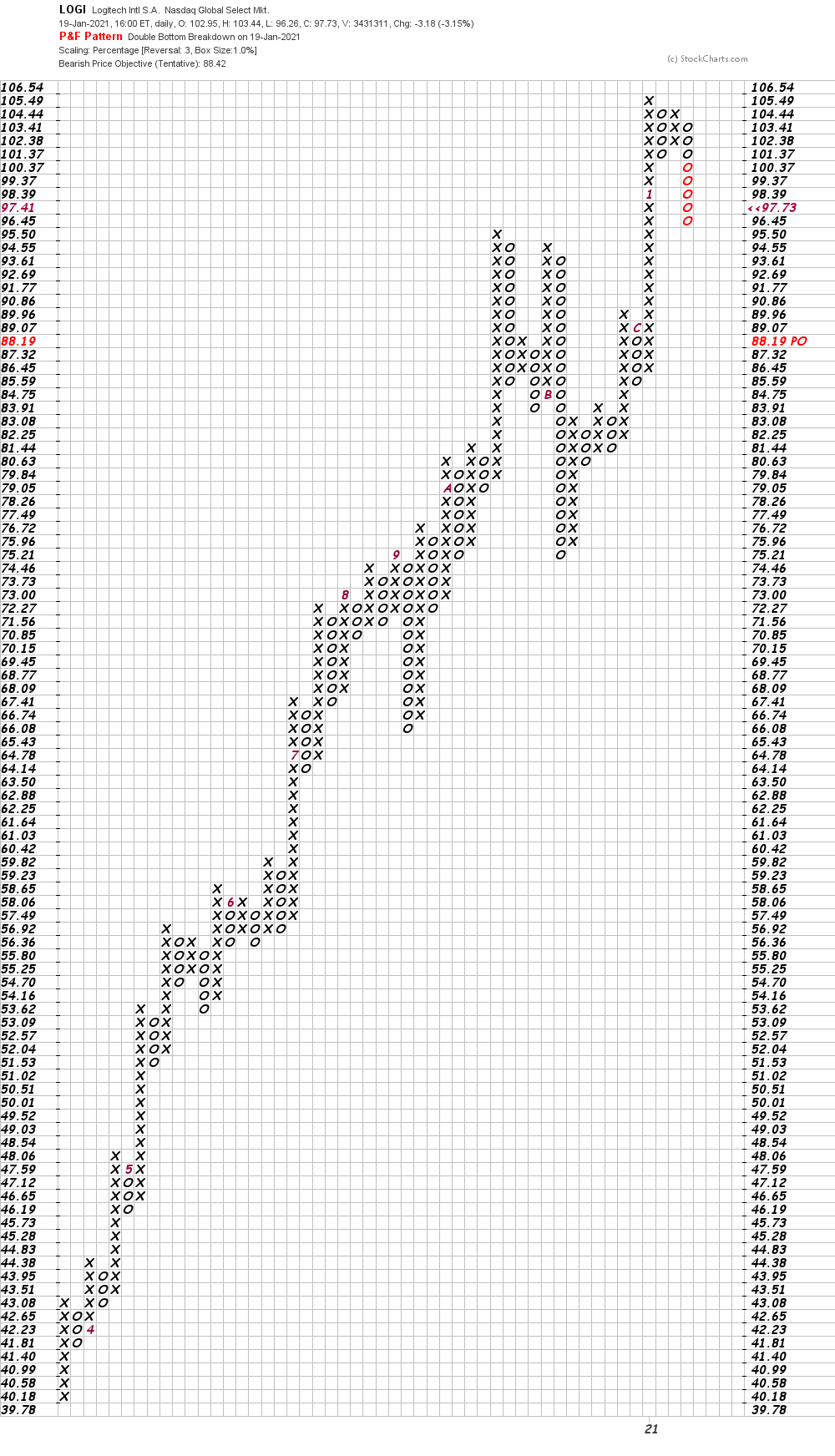 In this weekly Point and Figure chart of LOGI, below, we can see a potential upside price target of $166.

Bottom-line strategy: A stock that declines in the face of what appears to be bullish news tells us that investors are looking ahead to weaker fundamentals. Our Point and Figure chart suggests risk down to the $88 area. Avoid the long side for now.

Get an email alert each time I write an article for Real Money. Click the "+Follow" next to my byline to this article.
TAGS: Earnings | Investing | Stocks | Technical Analysis | Technology Hardware & Equipment | Gaming | Mad Money | Executive Interview | Consumer Discretionary