Woke up on this side of the dirt again, didn't you? Undefeated. Still. How old are you now? A new personal best. Nice goin', Slick. What's better than a box of rocks? A bucket of sunshine. Understand? Let me explain. You've known since you were a kid, that if all you had was a box of rocks, then darn it, a box of rocks will do. You see, it's good to be smart. Really good. It's also good to have guts. At the end of the day, if you can only have one of them, what good are smarts with no guts, sometimes... just sometimes, guts are enough.

Your success in life, in your relationships, in the markets is really going to be far more about how you perceive your circumstance, how courageous you can be when bad things happen and how well you motivate yourself to adapt and overcome... Baloney. It's never that easy. That's why it is worthwhile. That's why we dig. That's why we rise. That's why we burn with energy in the middle of what others call the night.

It's not because we are excellent, it's because we pursue excellence at all times. Treat every new morning as a gift. Treat every meal as feast. Act every second of every day as if your mother was watching. Now, dedicate thyself to pure effort and honor clean. Then get up and make mother proud.

The S&P 500 has had quite the run in June, closing on Thursday afternoon at 2954 and change, fractionally higher than the intra-day high of May 1. How bizarre this world is. Our broadest equity market index closes virtually unchanged from the highs of May, yet up 8.3% from the June lows. That's a whole lot of opportunity. In both directions.

The fragility of this market rally was put on display midday on Thursday, as markets braced for a U.S. response to Iranian aggression over international waters that cost the U.S. Navy a $130 million reconnaissance drone manufactured by Northrop Grumman (NOC) . In fact, it turns out that the U.S. was indeed razor close to a military response, when on a dime markets turned higher again as President Trump seemed to offer Iranian leadership a way out -- allowing the possibility that the drone may have been shot down by a rogue actor.

Hence, on a day where markets might have reacted to collapsing Treasury yields with more pedestrian gains, the energy sector supported by soaring WTI crude futures and the industrial sector supported by the aerospace and defense industry dragged broader indices toward gains of nearly a full percent.

Treasury markets likely overreacted to the FOMC's forward signaling on policy, I would think that there could be some back-up there on Friday, at least early. There's still plenty of wood to cut ahead of the G-20 summit in Japan next week, which could significantly alter market perception once again.

What is clear, though, is that traders are trying to anticipate a rebirth of a near-ZIRP (Zero Interest Rate Policy) environment that forces markets into risk assets, or what is known to equity traders as TINA (There Is No Alternative).

Lockheed Martin (LMT) has truly led the recent strength in defense stocks as hyper-sonic weaponry has been successfully tested and now on Friday morning, Turkey's head of the Defense Industries Directorate is claiming that the U.S. may not unilaterally remove Turkey from the F-35 fighter program. How that plays out in Washington later will be anyone's guess. 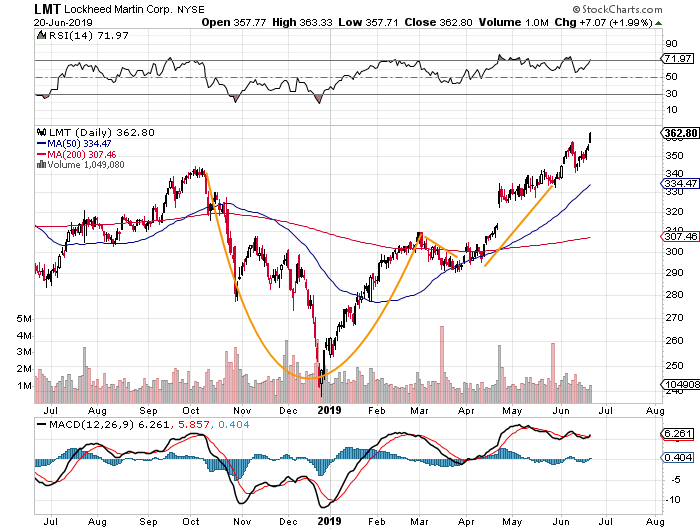 However, one can see that the stock has significant momentum behind it and now appears to be closing in on our $375 target price. Just a thought that I had overnight, but perhaps I move my panic point up from the $312 that I had already given you to the $334 level (currently the 50-day simple moving average).

I mean, I still love this name, and I still think it will get where I thought it was going, but we have a very large winner here now -- and who wants to screw that up? 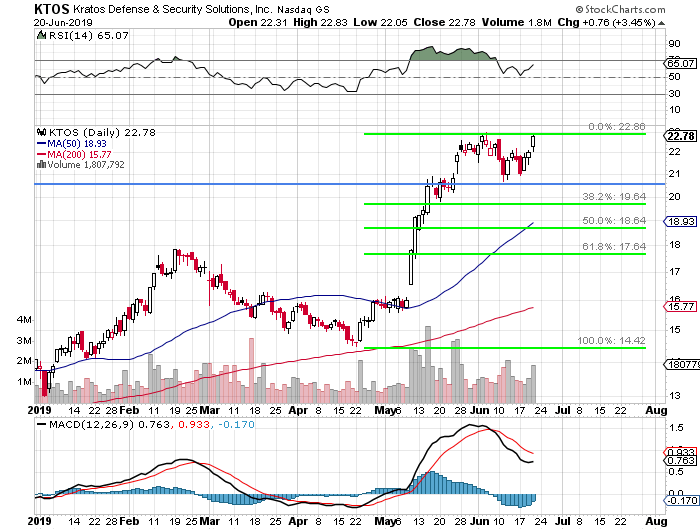 Now, with drones taking center stage, even after lightening up the above target, we still have a nice position in Kratos Defense (KTOS) . What does the chart tell us? Well, we could say that this looks like a double top. It think that this looks like a developing period of consolidation. That could be bullish. I am biased though. I have been in this name since it was trading close to $7, so I am in danger of falling in love with the stock. That is forbidden by my own set of rules.

In order to protect myself from seeing what I want to see due to potential bias that I may not recognize in myself, I am going to raise my panic point for this name from $17 to the 50% Fibonacci retracement level of this Spring's pop at $18.64 (I'll probably round that out to $18.50), and shoot for $24.50 on the upside, given that this is the depth of the current channel. Oh, I almost forgot.. Rock and Roll.

If You Listen Very Hard

I honestly don't know if the forest will echo with laughter (I do know that Howler monkeys will scare the snot out of you), but gold is seriously in play. The entire commodity complex with the incredible exception of natural gas experienced the benefits of a U.S. dollar suddenly weaker against most other reserve currencies, the euro in particular.

Yes, gold is and should be, in my opinion, treated as something of a safe haven. A barbarous relic you say? Then why do so many central banks continue to add to inventory levels, I say? The day that the bad guys show up, you'll have a couple of cans of something edible, the gasoline in your tank, hopefully some potable water, and if you were smart, some gold. That said, it is important to understand the breakout for the pretty, yellow metal. If the dollar holds at this level, will gold? As the great author Jim Rickards will ask (paraphrased), is gold up versus the dollar, or is the dollar down versus gold?

Still, while most industrial metals have struggled for the most part of late, gold futures had already been showing signs of life, even before the dollar took a Thursday plunge. Thursday's action left physical gold 6.7% higher just for June, while a net $885 million has been invested in the SPDR Gold Trust ETF (GLD) over the same period.

You all know by now that I advocate some kind of exposure to gold, that a model asset allocation would include a base position in the physical (5% of investable assets?) and a more manageable position in paper gold (anywhere from 0% to an additional 5%) that the investor can manipulate more easily in response to market trends. Obviously as the valuation of one's other asserts are also likely to swing wildly, maintaining any targeted allocation in real time becomes practically impossible, and a periodical approach is more realistic for retail investors.

Oh, one other thing to remember, non-yielding assets (such as gold) out-yield $12.5 trillion worth of planet earth's aggregate debt load, so there goes that argument. Thanks, Europe and Japan. I would not be surprised or taken aback if there were to be some profit taking in this space on Friday.

Lastly, my thoughts on Facebook's (FB) new digital currency? While, yes it is gimmicky, I believe it has a chance. The fact that Libra will be backed by an actual basket of fiat currencies will make it less volatile than other forms of cryptocurrency. The fact that there are so many corporate investors in the idea, and that across Facebook's platforms are so many nearly captive potential consumers makes Libra possibly useful as a medium of exchange unlike Bitcoin, for example. I see all of these ideas as potentially drawing investment dollars away from gold in the short-term, but the day that the grid goes down, physical gold will function as intended.

Bitcoin has soared of late as so many global citizens have been forced to find a way to get their wealth out of unstable (Venezuela), or rapidly slowing (China) economies. The most famous of all crypto-currencies has proved itself useful, however, Facebook's plan will in my opinion, threaten Bitcoin from that angle. Time will tell.

Get an email alert each time I write an article for Real Money. Click the "+Follow" next to my byline to this article.
TAGS: Economy | Federal Reserve | Futures | Gold | Indexes | Investing | Markets | Stocks | Technical Analysis | World | U.S. Equity