Jim Cramer had plenty to say about some of the stocks that callers offered up during the Mad Money Lightning Round Friday evening. With Lockheed Martin Corp. (LMT) , Cramer said, "I like Lockheed very much. I think they're doing good things."

Let's see if we can find some good things about the charts.

In the daily bar chart of LMT, below, we can see that prices have quickly retraced about half of the February/March decline. Trading volume has been very heavy from the middle of February, which suggests we have seen a movement of ownership from weak hands to strong hands as prices fell from around $440 to briefly below $270.

The daily On-Balance-Volume (OBV) line declined from early February telling us that there was more aggressive selling of LMT but the decline in the OBV line was much shallower than the price decline.

The 12-day price momentum study shows lower lows in March so the recent rally happened without the benefit of seeing the pace of the decline slow before the rebound. It can happen. The Moving Average Convergence Divergence (MACD) oscillator is not shown but it has crossed to the upside for a cover shorts buy signal.

In the weekly Japanese candlestick chart of LMT, below, we can see that prices retraced most of the rally from late 2018. The most recent two weeks of price activity looks like a very large bullish engulfing pattern, which is a type of bottom reversal. This recent long lower shadow tells us that the price lows were rejected.

The weekly OBV line shows only a very minor dip recently suggesting that prices overreacted when compared to the volume. The 40-week moving average line just turned lower and the MACD oscillator is close to breaking the zero line for an outright sell signal.

In this daily Point and Figure chart of LMT, below, we can see a potential upside price target in the $556 area is being projected. 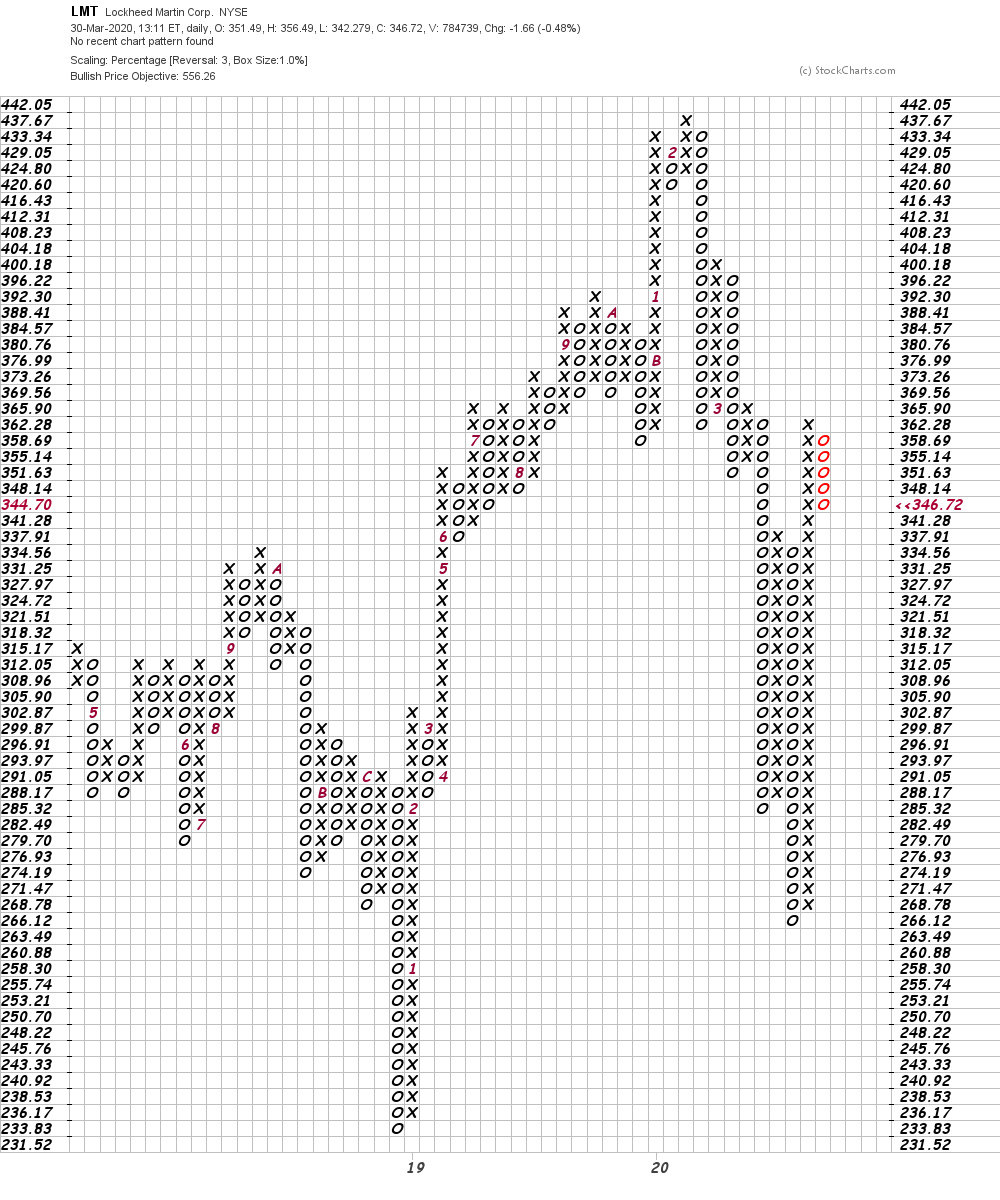 Bottom-line strategy: LMT might trade sideways for a period of time in the $330-$375 area before the next move higher. Traders could consider going long LMT in the lower half of that range risking a close below $315.

Get an email alert each time I write an article for Real Money. Click the "+Follow" next to my byline to this article.
TAGS: Investing | Stocks | Technical Analysis | Aerospace | Defense | Mad Money

If the market can't sell off on this news then what reason does it have to dip?